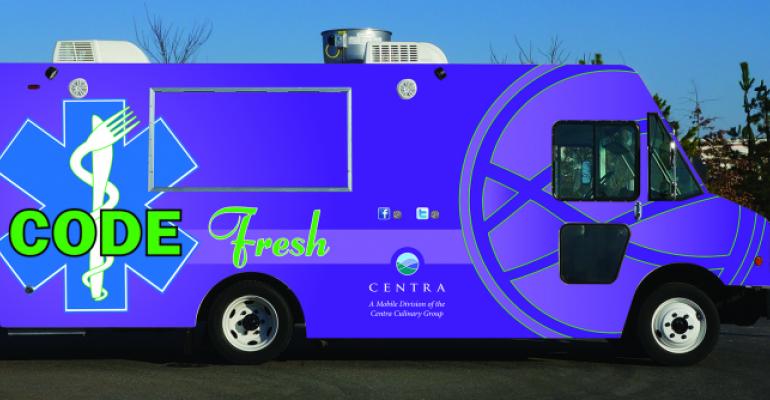 Centra Health System, in Lynchburg, Va., got a lot of mileage out of the Code Fresh food truck it launched a year ago. The truck not only offered more remote locations of the system’s footprint an in-house dining option but also served to promote Centra to the larger community through appearances at various local events.

But everything can stand some improvement, so when a late winter snowstorm grounded the truck earlier this year (it was sidelined for about five weeks from mid February to the end of March), Centra’s dining department decided to use the interruption to do a “full reboot,” according to Nutrition Services Director Wren Roberts.

“We revised the staffing model,” he says. “When we first launched, we went with two FTEs to run the truck. Now, we’re at 1.5 FTEs. With that we streamlined the menu."

Basically, they take what is being served at that day’s station (available as either a salad or wrap) at the hospital’s own Crossroads branded action station and made that the day’s feature menu item at Code Fresh too, along with a specific grilled item (turkey burger, hamburger, chicken breast, etc.). The concept runs on a 20-day cycle, five days a week, providing plenty of day-to-day variety.

Utilizing the Crossroads platform added more efficiency because the ingredients are the same and the central kitchen prep team could now produce for both the fixed station and the truck each day.

“They have to be there anyway, so we just bumped their production a little each day to cover for the mise en place for the food truck,” Roberts says. “It created some economies of scale on production.”

The new truck menu is also smaller than the previous one, not only reducing the needed labor component but also boosting order turnaround, an important consideration for customers with short lunch breaks.

“Before, we were finding that the average wait time was over eight minutes,” Roberts says. “With the new menu, it’s three and a half to four minutes.” That has helped contribute to more transactions, bumping up revenues, though the increase is “not huge,” Roberts concedes.

Another change has been how the truck is used.

“Last year our goal was to utilize the truck on weekends for special events,” Roberts says. “There were events where we grossed a lot of sales and others where few people showed up. But what we learned was that it was so costly from a labor standpoint because usually there was so much prep involved for these weekend events. Now, I’m not saying we don’t do them anymore, but we’re very, very picky about them. So while there’s the potential for high top line sales, it goes back to managing that labor cost and the amount of prep time it takes to pull one of those off.”

However, Roberts stresses, the No. 1 priority for Code Fresh was to “reach our off-campus Centra employee population that could not fully utilize their employee cafeteria discount. We got a lot of feedback saying, ‘Hey guys, we get a 25 percent employee discount but we don’t work there. So how do we take advantage?’ So instead they’re going to Subway and paying six or seven dollars for an average check. With us, the average check is around $4.10.”

“We learned so much in that first season,” Roberts concludes. “It really comes down to a quick menu, quick order to pickup time and managing your food and labor costs. That cost reduction especially was huge and allows the truck to be sustainable from a financial standpoint.”