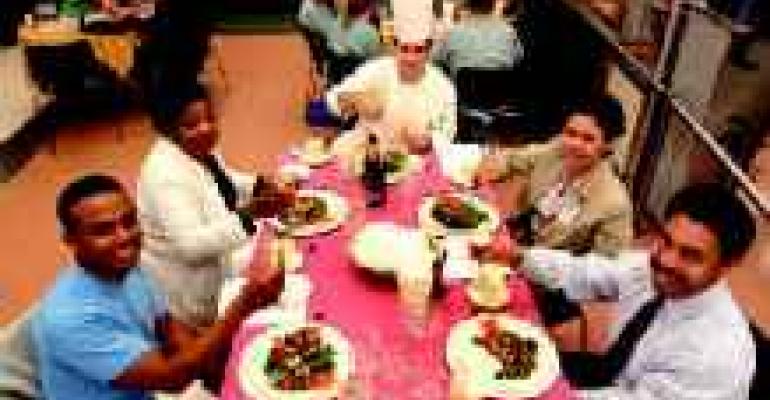 A recent "chefs table" promotion-was a big hit at UCLA Medical Center, says Executive Chef Mark Dyball. "We had 200 people enter the competition," he reports, "To enter, they had to name some of their favorite dishes from the Cafe Med repertoire, which we then put on the menu during September and October."

But the big prize was an invitation to join Dyball for a three course meal that he cooked and served. At the end of the promotion,-four names were drawn (one subsequently had to withdraw because of a conflict) to determine the guests for this special meal.

For maximum merchandising impact, the table for the meal was set up in the middle of the cafeteria. "It generated a lot of interest from our customers, who wanted to know how they also could get to eat with the chef, and when the next event would be," Dyball says. Dyball's menu added to the appeal. For starters, there was Basil Marinated Shrimp served on a bed of Watercress with Roasted Baby Beets, Toasted Pine Nuts and Pomegranate, washed down with non-alcoholic champaign. The main course was a Fresh Herbinfused-Chicken Breast, charbroiledand finished in the oven, served on a bed of Caramelized Apples with a Calvados Cream Sauce. It was served with Gratin Potatoes and Leeks Braised in White Wine and FreshThyme. Dessert consisted of English Bread and Butter Pudding with a Brandy Cream Sauce.

"This is my Mothers recipe," Dyball comments, "and when we put it on the menu we usually sell over 400 portions."

The next chef's table is scheduled for early next year.