As a competitor on NBC’s athletic competition show “The Titan Games,” Josh Ingraham lifts hundreds of pounds, hones his mental and physical strength and brings it all back to his day-to-day work of helping people get healthier through nutrition.

Hosted by Dwayne “The Rock” Johnson, “The Titan Games,” is currently airing on NBC, showcasing a battle of strength for 64 final contestants. In that group is Josh Ingraham, executive chef with Morrison Healthcare at the Cleveland Clinic in Ohio. He was chosen out of more than 100,000 applicants, and he’s the only chef in the final group.

Ingraham has been on his own personal wellness quest for the last couple of years, balancing that with his family and career at the Clinic. When he was selected to compete in the show and travel to California for filming, the timing wasn’t ideal. 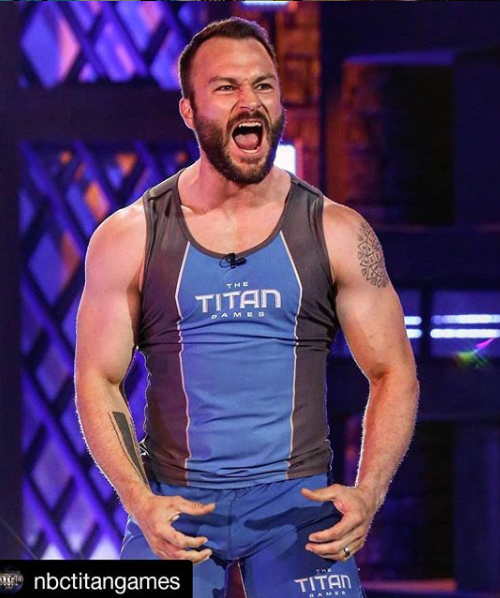 “It was a tough decision to take the time off as our team at the Clinic was just about to launch our first room service kitchen,” he says, referring to Morrison’s long-term plans coming to fruition.

Ultimately, he packed his bags and put his trust in a team that he has helped shape over the last couple of years.

“I had complete confidence in our chefs and directors to open without a hitch and I expected room service to begin perfectly,” Ingraham says. “The chefs would send me photos of the food and it looked amazing.”

As he competed, Ingraham didn’t drop the ball on his other very full-time job: being a dad.

“I couldn’t have traveled any other way but with my loving family and fully supportive wife and kids…but it was difficult to manage the filming schedule around changing diapers and nap time with the kids,” he says.

The schedule was brutal: filming at night, back to make breakfast for the kids in the morning and surviving on little sleep pushed Ingraham to his limits, but he was running on pure adrenaline, he says. “The excitement of being on this incredible show was enough to keep me going.”

A plant-based diet—which he adopted in 2017—was another source of fuel for Ingraham, lining up perfectly with the Clinic foodservice team’s plant-forward/whole-foods philosophy.

“I’ve really tried hard to collide both my work and personal goals, both ending in creating a greater awareness around whole foods and helping our country take back their health through cooking and mindful choices,” he says.

Some folks couldn’t believe he was getting enough protein to be strong enough to compete, a common refrain heard by vegetarian and vegan athletes.

“I was eating a ton of nutritionally dense food, all of which was plant-based,” he says. “Everyone was concerned that I wouldn’t be getting enough protein within my new plant-based lifestyle, but as I discovered, I was getting plenty through a variety of different vegetables. You realize Popeye knew what he was doing, crushing cans of spinach that were 45 percent protein.”

Even Popeye might have a tough time with the physical rigors of this competition. Just a few activities Ingraham crushed include a training schedule of running 2.5 miles to the gym, lifting as much weight as possible, then running 2.5 miles back. Challenges on the show are “remarkable feats designed to test mind, body and heart,” according to NBC.

We won’t find out just yet who the winner of “The Titan Games” will be, but Ingraham is already a winner in getting the word out about healthcare foodservice and nutrition, using each media interview to get his point across.

“Preparing for interviews, I made sure to deliver on the message about being truly mindful about your food choices is tough,” Ingraham says. “As much as it looks as if this trip was all about me, in fact it’s about my journey and how I’m now living proof that when you commit to a better lifestyle through nutritionally dense food you can achieve better health. I want to help people develop a better relationship with food.”