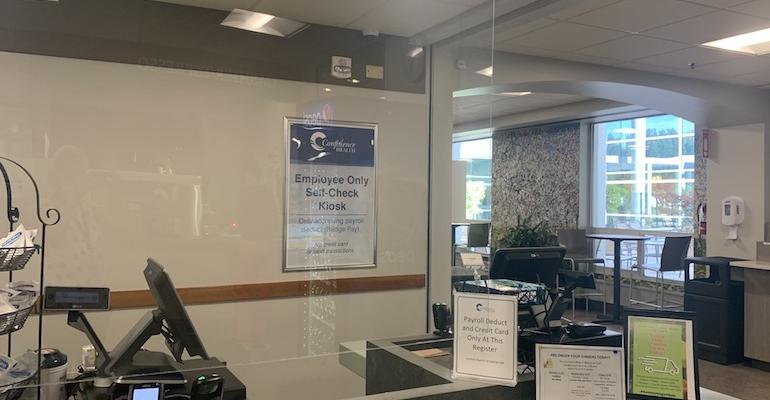 Confluence Health in Washington state has seen its share of COVID patients along with the restrictions the crisis demanded, and it has been adjusting with simplified menus, advance ordering and an impromptu grocery service.

Confluence Health, which operates two hospitals and a number of outpatient clinics across central Washington state, has felt the impact of the coronavirus crisis like just about every other healthcare facility in the country. The effects have included dealing with coronavirus-afflicted patients as well as with the restrictions the crisis forced, including dramatic reductions in in-patient counts, substantial numbers of staff working from home, the closure of outpatient clinics and the barring of most visitors, which reduced retail dining revenues by about 50%.

The health system operates the 206-bed Central Washington Hospital and the 20-bed Wenatchee Valley Hospital, both in Wenatchee, plus a number of outpatient clinics across the area. It has received a “handful” of COVID-positive patients, who were all isolated on one floor of Central Washington Hospital, says Michelle Harris, director of nutrition services for Confluence Health.

“We had about 15 that we were segregating to a single floor, but it never got to a point where we had a surge that would have made us implement our disaster plans,” she explains. As for meals for those patients, “we’ve never delivered to isolation patients prior to COVID,” so the procedure for serving them was basically already in place with nurses handling the actual meal delivery. The hospital offers room service meals from a select menu for patients capable of using it and a non-select menu on a seven-day cycle for the rest, but Harris says many of the COVID patients were on ventilators, where the biggest feeding challenge was finding tube feeding products early on, an issue that eventually was resolved. 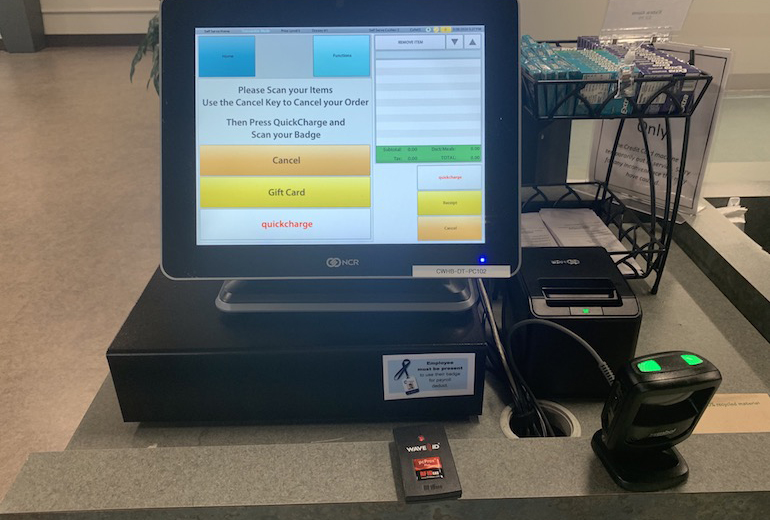 COVID patients have their meals delivered on carts that only stop on their floor. “We also try to have the same tray passer, if possible, to limit any kind of cross-contamination,” Harris adds. “We also used to have all kinds of condiments and coffee and things like that on top of our meal delivery carts, but we removed all that just to make it easier to clean in between every delivery.”

The food continues to be served with reusable dishware and cutlery, however. “We made the decision early on after doing research and looking at several listserves to keep using china,” Harris says. “Our dish washer goes to 180+ degrees so it kills any bacteria. We sanitize our carts quite frequently and we’re using proper PPE and hygiene practices, so we didn’t think we needed to make any changes.”

Prior to the COVID crisis, a cart would go around the hospital to collect soiled trays, dishes and flatware. Now, one dedicated cart collects only from the COVID floor and is cleaned and sanitized between every trip.

All associates are temperature tested before going to work and the cafeteria has been restricted to employees only, which now has a self-checkout register (items are bar coded to allow quick, easy scans) and where cash payment has been eliminated in favor of badge pay only.

Restrictions related to the COVID crisis have caused a severe drop in meal counts on both the patient and retail dining sides, “so we had to get creative with our menus and reduce services just to reduce waste,” Harris says. “We modified our patient tray line menu and cut the select patient menu by maybe 30% just to streamline the process because in-patient [counts] have been down at least 40%, so we didn’t want to prepare all the different foods just to have it go to waste.”

The patient menu items prioritized to be retained included not only the most popular items but also those with ingredients that could be cross-utilized as much as possible, Harris explains. She cites a stir-fry dish and a Southwest salad, both of which were decent sellers but used a lot of exclusive ingredients, as being eliminated. “Also, we had a pizza that took 25 minutes to make and we decided, we just can’t afford to keep doing this,” she adds.

Keepers included traditional-type items such as grill and deli selections, meatloaf and turkey and pork dinners.

Meanwhile, the retail operation eliminated the self-serve soup area (it’s now behind the hot line) and cut the two entrees, starches and vegetables offered each day to one of each. The self-serve salad and sandwich bars had already been eliminated a year and a half ago and hot entrees are now unavailable on weekends given the sparse counts, though the grill and deli remain open along with a selection of grab-and-go and ready-to-heat items.

The two biggest retail additions have been a grocery store and a home meal replacement-style family meal program.

“The grocery has been really popular and I don’t think it’s going to be something that we’ll take away once we get back to normal because it’s been such a nice option and service for our employees and something that’s really not that hard for us to execute,” Harris offers, noting that the product mix consists of items the department had already been purchasing. They include dry foods and non-foods (paper goods, etc.) as well as perishable goods, including some fresh produce, and even a few frozen items like chicken breast and a popular pork carnitas product. 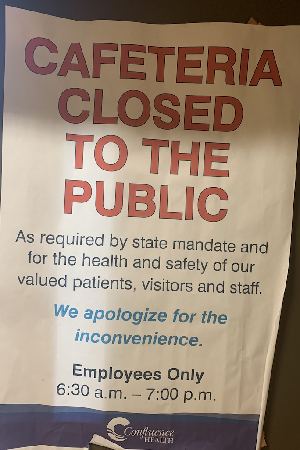 Photo: With retail dining closed to visitors and staff counts cut by remote work and the closure of out-patient clinics, revenues have been cut in half at Confluence Health.

The biggest challenge is that the products come in commercial size packs, with some such as 50-pound bags of rice or flour way too large for consumer sale, so these have to be broken down and repacked by staff. But for most other items, Harris says, the customers have to buy the oversize quantities—five-pound blocks of cheese, for example—the same as they would in a retail warehouse store such as Costco.

The orders, which require a 24-hour advance notice, are assembled by the staff and delivered to the customer car at a drive-thru.

Meanwhile, the take-home family meals are take-and-bake offerings designed to serve four to six people and are available Mondays, Wednesdays and Fridays. “It’s been a really popular thing for staff because they don’t have to worry about cooking,” Harris says.

The selections skew toward serving the staff demographics, which are heavily Hispanic, she explains, so they include items like chicken mole, enchiladas, chicken fajitas and a street taco kit, but there is also a stir-fry kit and lasagna. With the arrival of warmer weather, summery selections such as barbecue kits with hamburger or pulled barbecue pork and penne pasta with chicken Alfredo are being added. The kits include salads and other side dishes and generally sell for around $19.99 to keep it affordable while covering ingredient and labor costs.

“It’s not like we’re trying to make money off it, just trying to offer a service,” says Harris, noting the same strategy applies to the grocery items, which generally are priced at a modest 10% markup from their purchase cost.

Grocery items as well as the family meals and retail meals in the cafeteria can be mobile ordered from a phone or desktop computer through a system that was implemented in response to the COVID crisis. The system exclusively takes payroll deduction payment.

“It’s funny, there are things in foodservice you’re always wanting to do or asking for that becomes a 9- to 12-month project or never happens, and then it gets done in like two weeks with COVID,” Harris laughs regarding the sudden implementation of a system she’s wanted for some time.

The capability had been there since the implementation of a new Hayes Quickcharge POS system last November, “so we were able to essentially buy a new printer hooked up to our internet, get a website done and turn it on!”