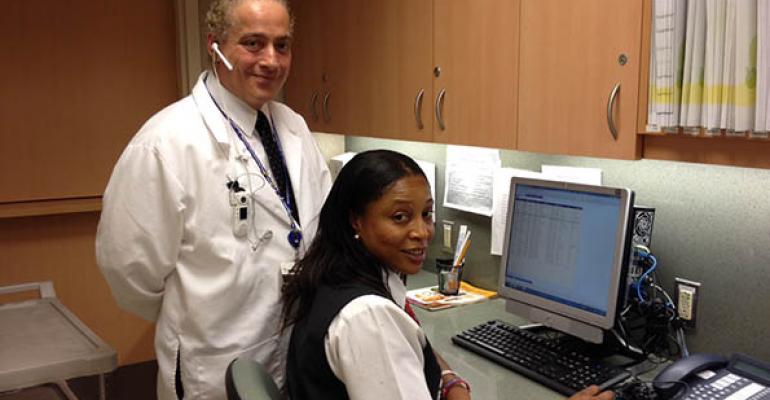 A Day in the Life with James Wu

James Wu has little time to waste. The native New Yorker talks fast and walks even quicker. Watch him at work and it’s easy to understand what a “New York minute” really is. Wu started at Sloan Kettering 14 years ago, just before the 450-room teaching hospital became one of the first in the country to institute room service. Since, meal satisfaction scores have ranged from the 97th to 99th percentile among similar hospitals and Wu works hard to maintain those numbers.

Here’s a peek inside his day:

Wu’s alarm goes off, but he’s been up since 3:30. His shift doesn’t start until 6, but “it’s insanity coming in at the same time as your employees,” he says. “I have to get set up first and I need that quiet time.” He’s usually out the door by 4:10.

4:40 am Wu arrives to work after a short subway ride. He walks the final four blocks from the stop at 68th St. and Lexington Ave.

5:00 am After opening up the call center and diet office, Wu gets to his office and starts preparing the day’s agenda for the 20 or so room-service associates (RSAs) working the 7-3 shift he oversees.

6:00 am Wu stops in the kitchen and meets with the four expediters who have just started their shift. “They pay attention to the accuracy of the items, make sure things are presented right and dispatch the carts in a timely manner,” he says.

7:00 am Wu meets with his RSAs in the conference room and goes over the agenda, which includes scores from Press Ganey and patient comments he reads through, both good and bad. “It’s like group therapy,” Wu says.

7:30 am For the next couple hours, Wu roams the kitchen to makes sure orders and the food are coming and going as they should. He stops in the call center, where three staffers are working the phones.

9:30 am He says the “fun part” of his day is meal rounds when he visits longer-stay patients and follows up on any complaints. “We try to never say no to any patients,” Wu says. But there are exceptions, like the 12-year-old boy who Wu briefly allowed to order three sodas with every meal. “A few days later, I was making meal rounds on pediatrics and to my amazement, there on his door was a sign that read, ‘Sodas $1.’”

11:30 am After a brief stop in his office, Wu heads back to the kitchen and checks the food on the cook station, sampling sauces and then at noon he makes sure the afternoon teacarts are set up properly. “Basically I’m being visible,” he says.

1:00 pm “Now I can breathe.” The evening crew (1-9) arrives and Wu gives a briefing to his afternoon replacement.

2:00 pm Wu’s shift should be winding down, but on this day he has the regular Wednesday managers’ meeting from 2-3:30 led by his boss, Director of Food and Nutrition Services Veronica McLymont. Today it’s Wu’s turn to lead the book club and he must present a report on Chapter 7—‘Harness the Motivating Power of Imagination’—from the book, If Disney Ran Your Hospital.

3:30 pm Wu calls it a day and heads for the subway. At home, he changes clothes, relaxes for a bit and does some laundry. He recently moved from the suburbs back into Manhattan and is still adjusting to apartment life.

5:00 pm He makes an omelet for dinner, using pieces of cheese he brought home from the spread at the manager’s meeting. “Because I had to give the report, I didn’t want to eat a lot right before,” admits Wu, who snuck some cheese home in his briefcase.

8:30 pm After catching up on the previous night’s prime-time TV he recorded, Wu heads for bed.