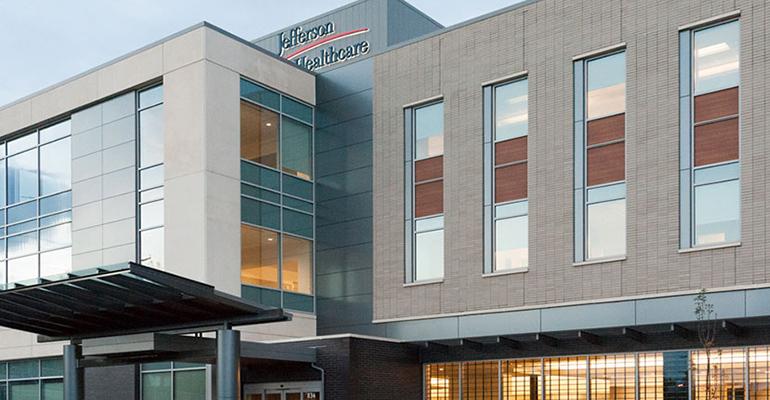 This winter, Jefferson Healthcare’s seasonal patient menu focused on housemade soups. Patients had a choice of three each day, such as chicken with lo mein noodles, beef chili or a cream-based clam chowder with smoked salmon, fennel and potatoes.

“Soup is the most effective way to deliver nutritious food to people,” says Arran Stark, executive chef and director of dietary services. Since ingredients co-mingle, patients don’t avoid certain elements of the meal. Plus, “it keeps its temperature, it’s never dry and it’s easily digestible for patients. And there’s something very comforting, psychologically, about it.”

To that point, the hospital serves soup in miniature ceramic tureens, to keep it hot and create a home-like experience. Stark curates the food experience, as he did when he trained as a culinary apprentice and cooked for upscale venues across the U.S. He moved to Port Townsend, Wash., from Oregon, after attending culinary school. He took the job at the hospital in 2013.

To make the switch to in-house cooking, Stark equipped the kitchen, adding burner tops, a grill, a tilt skillet, a hood system, and a new walk-in freezer and cooler. Then he trained the staff in knife and cooking skills. In 2013 the hospital renovated its 60-seat café. A patio seats another 15 to 18 guests.

The café is open for three meals and serves 180 hot entrées to hospital visitors and community members daily. Guests can also choose from a sandwich station, a salad bar and a variety of grab-and-go items. Employees have access to a 24-hour servery; they pay using the honor system.

Stark says the program has grown so quickly that they’re planning to build a new 120-seat dining room in the next five to seven years.

Upgrades in sourcing are just as dramatic as the improved facilities. Under Stark’s leadership, they now source 90 percent of their ingredients locally at the height of the harvest.

Since the hospital can’t give out loans, it can’t participate in a traditional CSA program. So Stark devised a produce voucher program, or “institutional CSA,” that allows the hospital to prepay for produce from a handful of local farms in exchange for a five percent return in goods. They also buy some end-of-day produce from market vendors and take seconds from local farms for a reduced rate, such as a round of scabby potatoes they bought and turned into mashed potatoes.

They buy chicken, beef and pork from local farms and salmon from an Alaska fisherman whose company delivers products by bicycle. They purchase yogurt from a regional producer. They buy shiitake and oyster mushrooms from a local farmer and chanterelles from local pickers. On occasion, they work local spot prawns into special meals for patients.

The Jefferson staff makes puddings from scratch and their own version of Jell-O out of collagen and strained organic juices. They preserve food, too, such as sodium-free chicken stock, which they freeze in individually portioned paper cups. They process basil into pesto and basil oil and freeze blueberries and strawberries. They pickle their own beets for the salad bar.

And they pay close attention to food waste, creating soups from extras. “We don’t believe in leftovers,” Stark says.

He chooses skeleton ingredients and shops the fresh sheets on Sundays. But hospital cooks create the daily menu.

They offer one entrée, a starch and a vegetable for lunch and another for dinner, such as grilled chicken chimichurri with chard and couscous or Baja-style fish tacos with rice, beans and citrus slaw. Sometimes they repeat meals the following day.

To encourage healthy eating, they do a food demonstration every other week in the cafe. Some employees pick up a CSA box from a local farm right at the hospital.

Stark also runs a to-go container buy-in program. Participants pay $6 for an Eco-Takeout reusable container and fill it from the café. The staff washes and sanitizes returned containers for re-use. It gives people a to-go option while driving down the hospital’s paper goods costs. The popularity of the program has even sparked an idea: a drive-through window.

Stark is full of such ideas, driven by the desire to bring people together around food.

“We want to be the hearth of the community. Our purpose isn’t to make money as much as to offer nutritious meals to our community at a fair price. At least that’s how I think about it.”