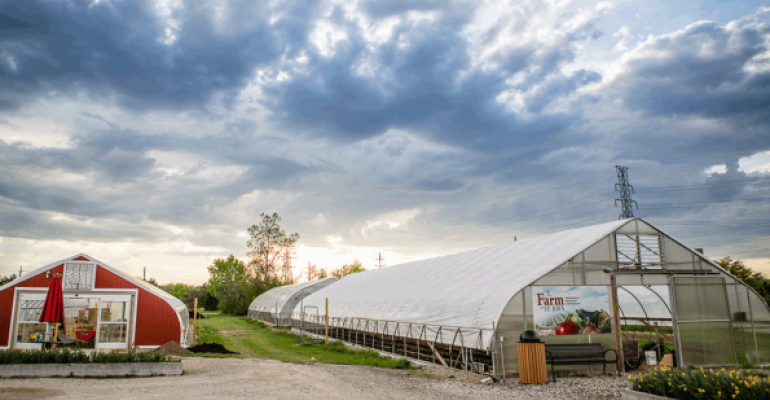 The Farm at St. Joseph Mercy Hospital in Ann Arbor not only produces some fresh, organic produce for the dining operation but it serves educational and promotional purposes as well.

The 25-acre area on the grounds of St. Joseph Mercy Hospital in Ann Arbor, Mich., used to be covered with grass that had to be mowed, watered and fertilized but otherwise, literally, just took up space. Today, it is a farm producing a variety of fruits and vegetables both for use in the hospital kitchens and for retail sale.

Aside from the crops, the farm also produces plenty of goodwill in the community and among patients, visitors and hospital staff, and provides St. Joe's Mercy with a dramatic setting for advocacy and education. It even assists the clinical mission by serving as a vehicle for therapy activities, including for victims of brain injuries.

The core of the Farm at St. Joe's is a group of three hoop houses that produce crops all year-round, even in the dead of winter, plus an adjacent quarter-acre outdoor plot that includes a staff community garden.

Most of the rest of the acreage is covered by a hay field planted with alfalfa and overseen by an outside farmer, which is certainly both more useful and more environmentally friendly than the grass lawn it had replaced.

The hoop houses and outdoor garden produce about 3,000 pounds of fruits, vegetables and herbs annually. Some of this bounty winds up on patient meal trays and on retail dining menus, while some is sold at the institution's weekly farmers' market, through its in-house CSA (Community Supported Agriculture) program, in its retail stores and even at a local grocery. Anything left over is donated. 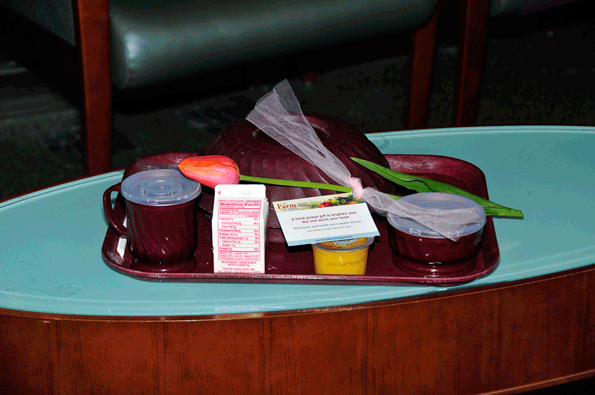 There is no pretense that the onsite cultivation can supply more than a minute portion of the hospital kitchen’s requirements, but it does make a significant psychological impact where it does appear. Café signage, retail pack labels and tray cards bearing the Farm at St. Joe's logo spread the word that this hospital has a very tangible symbol of its commitment to sustainability and local sourcing right on the grounds.

The farm is a nexus for both the hospital and community activities as patients and staff from St. Joe's Mercy are invited to come and use the space as a place to relax or unwind.

Meanwhile, in the past year, about a thousand students from the nearby Ypsilanti School District visited the farm thanks to a program funded by a Ford Foundation grant that brings all fifth-graders from the district to the farm for tours and educational sessions.

There is also a preschool curriculum and "we have become a very popular site with the special needs groups in town," says Amanda Sweetman, who oversees the farm operations as full-time project manager. "We have a handicapped accessible hoop house with all raised beds so it's a great teaching tool for kids of all abilities but particularly the special needs groups."

The handicapped accessible hoop house is the only one of its kind in the country, Sweetman notes, and was built in partnership with the Eisenhower Center, a local traumatic brain injury recovery group, which sends its clients to the hoop house three to five days a week for vocational, recreational, occupational and physical therapy sessions.

Also using the farm facilities are dietetic interns learning about the nutritional value of local and organic produce. 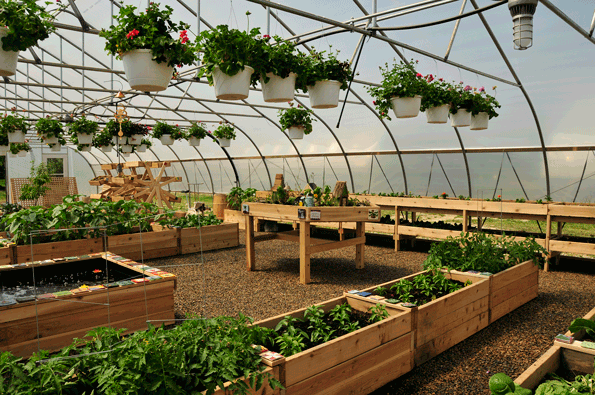 Raised beds allow handicapped access in one of the three hoop houses, the only facility of its kind in the country. Photo: Saint Joseph Mercy Health System

"We work with those students to give them a real understanding of where food comes from," Sweetman says. "Many of the dietitians have never gardened [and] don't know the difference between store bought and home grown. This year I had seven different interns and not a one of them knew that a red pepper is just a ripe green pepper. So they get a chance to work on the farm, to know what goes into growing food."

The interns do some of the work on the farm as part of their education, with much of the rest done by volunteers from both the hospital and the community. In the last fiscal year, the farm absorbed about 1,700 volunteer hours. Sweetman is the only full-time employee of the farm and a lot of her time goes to administration and promotional duties.

With so much amateur help, Sweetman has to be careful about what to plant. "We want things that are relatively straightforward to harvest [and] care for and don’t require advanced farm skills," she says.

Among Sweetman's duties is working with the hospital culinary staff and foodservice administrators on how to best leverage the farm's production.

For example, she notes, the catering staff is planning to make more of their salad dressings in house, so she is supporting that by planting more garlic.

One of the farm's most popular products is cherry tomatoes, which appear on both patient and retail menus and are also sold in grab-and-go packs at the retail sites.

Hoop houses are not artificially heated, so a Michigan winter can be challenging, but the production doesn't stop even when temperatures drop.

"Right now we’re preparing for winter, so we have spinach planted and a lot of salad-type greens and kale and radishes," Sweetman says. "That will go all winter long because those things can handle being frozen. Then on days when it’s sunny and warm and everything thaws out, I can harvest."

In the summer the hoop houses come in handy for accelerated growth of crops for which Michigan has a short growing season, such as bell pepper.

“It’s really hard to get a red bell pepper if you grow them outside here,” Sweetman observes. “[Often] it’s almost September by the time you get them so I start them in the heated greenhouse and then I move them into the hoop house in early May so I start getting red peppers by end of July to middle of August.”

The farm complex also includes half a dozen beehives, run in partnership with the local Honey Project, which takes care of tending the hives.

"I support them by planting crops for them," Sweetman says. "Right now we have red clover blooming as late forage is really important for bees. We also have a native plant pollinator garden here."

The entire St. Joe's Mercy complex is a certified by the Wildlife Federation as a wildlife habitat, Sweetman notes proudly.

In addition to using its products in house, the Farm at St. Joe's also sells some of its production at the weekly farmers’ market held on the hospital grounds and through the recently started CSA in which hospital staff can contract for baskets of fresh produce to take home. Unlike traditional CSAs, which require a specific pickup time, the CSA at St. Joe’s is "self-serve," meaning that the produce is bagged and tagged for each member, then placed in a designated cooler for pickup over a span of several days to accommodate the erratic schedules of the members. 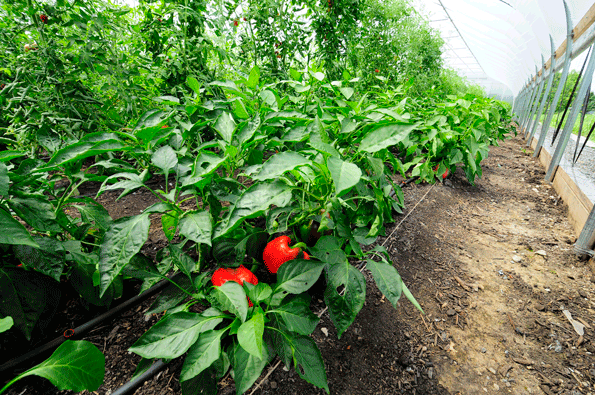 Red bell peppers are among the crops grown in the hoop houses, where they mature faster than in traditional outdoor fields. Photo: Saint Joseph Mercy Health System

The Farm at St. Joe's crops are also sold at a nearby store called the Argus Farm Stop, a seven-days-a-week retail market where local farmers sell their products. This outlet is largely symbolic and has to walk a fine line, Sweetman explains.

The farm's role in promoting healthy eating also manifests in other ways. For example, it recently participated in a tailgate party for a University of Michigan football game, with one of the products it offered at the event being a kale salad. The salad was so popular that it prompted a rush of people from the tailgate event to the hospital farmers' market, also being held that day nearby, to buy kale.