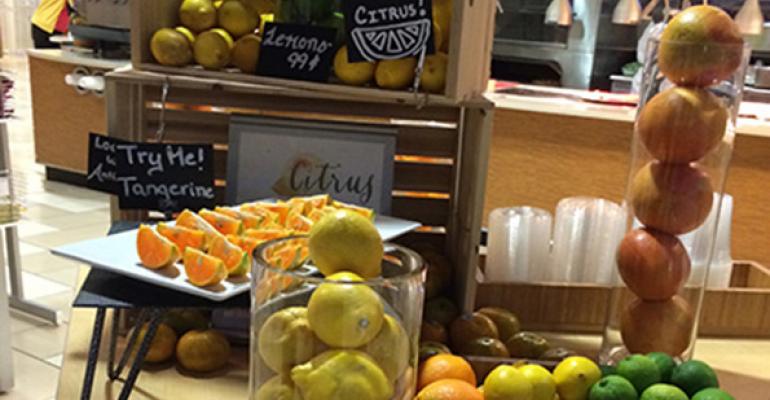 GALLERY: A Look at the Food of Scottish Rite at Children&rsquo;s Healthcare of Atlanta &gt;&gt;

Food is a huge part of the process of getting healthier at any hospital. That’s something the foodservice team, which is managed by Morrison Healthcare, at Scottish Rite at Children’s Healthcare of Atlanta, is acutely focused on.

While the medical teams have their chief residents, the foodservice team has Bradley Czajka, the executive chef.

Czajka started cooking in the Air Force and has also worked in upscale hotel kitchens. He says one-on-one interaction with staff is critical in getting everyone to try healthier options.

“You’ve got to have that interaction,” he says, and many of the stations feature cook-to-order action happening for each customer. At the Flavors 450 station, the chef prepares such items as a creamy chicken and pasta dish to order that taste decadent, but aren’t at all. The idea behind Flavors 450 is that each entrée is less than 450 calories, while being a satisfying portion. It’s one of Morrison’s signature tactics.

This concept and others in the café (see our gallery for a look inside the retail café and the room service line) are supported by employees who “walk the walk.” For the past few years, hospital employees have been the starting point for wellness at Scottish Rite.

Linda Matzigkeit, chief administrative officer, Children’s Healthcare of Atlanta (the parent company of Scottish Rite), initiated the Strong 4 Life effort in 2008. She says the aim has been “getting employees healthy so they can be there for the kids.”

“We developed [the program] to make it easy for employees to make healthy choices,” Matzigkeit says.

That’s included offering healthier grab-and-go items for hospital workers who don’t have time to sit down for lunch and also employee rewards programs. Wellness ambassadors roam the hospital and when they catch an employee doing something healthy, they reward him/her with a sticker, which can be used as a chance to win prizes (like a FitBit). When an employee orders 10 healthy items, the next one is free.

“We’re moving away from using food as a celebration or to pacify. As in, ‘I’ve had a rough day, let’s have junk food,’” Matzigkeit says. “The Strong4Life program has become part of the culture.”

Last year 79 percent of the hospital system’s 9,100 employees met three of four Strong 4 Life goals (BMI, blood pressure, cholesterol and blood glucose). That’s up from 77 percent in 2012. In addition, employees have lost more than 65,000 pounds since the program began.

Employees who are enthusiastic and knowledgeable about healthy eating are poised to offer a better dining experience for patients, their parents and the hospital staff who care for them.

The room service line prepares kid-friendly items that patients (usually their parents) can order by phone for real-time meal service. On average, the food is ready within half an hour, 45 minutes at the longest. The room-service menu is made up of items that kids like, too: quesadillas, sliders, soups, pasta and more. The staff working the line says they are proud to make the food taste great without a lot of salt and fat, and often tailored for special diets. The staff also works with patients individually.

“We want to get them something that they will want to eat, that’s appealing to them,” says Laura Hays, patient services manager. “Recently, there was a 13-month old here, and the only thing that was appealing to him was mango. So we made mango smoothies.”

A recent survey of hospital CEOs revealed that patient satisfaction is one of the top three areas of focus, and Scottish Rite has been working steadily to rise to that challenge.

Patients who are well enough to come down to the cafe are encouraged to do so, and the littler ones ride in red wagons to get there. Parents, who are able to stay in the rooms with their children, often eat every meal at the hospital for long periods of time, so the menu must appeal to them, too, says Kevin Dorr, vice president of retail, Morrison. Dorr is charged with making the retail experience current and exciting for caregivers, visitors and guests. This includes keeping up-to-date on food trends and working with the kitchen staff to offer appealing choices throughout the café, like banh mi sandwiches, an upscale salad bar, agua fresca with seasonal fruit and a big selection of grab-and-go items.

The different components all contribute to the hospital’s work at making both employees and customers happy and healthy.