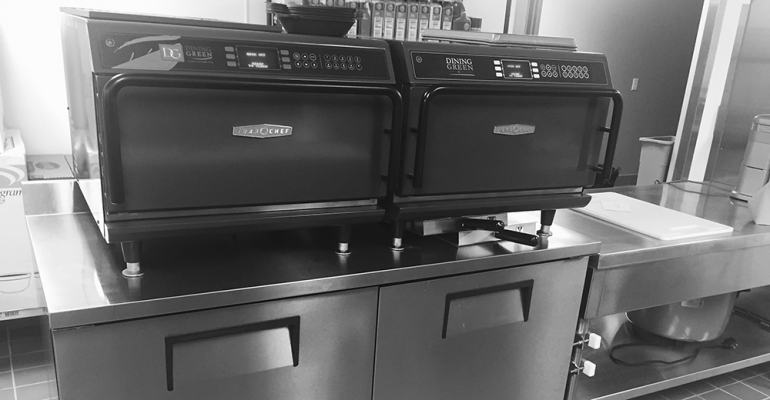 Contract foodservice firm Food Management Group (FMG), an FM Top 50 company that operates in the healthcare market, has been successful at expanding its operational flexibility and client base through a program called Green Kitchens. The program has allowed FMG to make successful inroads into smaller specialty hospitals focused on physical, drug or alcohol rehabilitation that traditionally had difficulty maintaining in-house foodservice operations due to space and infrastructure limitations.

The Green Kitchen program allows FMG to install kitchens in spaces that are smaller than normal and that lack traditional kitchen utility hookups other than drains and water access, all at a lower implementation cost. When operational, the Green Kitchens also require less labor than traditional production kitchens while producing generally healthier dishes.

“We call it a ‘green kitchen’ because it’s ventless and greaseless,” explains T. David Witten, FMG’s president and chairman. “We don’t need any air vents to remove anything from the kitchen. We use a [Middleby] TurboChef oven designed by [FMG Executive Chef] Andy Revella and TurboChef about 10 years ago,” supplemented by small induction stoves to prepare things like soups and gravies, and ventless dish machines for warewashing. FMG uses Goslyn grease recovery devices to avoid the need for traditional grease traps in floors.

“Because we don’t need ventilation, it’s a greaseless kitchen,” Witten adds, “but we can still make french fries, fried chicken and [other fried items] with the same product quality as operations that use a deep-fat fryer.”

The Green Kitchen program originated earlier this decade with a client that had no in-house kitchen and so had to bring in food from outside sources. It asked FMG to help develop a workable in-house solution, and that became the first Green Kitchen.

“We were able to take an area in the hospital that was basically a storeroom and convert it into a kitchen, without the need for major renovations and related expenses,” Witten recalls. “The cost of developing one of these kitchens is about 25 percent of what the cost of developing a major kitchen would be. We literally can do a turnkey for about $60,000 on everything.”

Currently, Green Kitchens are in place in 45 buildings, per Witten, with seven additional ones on the agenda. The target market is “buildings that have been catering food in but are not getting quality because of long delivery times and [other factors]. We can convert that bring-in or take-in concept to a cook-in concept. It brings a traditional type of service to a smaller area that didn’t have that capability prior to us getting there.”

Witten adds that of the 45 buildings where Green Kitchens now operate, 10 didn’t even have a kitchen previously. “We’ve taken 600 to 700 square feet and put in a Green Kitchen that can serve 50 to 70 people three times a day without any problems with three to four FTEs at a max where a normal kitchen of any size takes five or six.”

The platform is also scalable so that it can accommodate larger populations if needed. Witten says the target market is facilities with 150 or fewer beds, which has traditionally been difficult to serve viably for contract companies.

“[Clients have] found the Green Kitchen concept to be exactly what they need,” he offers. “The beauty of the [concept],” he adds, “is that we are able to cook the food in such a manner as to be able to reduce our staffing needs and that we can pre-prep everything 20-30-40 minutes before service and literally cook everything in that timeframe so that the food is already hot and serviceable right out of the oven. So we have minimal hold time, which increases the quality and the amount of [nutrients] in the vegetables that we serve.”