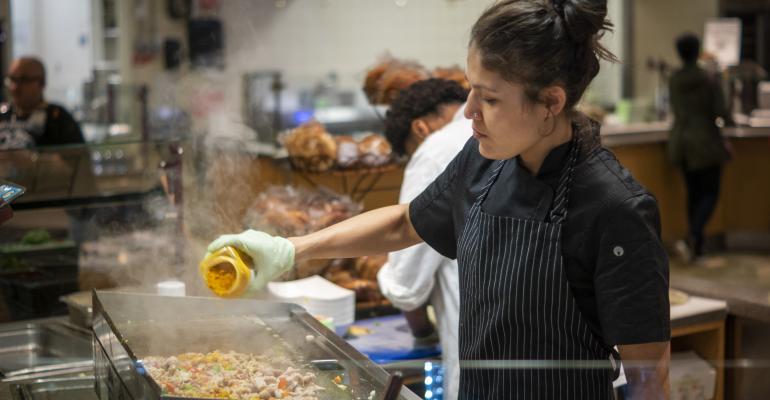 Stony Brook University Hospital’s Market Place Café plays host to a series of guest chefs, welcoming lots of new flavors into the environment. It’s been a great way “to add more variety to our menus and offer guests cuisines from around the world…and partner with the local culinary community,” says Michael D. West, director of dining at Stony Brook University Hospital.

A couple of times each month, the café opens its doors—and kitchen—to guest chefs who set up shop for the day. The chef uses the main kitchen to prep and precook, then prepares made-to-order guest meals at the action station in the center of the dining area.

“We’ve had guest chefs from local restaurants and food purveyors offer different cuisines such as Mediterranean, Caribbean, vegetarian and vegan, gluten-free and grass-fed beef to name a few,” West says. “This helps us collect feedback on potential new menu items.” 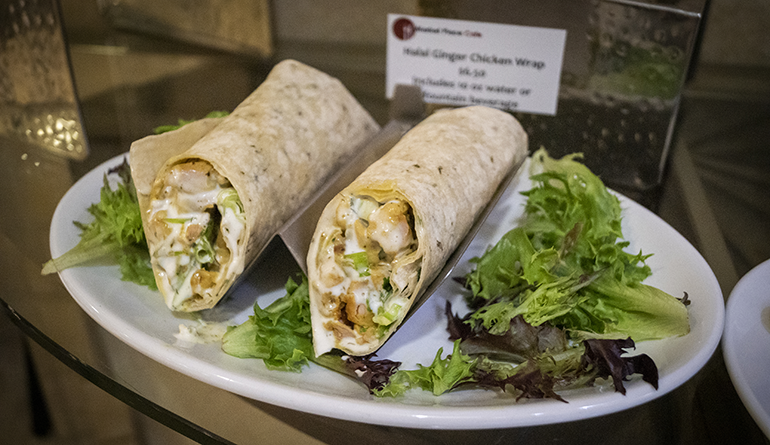 Halal ginger chicken wraps were the star of this recent Guest Chef series.

Last summer, one of guest chefs was Zahra Mirzai, who owns and operates Choopan Grill of Selden, an Afghan restaurant on Long Island. Afghan food is a fascinating tapestry of elements different regions, from Persia to India to the Mediterranean and China. It’s a kebab and kofta-heavy cuisine, with lots of rich, slow-simmered stews brimming with deep flavor. Grains and veggies play a big role, too, as does dairy products like yogurt, often used as a topping and in dogh, a refreshing yogurt drink. One interesting dish is a traditional Afghan eggs, a slow-simmered dish of eggs in tomatoes, onions and potatoes, similar to shakshuka. See it made here.

“The foods, tastes and spices of Afghan food are a rather tasteful blend of the regions that surround Afghanistan,” writes Christi Qazi, a chronicler of Afghan culture. “Unlike food from its neighbors to the east, the spices used in Afghan dishes are neither too hot nor too pungent, and in contrast to its western neighbors, Afghan food is not bland. In fact, many western travelers find the foods of Afghanistan a perfect blend of exoticness and good taste.”

At her restaurant, Mirzai offers authentic Afghan kebobs, vegetarian dishes, sandwiches and more for lunch and dinner. Some “don’t see this every day” menu items include vegetarian dishes like bamiya (fried okra), lubiya (red kidney beans) and kadu (pumpkin) simmered in tomato and onion gravy. Chicken and beef kofta rolls along with falafel are wrapped in fresh pillowy naan.

For the Guest Chef event, Mirzai told the audience she comes from a long line of Afghan restaurateurs who are found all around the U.S., Canada and Europe. Her mother, who now owns a Manhattan restaurant, started out with a food cart, serving mainly the dish Mirzai brought to University Hospital: halal ginger chicken naan wraps.

“They’re marinated at least 48 hours in advance,” Mirzai says. “And when we grill it, it is just tender and juicy and everyone seems to love it; it just melts in your mouth.”