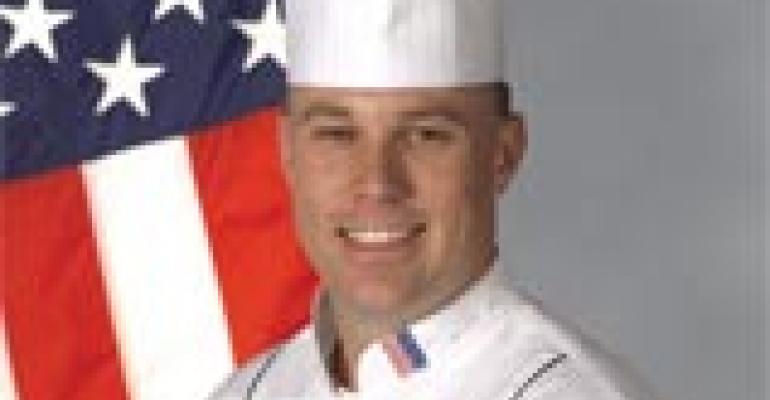 When it comes to honing culinary talent, the military is usually not what first leaps to mind. But don't tell that to Scott Graves. Graves served five years in the U.S. Army, where he was an award-winning chef — in fact, he is the first to win back-to-back All Army Junior and Senior Chef of the Year titles in the 27-year history of the competition. He even got to prepare one of his dishes on the Today Show.

Today, Graves serves in another sometimes-overlooked corner of the culinary universe — in healthcare. He is the newly hired executive chef at St. Elizabeth Community Hospital in Red Bluff, CA, where he is in the process of upgrading both patient and retail dining.

Graves found his calling when he took an elective Regional Occupational Program course during his senior year of high school for what he figured would be easy credits. Instead, he found himself working in hotel and fine dining kitchens — and loving it.

Upon graduation, he completed the ACF's three-year apprenticeship program and became a certified chef. With a young family to support, he decided to pursue a childhood ambition and enroll in the military, pitching himself as a certified culinarian. He spent the next five years in Europe, teaching cooking skills to soldiers, cooking for top brass and entering — and often winning — culinary competitions.

Upon discharge, he went to work first in the commercial world in the club/resort industry and then in hospital foodservice while going to school to earn DMA's Dietary Manager and Food Protection Manager certifications. He was hired by St. Elizabeth in early May.

“I fell into cooking in high school kind of by chance. I had all my credits finished by the time I got to my senior year. My counselor told me he still had to legally keep keep me in class for three hours a day, so he suggested I take this foodservice course because it would be a pretty easy A that would raise my GPA for graduation.

I thought it was some kind of home ec course but it turned out to be an actual career program. I would go to class on Mondays to do testing and paperwork, but the rest of the week I worked at a mom-and-pop restaurant two days, and in a hotel the other two days.

I had no interest in cooking to that point. I was into photography — I was the yearbook photographer all four years of high school — but the f&b director at the hotel told me, ‘Everybody likes to have their picture taken, but they can't always afford it. But everybody's got to eat no matter how much money they have.’ I've always remembered that.

Military foodservice isn't anything like the stereotype, that you just open a package, apply heat and serve. In fact, 95% of the food served in military dining facilities around the world is made from scratch. Food service soldiers go through lots of training in all areas of the kitchen from baking bread and cakes to management skills.

I was pretty successful in military culinary competitions because I had already competed as a civilian. The chef I apprenticed under was a member of the California Culinary Olympic Team and I was an apprentice on that team. I also tried out and got on the 2000 team, but then joined the military, so I made that team instead.

The Today Show was an amazing experience. We went through a few hours of training about how to present ourselves on live TV. Then, during the morning of the show we worked to make a few of the dishes we were going to present in Luxembourg during the Culinary World Cup. The dish I presented was a Warm White Chocolate Bread Pudding infused with a fresh raspberry coulis and accompanied by caramel and vanilla bean sauces and mini bananas.

Hobbies: camping and fishing with the family

Most Memorable Restaurant: Mercato in Heidelberg, Germany — ” They had an amazing Filet Carpaccio even my young daughters enjoyed eating.”