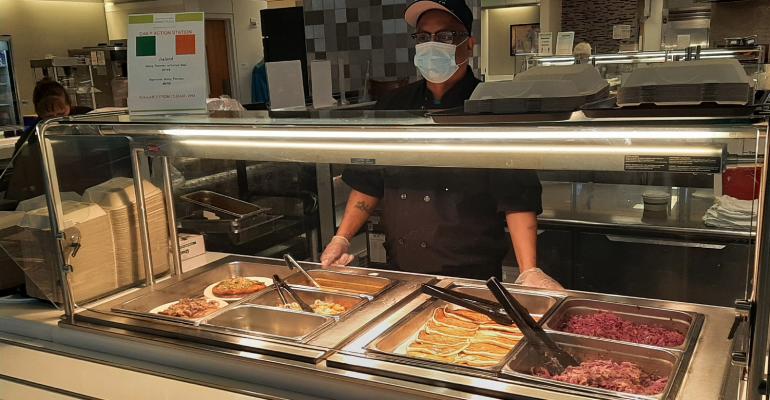 Eskenazi Health system lets diners travel around the world, culinarily speaking, with a menu program that is offering 52 cuisines in 52 weeks.

With travel being limited or restricted due to the COVID-19 pandemic, Eskenazi Health Food & Nutrition Services in Indiana is bringing worldwide cuisine to staff and visitors through a program called Passport Menu, which launched the first week of January. Under the initiative, the dining program plans to offer 52 cuisines in the 52 weeks of the year, with several dozen dishes menued each week corresponding to that week’s cuisine focus. See some of the global-inspired dishes in this gallery.

The weekly specials, including new plant-based entrees, are served in the Café Soleil and Ingram Micro Mobility Marketplace retail dining locations with the menus curated through a collaboration between chefs Dugan Wetzel and Tony Gargano.

Related: 9 examples of the Eskenazi Passport Menu of global flavors

The same Passport Menu specials are offered all week at the pizza, deli, grill and salad stations while the action station “has been the biggest hit because it features new items each day during the week from our Passport Menu,” says Tom Thaman, Eskenazi’s director of food & nutrition. “While the menu has created some logistical challenges, and really pushed our culinary creativity, the feedback from our customers and staff has been extremely positive and prompted our team to continue to work towards rolling daily specials out on the Chef’s Station featuring additional entrées and sides from these themes.”

“As it was for everyone, 2020 was a rough year for me, in particular because I like to travel, and I wasn’t able to,” he says. “As you might imagine, for me the best part of traveling is experiencing the local cuisine [and] for this reason in particular I am excited to see the creativity and work from the team on this program. It has been exciting to see where we are ‘traveling to’ each week.”

The Passport Menu has been timely not just as a respite from the pandemic’s effects but also as part of a needed menu refresh and as a fortuitous alignment with broader organization goals.

“We were going to redo our retail menus anyway,” Thaman notes, “but last year was a rough year for everybody—obviously—as people couldn’t travel, and that initially was our goal, but it also had an interesting side benefit because one of the goals the organization is really pursuing is to increase awareness of diversity, equity and inclusion. So we felt that not only are we doing this well, but we’re also able to get our staff and customers to better appreciate different cultures and cuisines.”

He says finding suitable dishes to work into stations like the pizza and deli is sometimes a challenge but one the team embraces. In Café Soleil, which is a full-service restaurant, a Passport Menu option is available each day from the kitchen.

“So, every week, we’re coming up with 25 to 30 recipes throughout the organization that are different from what most people are accustomed to eating here, but as Tom said, it gives people exposure to different cuisines, especially now that people can’t travel anywhere to get that exposure,” Wetzel offers.

The Passport Menu offerings currently are only available at the retail locations, though Wetzel says “they could certainly be something that could be incorporated into patient menus, but right now we’re just trying to get our feet wet with it to see exactly how big a project it is going to be.”

The week Food Management spoke with Thaman and Wetzel, the Passport Menu focus was on the Yucatan region in Mexico, so “a lot of ceviches, a lot of tamales,” he notes. The week of St. Patrick’s Day in March featured Irish cuisine while Mardi Gras week had Cajun Creole and the first week of April will be French because Wetzel discovered in his research that the French have a traditional seafood-based celebration around April Fool’s Day.

The initial menu back in January was Jamaica, featuring jerk spiced dishes and a lot of bright, fresh citrusy fruits. It was followed by Thailand with its curries, bowls, stir-fries and rice dishes. When the program visited China, it focused on a single region—Mandarin—rather than the entire country. “We’ll go back to China at some point,” Wetzel says, “and do maybe Szechuan rather than an all-encompassing thing all at once because China has so many different areas and types of cuisines, so we want to highlight each one as best we can that week.”

Each week’s menu is accompanied in the organizational newsletter with a discussion of the culture and cuisine.

“It’s also a learning experience for us,” Thaman adds, “because as you’re researching you find things that make you go, ‘Wow, I didn’t know that!’ and we then try to pass those along.”

Wetzel says the recipes come from research, from his extensive collection of cookbooks, from past travel experiences and from his diverse group of friends, colleagues and staff.

Sourcing ingredients hasn’t been a particular problem to date as local vendors are able to get what is needed. The one adjustment he might make, Wetzel says, is to substitute some healthier items in some traditional recipes as the organization is trying to promote a healthier lifestyle, but as traditional cuisines already tend to have healthier profiles with more fresh ingredients than standard American fare, this isn’t often an issue.

While COVID restrictions continue to affect retail business, Thaman does note that since the beginning of 2021, “we’ve actually increased our sales and our volumes and we will be opening up to outside visitors in our retail areas in the coming weeks.” He says daily sales counts are creeping up day after day and may be boosted with a planned implementation of a remote order/takeout option based on the GrubHub app later this year.

What’s on the menu:

Here’s an example of the kind of a Passport Menu dishes offered at the different food stations in the Eskenazi Ingram Micro Mobility Marketplace multi-station dining venue. The theme was Mandarin Chinese for this particular week: 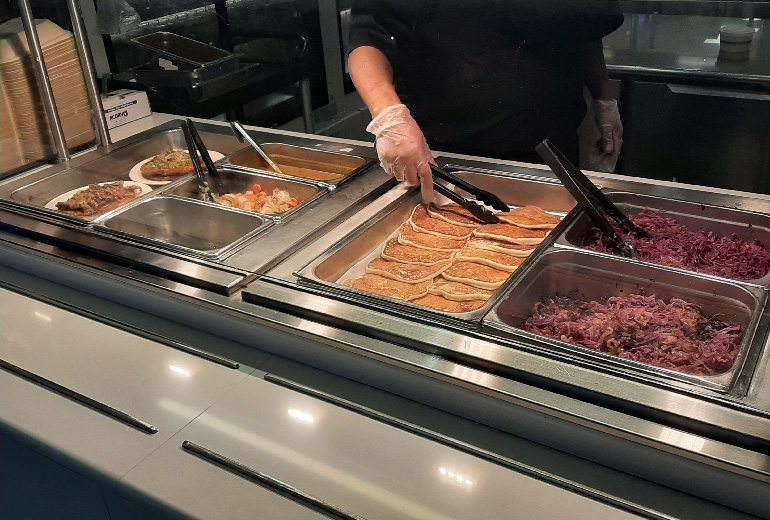 The action station offers a different special drawn from the week’s Passport Menu focus each day of the week.

1. Sweet and sour shrimp or tofu with rice noodles

2. Mu shu pork (vegetarian option is available in the recipe)

The special for the week in the Café Soleil sit-down restaurant was Peking duck with Mandarin pancakes.