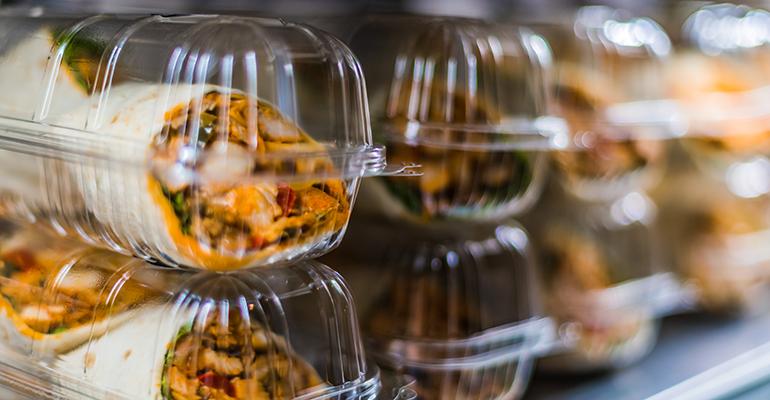 As schools, business and restaurants shut down in March, UCLA Health still had to provide foodservice for their staff, yet under a whole new set of coronavirus precautions. “Right away we eliminated everything that was self-serve,” Patricia Oliver, UCLA Health’s director of nutrition services, says of dining locations at Ronald Reagan UCLA Medical Center and UCLA Health - Santa Monica Medical Center. “Previously the soups and the hot cereal were self-serve, so we started pre-portioning all of that and setting them out with labels. We also changed to wrapped pastries and hot dogs for more grab and go.”

In one cafeteria, the very long salad bar was transformed into a makeshift mini mart that provided essential items that may have been in short supply on store shelves. “We started out just with produce, but we ended up with eggs, milk, pasta, beans, rice, sugar, flour, yeast, hand sanitizer, toilet paper and paper towels,” says Oliver. “We also offered prepackaged salads as well as prepackaged boiled eggs, chicken salad and tuna salad.” On Mondays and Fridays, they now also offer a toss-to-order salad station.

Both centers’ cafeterias include six meal stations including a grill, pizza, hot entree, exhibition cooking, deli bar, and soup and salad bar – now all transitioned to prepackaged or served by staff. “We also put Plexiglas barriers at the cashier stations and placed social-distancing stickers on the floors at both the cashier stations and in all of the different areas in the servery,” says Oliver. There are also supervisors out on the floor reminding people to keep social distance as indicated by the floor decals. 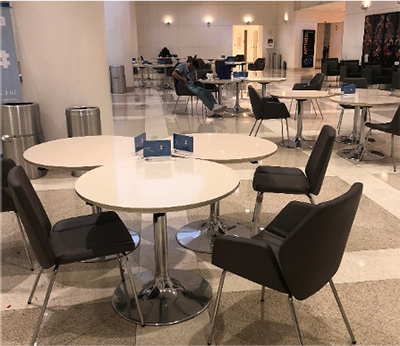 Photo: “We're currently working with Grubhub on allocating an app so that people can preorder their food and pick it up from a waiting station,” Oliver says.

Some of the indoor seating was also removed to ensure social distancing, but Oliver notes that 90% of the meals are taken to go. in the outside patio, tabletop signage reminds guest to limit to one person per table.

Supply chain shortages, particularly in those spring months, was a major challenge. “Sometimes either the product would not be delivered or a substitute that was not appropriate for our patient population would arrive instead. We have very complex patients here -- bone marrow transplant patients, liver transplant patients -- with complex dietary needs,” Oliver says. “We created a system in which our purchasing team sends an email to all the clinical staff every morning with the status of which items did or did not come in. Then we have a spreadsheet that lists items’ status and nutritional information so that a specific dietitian can say, for example, ‘Hey, this apple juice with fiber isn't a good product for my patient population.’”

They also canceled all special events. “Our bread pudding is wildly popular here, and we only serve it once every four months, because it takes a whole week for three cooks to make,” she says. “We typically have to make over 100 pans and people are lined up at 11 o'clock when we open to buy literally pans of it. Anything that attracts a crowd we have just canceled.”

Likewise, when catering just came to a screeching halt, Oliver said catering staff transitioned to becoming screeners at the hospitals to ensure staff temperatures were taken and health surveys filled out. 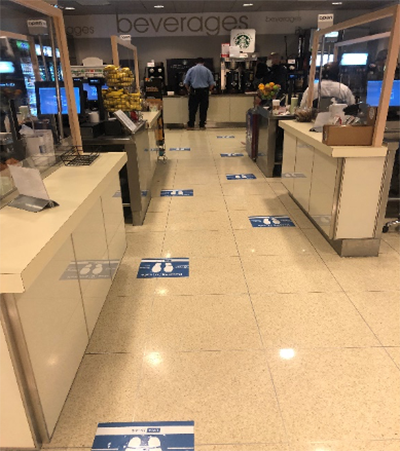 Photo: One of their sustainability efforts – a mug refill program – was also eliminated to prevent high-touch situations at dispensers.

Another major change was how taking precautions to limit COVID-19 risk impacted the dining program’s sustainability efforts. They moved from self-serve bulk condiments to individually wrapped packages of both condiments and cutlery. “We have won a lot of awards for our sustainability programs, and we were very close to becoming a zero-waste dining facility before this,” she says. “This took us back a step because, of course, safety and sanitation take priority over that.”

Up on the patient floors were staff was serving COVID-19 patients, the team transitioned to batch delivery times to limit how often the team had to replace personal protective equipment (PPE). “I feel really proud of my employees. Change is not easy, but everybody really stepped up to the plate,” she says. “That first month was a scary time, and I was very worried about having a lot of people call out and that just didn't happen.”

“Everybody at UCLA was very supportive. Anything that I needed in terms of PPE, hand sanitizers or equipment for my department, I got right away because we had a command center in place,” she says. “UCLA handled it really well, right from the beginning.”