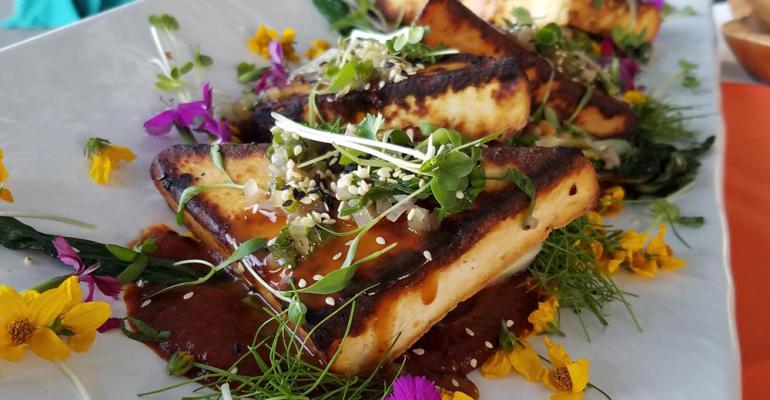 Palomar Health, a public health district with three San Diego-area hospitals serving 12 communities, has made a formal commitment to plant-based eating with a major shift in the ratio of plants to meat on both patient and retail menus.

The idea took root for the foodservice operation at Palomar with the adoption of Meatless Monday a few years ago. A few veggie-centric cooking classes with pros from the Humane Society of the United States (HSUS) came later, as did a Wellness Wednesdays promotion.

Momentum has picked up recently as hospital CEO Bob Hemker announced that Palomar Health would take things a step further, with an eye to prevention-based measures and food as medicine. “Everyone can see the link of those illnesses to food,” says Jim Metzger, CHA, director of hospitality at Palomar Health. “And in Northern San Diego County, we know that the community we serve has a much higher propensity to suffer and ultimately die from these four diseases. And our employees reflect that snapshot, too; they suffer from the same problems. In healthcare foodservice, it’s our obligation to be a moral compass.”

In the statement, Hemker adds, “healthy eating is the foundation of vitality…our cuisine is an extension of our mission—which is to heal, comfort and promote health in the community we serve.”

Now, Palomar Health’s foodservice team is bringing the plan from thoughts on paper to delicious food on the plate with plant-based food overtaking traditional center-of-the-plate meat in 60 percent of the menus.

“A lot of people are ready for this; they know there are foods that are healthy for them that can be working better for them,” Vasaeli says. “The cooking demos we do are sold out. There’s a need in the community, because people have forgotten how to cook.”

Vasaeli’s background in corporate wellness initiatives has led her to identify three major points that can lead to success in this setting.

“One is awareness,” she says. “Let people know what you’re doing and the changes you’ll be making and they’ll feel more comfortable. Second is education. Provide fun information on the health benefits of plant-based food. And third, make it engaging. Give free samples out. People may think, ‘This sounds a little weird,’ but then they try it and say, ‘Wow, that tastes pretty good.’ Those three things make it easier.”

Meatless Monday and Wellness Wednesday have been a great ways to ease into plant-based eating. Also, when catering opportunities arise, that’s another time to gently push plant-based cuisine.

“When someone requests a pizza party, we can say, ‘How about a grain bowl filled with seasonal vegetables instead?’” Vasaeli says.

The chef action stations at the Escondido location are another high-visibility way to make the shift to plant-based food, and they’re always popular, Vasaeli adds, “because it’s fresh cooking.” So, plant-based based menu items get into the spotlight that way, with chefs cooking zucchini “zoodles” with heirloom tomatoes, garlic and fresh basil, for example, or cauliflower steaks with a rich caper sauce.

As another way to highlight plant-based food, Palomar has created cool videos done in the style of the popular online series Tasty cooking videos. Featured recipes include a plant-powered smoothie and avocado chocolate mousse with pomegranate seeds.

Jackfruit is appearing on menus in barbecue sliders, and tofu is prepared a variety of ways, seared like steak and flavored with Asian sauces. Grill menus have also been revamped, and a housemade quinoa-black bean burger has debuted, with a lower food cost than meat, even with the added labor of making the veggie burgers in-house.

That’s another factor in the plant-based shift—cost. While coaxing the most irresistible flavors out of veggies takes real kitchen skill, sometimes more so than with meat, one positive is the lower food cost compared to meat.

Metzger adds that he sees making an impact on the health of Palomar employees is just as important as taking care of the patients.

“The patient, the end user, always comes first, but we have employees here who are with us for 45 years. The average length of stay for a patient is two to eight days,” Metzger says. “For our employees to avoid the onset of disease, we have to walk the walk.”