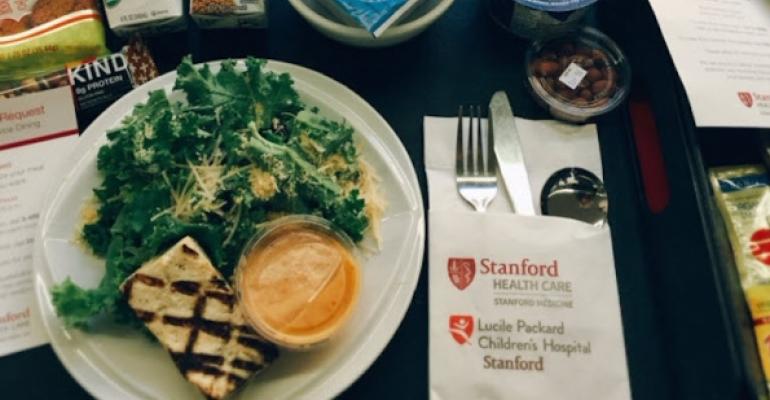 Most of the beef now served at Stanford Health Care in Palo Alto, Calif., comes from a local purveyor called Mindful Meats, which repurposes grass-fed, antibiotic- and hormone-free dairy cows past their milk-producing days into premium meats used by some of the Bay Area’s trendiest restaurants.

The deal with Mindful Meats is perhaps the most prominent sign of a wholesale reinvention of the in-house dining program Stanford Health Care that was launched three years ago. It also includes the sourcing of other local, organic and sustainable ingredients where feasible and the development of recipes to make best use of them.

“We’ve had a pretty consistent 20 percent increase in [retail] sales since 2013, which is pretty unbelievable,” says Helen Wirth, director of hospitality services. “I was predicting 6 percent at best,” she laughs.

What makes the transformation at Stanford Health Care even more impressive is that it has come despite rather antiquated facilities.

The hospital’s main kitchen dates to 1959—that’s the Eisenhower Administration for those who are counting—though Wirth downplays the facility’s vintage factor: “That’s not entirely unusual for large commercial kitchens,” she says. “You just have to make adjustments as to how you do your procurement, when you schedule your production, and how extensive and intensive your recipes and things like that are.”

In any case, things should improve in a few years when Stanford Health Care’s new 824,000-square-foot, 368-bed hospital—scheduled to open adjacent to the current facility in 2018—is ready. It will include a brand new production kitchen.

But that’s in the future. Today, the reality is that Stanford Health Care’s in-house dining operation executes some 4,600 retail transactions on an average day along with around 1,600 daily patient meals.

The bulk of those meals are now scratch-made rather than bulk-produced. At the retail level, they are made in front of customers at a series of food stations.

The transformation obviously involved some significant changes in procurement, production and service protocols but the dining team tried to keep the changes within certain parameters that didn’t involve simply eliminating traditional favorites.

“We took the standard items and basically made them real clean food that wasn’t processed,” Wirth says.

“For example, we still have french fries, but they’re made from a real potato product, not a processed product, and they have the least amount of chemicals and salt in it that we can buy frozen.” Unfortunately, she notes, the kitchen’s current capacity precludes the production of freshly made fries.

The fries are served at the grill station, which has evolved from a traditional concept where the most popular item was deep-fat-fried chicken fingers rolled in a tortilla wrap and topped with ranch dressing and iceberg lettuce.

“We changed that model completely by offering eight healthy sandwiches instead,” Wirth says. “So instead of [deep fried] chicken fingers item, we have a roasted cold chicken sandwich served on a whole-wheat bun with an avocado spread and piled high with lots of fresh vegetables.”

Using new and different ingredients did mean some tinkering with menus. For example, the beef supplied by Mindful Meats tastes somewhat different from standard commercial beef given its grass-fed nature, Wirth points out. “It’s generally leaner and the cuts are different and so you have to cook them differently,” she says. “Our executive chef works closely with Mindful Meats and they did a lot of tasting of recipes. There were some things we didn’t use, at least at first, because it didn’t meet our standards—there was one that we thought was too tough, for example—but Mindful Meats worked with us on getting a product that would work.“

To add local producers like Mindful Meats to the approved supplier list, the hospital worked with management company Sodexo and an outside consultant, local restaurateur Jesse Cool, who also helped train kitchen staff to make the new scratch-intensive recipes. Once they passed Sodexo’s rigorous certification process, the vendors—many of them smaller local firms—also became eligible to work with other Sodexo accounts, a benefit for both parties.

Wirth says a measured approach that respected traditional customer preferences was key. “We didn’t just take things away and say, ‘you can only eat this,’” she says. “We transformed, but we still offer a basic burger and hot dogs on our grill menu for those who want them. We still have french fries.”

But there’s so much more that is both appealing and healthful. Wirth cites the grab-and-go selections. “Its not just celery or carrots with ranch dip now,” she notes. “Instead, you get a nice crudité with local organic vegetables and a homemade green goddess dressing and things like that.”