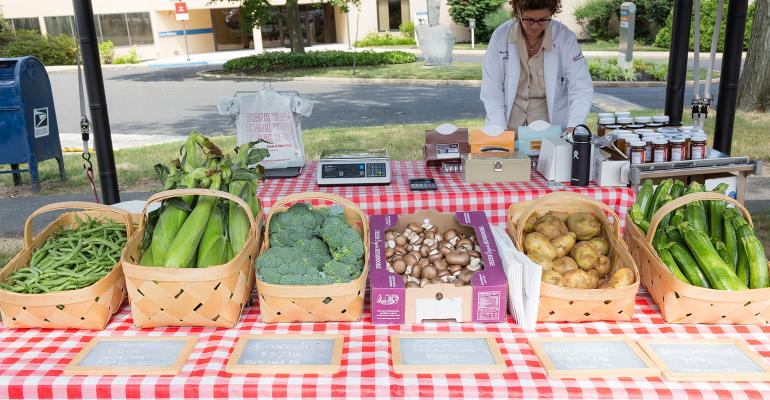 How one Philadelphia-based initiative is transforming menus at local healthcare centers for the better.

Philadelphia might be known as the City of Brotherly Love, but it’s not exactly the City of Good Health. Within the country’s top 10 largest cities, it boasts some of the highest rates of diet-related chronic diseases like high blood pressure and type 2 diabetes. But Good Food, Healthy Hospitals (GFHH) is seeking to change that.

A joint effort by the Philadelphia Department of Public Health and nonprofit regional food distributor The Common Market, the four-year program is transforming the food environment at many Philadelphia hospitals. And in doing so, making it easier for patients, visitors and staff to make better choices that can improve their health.

The premise is simple: Local hospitals who want to promote a healthier, more sustainable food culture pledge to adopt the program’s voluntary nutrition standards in core areas like food purchasing, patient meals, cafeteria and on-site restaurant menus, catering menus and vending. Hospitals can choose which standards they want to implement: Gold status is awarded to those who implement four or more, silver for three or more and bronze for two or more. In return, the GFHH project team helps hospitals put the standards into place by helping hospital leadership and foodservice staff identify their priorities—and making it happen. Often, that involves conducting nutritional analyses, advising on menu planning or assisting with product purchasing. “We work closely with those who are doing the implementation. Depending on the hospital, it could be foodservice directors, wellness managers or dietitians,” says Healthy Food Procurement Coordinator Catherine Bartoli. “There’s a low barrier to entry.”

It all started back in 2014, when an executive mayoral order called on the Department of Public Health to formalize nutrition standards for all city departments. After securing a four-year CDC grant to expand the work in 2015, the Department of Health set its sights on hospitals. “We thought hospitals would be the first logical step to expand outside of city agencies,” Bartoli says. “The difference is we don’t have jurisdiction over hospitals. So we put together this voluntary program.”

Bartoli and her team started with the nutrition standards that had been developed for the city departments, adjusting them to make the standards more applicable for hospitals. They partnered with the Common Market to make it easier for hospitals to purchase some of their healthy food offerings from local and regional farms.

Though being part of the program doesn’t require hospitals to purchase local foods, there’s good reason for them to do so when possible. Fruits and vegetables grown nearby are fresher and likely retain more nutrients than those that have been flown in from far away. Just as important, buying local supports the regional economy. And working through the Common Market often helps hospitals purchase local foods seamlessly, says Common Market Mid-Atlantic Deputy Director Jillian Dy. “Because we source directly from regional farmers, we ease some of those logistical challenges,” she says.

One of those is Temple University Hospital in North Philadelphia, which has implemented the standards throughout its entire regional health system. Temple, whose foodservice program is self-operated, has removed sugar-sweetened beverages from patient floors and replaced them with water and naturally flavored seltzers and serves fruit-based desserts instead of grain-based ones on patient menus.

The hospital has also taken significant steps to serve more local foods. It features sustainable and locally grown produce and antibiotic-free chicken in the salad bar and in patient meals, and sells local produce instead of candy or chips at registers. Foodservice staff also create special patient and cafeteria menus that highlight a seasonal ingredient. Temple has even started a farm stand where hospital employees can buy local, seasonal ingredients on-site. “Aside from cafeteria procurement, we’re also getting local food into hospitals through farm stands and employee CSA programs,” Dy says.

As the program enters its fourth and final year, Bartoli and her team are starting to figure out ways that the Department of Health can continue to help hospitals on a more limited budget. And she’s working with hospitals to ensure that they can continue to move toward their healthy food goals more independently. “We’re looking at which hospitals are more autonomous and can continue on their way, building and reinforcing what they’ve already been doing,” she says. “And we can pull out larger asks and work with them as a group to set goals.”