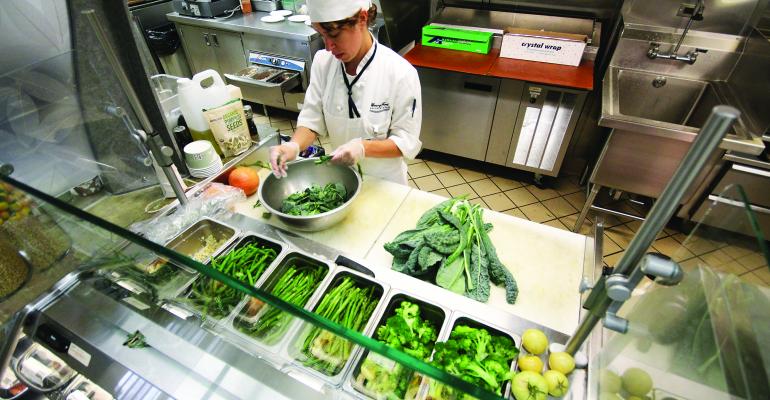 <p>Henry Ford Health System has spent over a decade formulating a database of recipes that have been tested, documented and formulated to maximize both flavor and nutrition.</p>
News & Trends>Healthcare

The deal gives New Delhi National Capital Region more than 500 recipes for use in corporate food courts and other venues.

Henry Ford Hospitals was honored in 2013 as the FM Best Concept Awards Best of Show winner for its commitment to wellness through its LiveWell initiative. One of the fruits of that initiative was a sophisticated database of recipes, many of them based on traditional favorites, which retain customer appeal while reducing fat and sodium.

That database has now gone international thanks to an agreement between the Henry Ford Innovation Institute and the New Delhi National Capital Region (NDNCR), representing public and private entities in India’s national capital. The deal gives the NDNCR access to more than 500 recipes developed by Henry Ford’s dining team that are currently being used across the system to provide patients, staff and visitors with healthful but tasty dining choices.

Currently, two food courts offering selections from the database have opened in New Delhi, with deals for several others inked, one in a university setting. Plans call for sales in more venues, including schools and even home delivery. One recent study indicated that the country is on the cusp on a health crisis fueled by rising obesity rates, with childhood obesity rates in New Delhi increasing 50 percent in the past decade.

“[The recipe database] is something we’ve been working on for over a decade,” says John Miller, system director of culinary wellness for Henry Ford health System. He notes the considerable investment in time and resources it took to develop it.

“We thought there might be a market for a product that’s been tested and has all the nutritional information, but it’s only been in the last year or so that it’s come to fruition and we were able to take something we’ve already standardized across our own system and with the assistance of the Innovation Institute put this deal together.”

The database consists primarily of entrée and side type items but also includes desserts and various other meal components, Miller says. Some of the dishes are flexible enough to be modified to, for example, meet India’s substantial population of Hindu vegetarians by replacing the meat component with a vegetable protein.

Henry Ford’s culinary department continues to develop new recipes to accommodate the continually changing tastes of its customers but these won’t be included in the package sent to India unless there’s a subsequent deal.

Miller did indicate that there is a growing market both internationally and domestically for recipes that have been tested and their nutritionals documented.

Meanwhile, the deal with NDNCR represents a win-win for both parties, said Henry Ford Health System Vice President/Chief Innovation Officer Mark Coticchia in a statement announcing the deal: "The people of India have more access to transformative, sustainable health and wellness alternatives, and, the deal allows Henry Ford to expand its services to the people of Michigan."