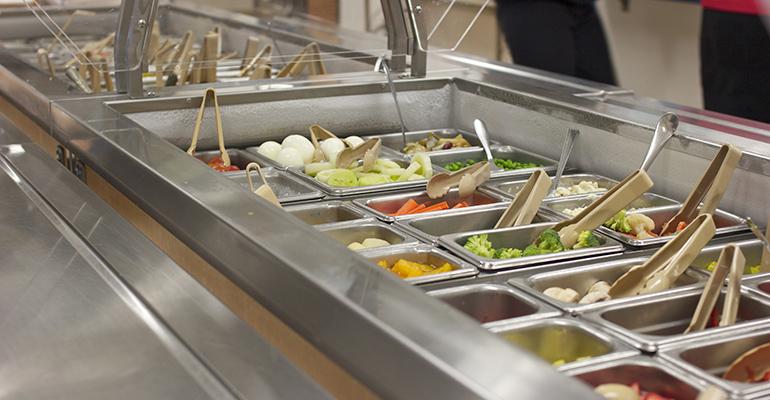 Mason General Hospital supports the local economy, and the health of its patrons, through contracts with area vendors.

The Pacific Northwest is esteemed for its James Beard Award-winning chefs and what’s-hot-now food truck openings. But plenty of on-trend foods are eaten out of the limelight, in places like Mason General Hospital in western Washington.

John Cruse, executive chef of culinary and nutrition services, has been serving food grown or made near the rural hospital since long before local was a buzzword: In 2001, hospital patients, visitors and staff started dining on fresh pasta made by a local restaurant owner. The new source shifted Cruse’s perspective—and his buying habits.

“Supporting local businesses which support the hospital through local tax dollars makes a lot of sense,” he says. “It keeps them viable. It keeps them open.”

To elevate the hospital’s ingredient list and shore up jobs in the community, the former corporate chef and graduate of The Culinary Institute of America sought out other local producers. Today, the bistro incorporates products from a four-county area into its 700 daily meals as a matter of course.

In the height of the growing season, Cruse purchases from about 15 local vendors, including growers of blueberries, microgreens, squash, mixed vegetables and herbs. The hospital also buys farmstead cheeses, whole-milk yogurt, small-batch fermented sauerkraut, chicken, alpaca and products such as granola, tea blends, baked goods, garden burgers and locally roasted coffee. About 8 percent of ingredients used in daily specials, the salad bar and the grab-and-go coolers are local.

“The biggest hurdle is finding these products,” Cruse says. Word-of-mouth referrals are his best source for identifying new growers and food entrepreneurs. Small farms and food companies can start (and shutter) frequently, so he manages a shifting accounts roster.

To educate consumers, Cruse and his staff post information about vendors near their products in the coolers and on sales racks. This year, they plan to replace the paper signs with a 46-inch screen that will display nutritional information and feature a loop of brief video clips about local vendors.

One of those vendors was formed through a partnership between the hospital and groups serving local youth. Through the HOPE Garden Project, youth operate a half-acre vegetable patch on land donated by the hospital. They’re now one of the bistro’s vegetable suppliers and frequent visitors: students run food demonstrations during the harvest season.

Some Washington-made products, such as Beecher’s cheese from Seattle and flour milled from Washington wheat, are included in Cruse’s regular shipment from a traditional distributor. But it’s a challenge to coordinate delivery of goods produced nearby. Food advocates are developing a distribution system in the area, but until it’s operational, producers are on their own. Some deliver to the hospital independently, others bundle deliveries based on location. Cruse orders local items weekly or biweekly, depending on shelf life and seasonality. Vendors invoice the bistro directly.

“We have good working relationships,” he says. “I like to call them partnerships because we’re benefiting each other.”

Local products cost more, but Cruse says because the hospital is public, it operates on a slimmer margin than a private hospital or commercial restaurant. Through budget planning, they can absorb the cost of specialty items while still offering affordable meals. (A hot meal costs no more than $6.50.)

That’s important. In 2013, Mason County ranked 30th out of 39 counties in per capita personal income. The hospital has become a hub where limited-income community members gather to eat made-from-scratch meals. In addition to local salad bar staples (such as greens, kraut and local cheese), Cruse may serve alpaca in a stroganoff, chili or meatloaf or make tandoori chicken with local yogurt. Local products are also part of the continental breakfast.

Doughnuts from a neighboring county may not hit healthy targets, but the staff encourages patrons to fill their plates with beneficial options. A number of grab-and-go items are dotted with color-coded labels: “Choose Often,” “Good Choice” or “On Occasion.” Most of the hospital’s local products are good-for-you choices, like bottles of kombucha and kefir water, which were added at the beginning of the year as part of a hospitalwide effort to reduce soda consumption.

By next year, Cruse aims to source 10 percent of Mason General’s food from local vendors. In another five years, he’s shooting for 50 percent. In a decade? He says he’d like that number to hit 70 percent, or even higher.

“We’re willing to invest all of our resources to source proteins, produce and locally made products from local producers.”

Jennifer Crain is a writer in Washington state, specializing in food production, distribution and business. Learn more about her work at jennifercrain.com.