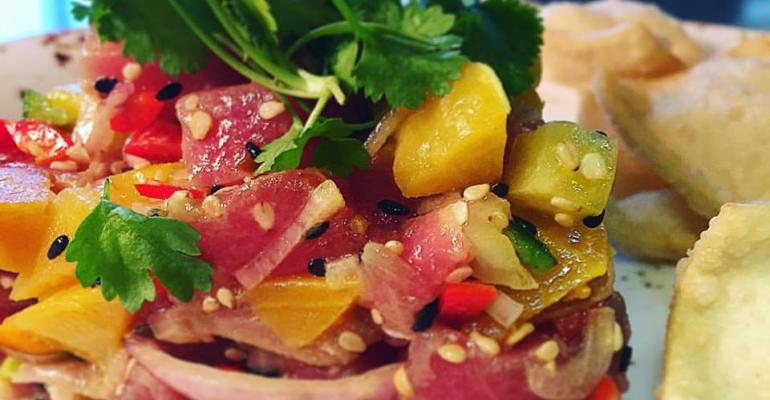 <p>A tuna tartare dish, one of the selections on the Castle Rock Adventist menu.</p>
News & Trends>Healthcare

These days, it’s no longer unusual to find a smattering of tomato and herb plants or even a few raised garden beds on a hospital’s campus. But 15,000 square feet of outdoor space devoted solely to growing fresh produce? Not exactly typical.

When Castle Rock Adventist Hospital opened in 2011 in Castle Rock, Colo., the goal was to build a hospital that functioned as a partner in community healthcare. Rather than simply being a place where people came when they were sick, Castle Rock also sought to help folks make more of the lifestyle choices that would help them stay healthier. That meant hosting lifestyle seminars and training programs to promote whole-person wellness. It also meant opening a hospital garden and restaurant that would help encourage more people to make wholesome, nutritious food choices.

The restaurant, Manna, and the garden, called the Garden of Eatin’, work in tandem to help Castle Rock community members eat better while dining out—and while at home. “We knew that if we tied [the garden and restaurant] in to the community, to get people involved in a healthy lifestyle, it would be better,” says Nutrition Manager and Executive Chef Daniel Skay. “We wanted to be proactive, not reactive.”

At Manna, which Skay founded in 2013, that involves serving farm-to-table fare made from ingredients that are grown and produced locally, sustainably and humanely. During the summer growing season, roughly a quarter of the restaurant’s produce comes from the Garden of Eatin’. “We grow a whole onslaught of different things. We have 20 varieties of tomatoes, 10 varieties of radishes, six different kinds of carrots, and three rows of corn, beans and squash,” Skay says. The restaurant also partners with area producers to serve local dairy products, meat and poultry, bread, honey, pickles, condiments and even all-natural soda.

The casual sit-down restaurant is open to doctors, hospital staff and hospital visitors. But the majority of Manna’s customers are just community members looking for a fresh, delicious meal that won’t break the bank. “We’ve been increasing our sales volume every month. Word of mouth has traveled,” Skay says. And though prices at Manna are higher than those at the average hospital cafeteria, they’re still considerably lower than what you’d find at most restaurants: Burgers and sandwiches are priced between $5 and $8, while entrees top out at $10. “The quality is there,” Skay says. “Customers know they’re getting a better product, and they’re willing to pay more.”

But the Garden of Eatin’ isn’t just there to supply Manna. It also features nearly 100 community garden plots, which are rented out to members for $75 per season. While volunteers previously ran the garden, this spring, Skay decided to hire resident farmer Brian Fitzgerald to better help community members manage their plots. “We encourage gardeners to use more organic methods. He’s a resource to help them understand the power of proper growing techniques,” Skay says. For instance, showing plot owners how to manage aphids without the use of synthetic pesticides, or enhancing their plot’s soil naturally using things like Epsom salt.

With Fitzgerald on board, the goal is to increase the garden’s already impressive yield—and potentially find ways to grow fresh produce year-round. In the future, Skay hopes to install aeroponic tower gardens along the windows of his kitchen. He also hopes to secure funding to build a solarium atrium near Manna’s seating area, where customers can actually see their food being grown. “I’m not pushy, but I’m passionate, and passion promotes action,” Skay says. “The sky’s the limit.”

Connecting Farms to Hospitals in the Northeast
Jan 12, 2015