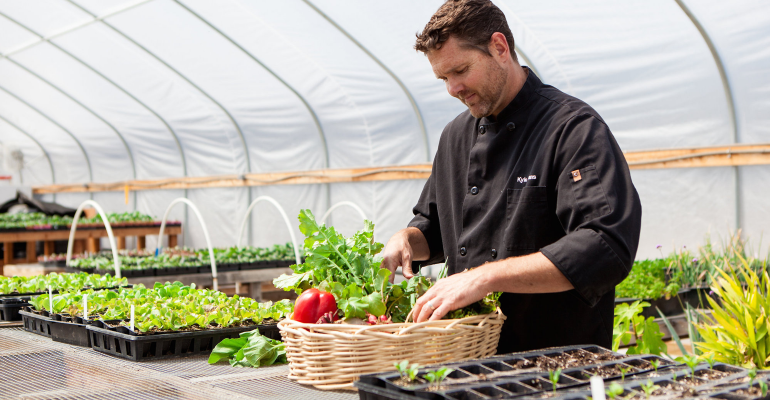 Frank Howard Memorial Hospital
Executive Chef Kyle Evans checks out some of the harvest in the Commonwealth Garden’s 3,000-square-foot greenhouse, which allows crop production over the winter to continue.
News & Trends>Healthcare

Hospital gets produce from next-door farm

Frank Howard Memorial Hospital sits next to a five-acre certified organic community garden and greenhouse, which supplies it with plenty of fresh produce.

Frank R. Howard Memorial Hospital in Willits, Calif., has been reaping the bounty from a five-acre Commonwealth Garden located across the street. The small (25 licensed beds) critical access hospital operates the 93-seat Roots retail restaurant on its premises, which has become a magnet for community diners as the place with “the best food for the best price,” according to Ananda Johnson, director of the Commonwealth Garden.

The Commonwealth Garden, which became a registered organic garden five years ago, is managed by the hospital in partnership with the Frank R. Howard Foundation, which donated the land. It has been in operation since 2008 and has been next door to the hospital for the past two years, ever since the institution moved into its new building at the location.

The garden operates from late spring through early fall, with the 3,000-square-foot greenhouse taking up the slack over the winter months. It encompasses an orchard growing a variety of crops from heirloom peaches and Asian pears to apples, cherries, nectarines and even walnuts. Meanwhile, 36 gardens beds ranging from 80 to 100 feet in length produce onions, potatoes, carrots, beets, kale, chard, tomatoes and various squashes among other vegetables.

The bounty is used in the kitchen that services both the restaurant, which is the facility’s only retail dining outlets, and the room service-style patient dining service, which is available from 7 a.m. to 7 p.m. daily.

Roots has three serving areas: a grill, a salad/sandwich station and the signature action station, where diners can get freshly prepared dishes made with an emphasis on whole grains and fresh vegetables from the nearby garden.

“We have kind of a sauté approach,” explains Executive Chef Kyle Evans. “We always have whole grain, a quinoa or brown rice or something along those lines, plus a legume in addition to fresh veggies and a freshly made sauce [to create] like a garbanzo cucumber tomato bean salad with a white bean lemon tahini sauce. We really try to promote plant-based foods and highlight their flavor and nutrient density.”

Customer counts at Roots average several hundred a day, boosted not only by the eatery’s growing reputation in the community but also by the hospital’s status as a major provider of outpatient services. It is open from 7 a.m. to 5 p.m. daily with a limited menu still available in the off hours. Roots Restaurant inside the hospital emphasizes a plant-based menu including plenty of ingredients from the Commonwealth Garden.

The patient dining menu seeks to complement the seasonality of the crops from the garden, with fare such as a polenta cake with roasted ratatouille vegetables from the garden or, in the colder months, a butternut squash risotto. Currently, Evans is emphasizing the maturing asparagus crop in recipes such as a wild rice pilaf dish with freshly cut asparagus.

The fare is often accompanied by educational programs such as a chef’s corner session or dietitian talk discussing the dishes, the local source of the ingredients and why they are healthy.

Recently, a diabetes group not only came in for a discussion about the role of diet in controlling the disease but also took a walk through the garden as a form of healthy exercise.

The hospital kitchen gets all of the Commonwealth Garden production over the cold months. In the summer, a fifth of the crop yield is given to the community, but the rest is more than enough to satisfy the kitchen’s needs other than for produce such as citrus, pineapples and avocados that can’t grow in the Northern California climate.

The garden is worked by two Education Foundation employees and volunteers from the hospital and community. Hospital employees can earn wellness points working there, which helps qualify them for insurance discounts. In fact, Frank Howard Hospital’s wellness program recently received gold level recognition from the Wellness Council of America for its commitment to workplace wellness.

“It’s our farm, there’s no middle man, so it’s just us creating the food that’s grown for us and then presenting it on the plate, so it’s just a closer relationship to the food,” Evans summarizes. “We’re trying to break the stigma of hospital food, trying to cook real food, seasonal food and leaning toward the healthy side of things.”