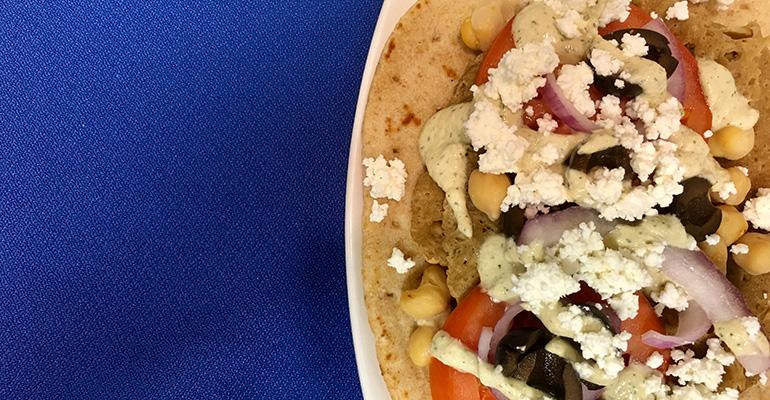 The Beaver Dam Community Hospital Café is cleaning up their menu by making it Blue Zone-friendly.

You might not have to live in a Blue Zone to reap some of the health benefits. This summer, the Beaver Dam Community Hospital Café (BDCH) in Dodge County, Wis., became a Blue Zones Project-approved restaurant.

“Nutrition is definitely involved in the healing process,” says Jim Feil, BDCH Café director of foodservice. “People may be visiting the doctor, and the doctor is talking about eating better. We want the healthier choice to be easy for them to partake in.”

Blue Zones are rare hot spots in the world where people are known for living longer—like Okinawa, Japan; Sardinia, Italy; and Ikaria, Greece. Though each Blue Zone has its own culture and customs, all share lifestyle characteristics that seem to promote above-average health and well-being. The Blue Zones Project aims to partner with communities here in the U.S. to make it easier for people to make similar healthy choices. These can include things like improving walkability, fostering social connections, promoting a positive outlook and eating wisely. In an effort to help their patients be more proactive about their health, Beaver Dam Community Hospital decided to sponsor a local Blue Zones Project chapter in Dodge County back in 2013. “Our CEO Kim Miller heard about Blue Zones Projects that were happening in a number of areas, including the entire state of Iowa. She was a driving force in getting things started here,” Feil says.

For the Blue Zones Project, part of making it easy for people to eat wisely means helping restaurants create healthier environments. That’s where BDCH Café, which serves up to 900 meals daily to hospital staff and visitors, came in. “As a sponsor of the project, the hospital has a priority on health and wellness in the community,” Hill says. “Since the café operates as a restaurant, we were able to qualify it as Blue Zones-approved.”

The approval process was relatively easy. “It wasn’t a huge overhaul,” says Feil. “It was about adding more healthy offerings in, not about restricting things.” To become Blue Zones-approved, the café needed to begin offering at least one entrée that met the Blue Zone plant-based nutritional guidelines. Feil and his team developed 10 items that are served on a rotating basis, including tofu Veracruz with peppers and tomatoes; seitan gyros served in whole-wheat pita with tofu tzatziki; sweet potato black bean tacos with chipotle cashew cream sauce; coconut red curry vegetable stir-fry with brown rice; and build-your-own avocado toast.

The Blue Zones Project encourages using local ingredients when possible. So the café partnered with Two Good Farms in nearby Columbus, Wis., and began incorporating ingredients from the hospital’s own organic garden. In all, Feil estimates that 15 percent to 20 percent of the ingredients he uses are local. “When a menu item features a local ingredient, we’ll put that in the description,” he says. In addition to adding new menu items, the café had to take other steps that help promote healthy eating by default. The Blue Zones Project has a list of 66 best restaurant practices that have been proven to help people dine smarter. In order to get Blue Zones approved, a restaurant needs to adopt at least 44 of them. “The restaurant can decide which ones make sense for their operations and their market,” Hill says.

The cafe opted to stop serving sugar-sweetened beverages in favor of water and tea, as well as put healthy snack and side options in eyesight. “The packaged nuts and fruits are up by the register instead of the chips and candy bars,” Feil says. He also moved the salt shakers from the dining tables to the condiment counter. “People can still get sale, but its a little bit less convenient to add to their meal,” he says. The staff was trained on how to upsell healthier items, too. French fry sides are still available, but instead of offering them outright, staff ask customers whether they want a fruit cup or veggie side instead.

Since getting Blue Zone-approved in July, the café has been working to spread the word. They held a ribbon-cutting ceremony over the summer, and Feil regularly shares updates and pictures of menu items on social media. So far, it’s been a success: The Blue Zone menu items are regularly among the top five sold. “Since we’ve been certified, we’ve had people stopping in and trying the new menu items,” Feil says.