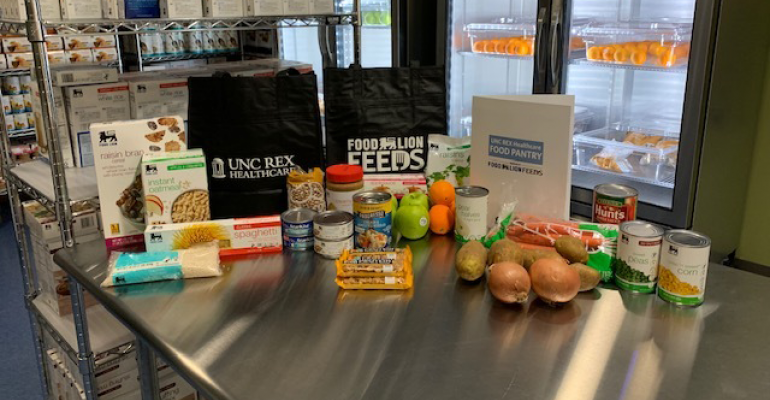 Inspired by similar programs at hospitals from around the country, UNC REX in Raleigh, N.C., opened the UNC REX Healthcare Food Pantry Nourished by Food Lion Feeds in November. “We realized that there's some patients that may have to choose between medication and food, and we just want to make sure that our patients weren't faced with those decisions,” says Tara Freeman, manager, UNC REX Food Panty. “By opening a food pantry, we could care for our patients once they leave the hospital.”

According to a recent report by the American Hospital Association, children who have limited or uncertain access to adequate food have an increased risk for developmental issues. Meanwhile adults who experience food insecurity are more at risk for chronic diseases, leading to more hospital readmissions and medical treatments. 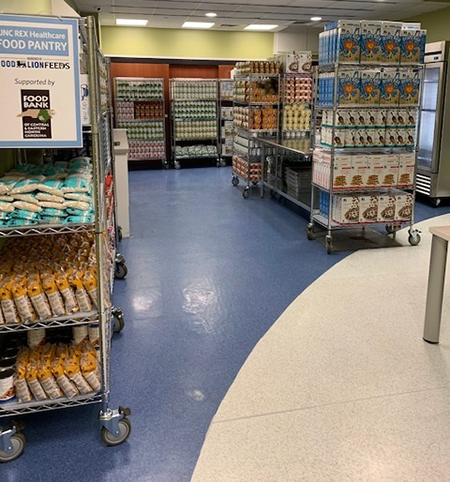 “We discovered that there was a decent population of our patients who would likely qualify for a food pantry type of program,” says Freeman. “We have a deep understanding that hunger is fluid, and that a week stay for a patient in the hospital could inhibit their ability to purchase groceries when they came home.”

The Rex foodservice team reached out to those at Boston Medical Center, which has a robust food pantry program. “We dove in and started to research the concept,” says Freeman. “Folks at Boston Medical were gracious enough to talk to us several times in several different departments of our organization actually. Then we approached our executive team and they were totally on board.”

In order to qualify patients for the program, the hospital’s case management personnel screen those who will soon be discharged. “Each patient is asked, ‘In the past 12 months, have you run out of food and didn't have the money to buy more?’ and ‘In the past 12 months, did the food that you had not last and you didn't have money to buy more?’” says Freeman.

Food pantry volunteers then meet with qualifying patients before they are discharged to go over a list of available food items and make selections based on personal preference, dietary restrictions and culturally specific needs. “Studies show that when food pantries offer clients choice, they're far more successful,” says Freeman. “We want to make sure that we're sending home patients with food that they're actually going to want to consume.”

Once the patients are screened and interviewed for food preference, a fax is sent to the food pantry. Once patient’s discharge orders are in, the food pantry team creates a bag of free food stocked to feed a family of four for three days.  About 25 percent of Rex’s patients qualify, says Freeman, which amounts to the food pantry creating food bags for about five patients a day. 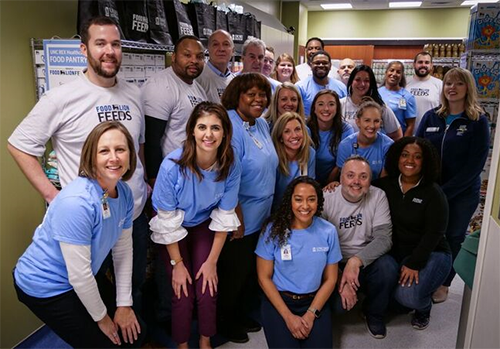 “Food Lion gave us a 100-item list that we could choose foods from,” says Freeman. “From that list we've worked with our dietitians to trim it down to about 40 items. We decided that it was going to be too difficult to start dietary assessments with every single patient so everything in the food pantry is low sugar and sodium. We're not sending them home with cookies or anything like that.”

Going forward, the UNC REX Healthcare Food Pantry will have an account with Food Bank of North Central and Eastern North Carolina. “Essentially we’ll shop the food bank and then they deliver the food to the hospital,” says Freeman.

In addition to bechmarking best practices with Boston Medical Center, Freeman says one of the keys to the food pantry’s success was that UNC Rex created a work group dedicated to its launch. “In the leadup to November, the manager of case management, the director of nursing, an administrative fellow and IT staff worked together to make sure all aspects of the operations and process were in place,” says Freeman. “We also hired a consultant from Community Food Lab because we're healthcare people not food pantry people. He was critical to keeping us focused on getting us to our launch date and provided invaluable insight about food systems.”