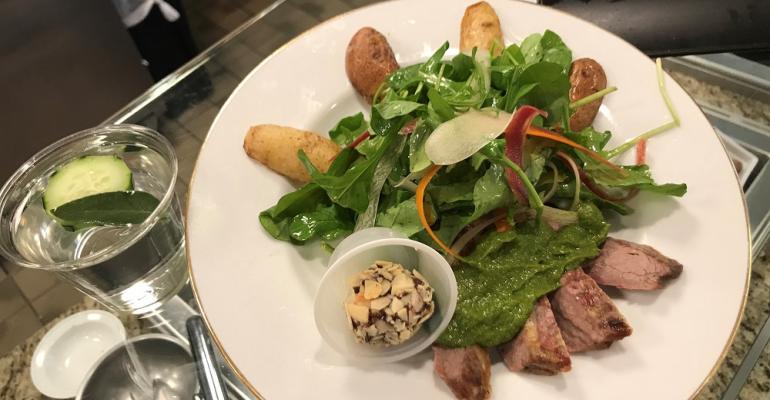 Wild salmon escabeche salad. Broccoli pesto and goat cheese flatbread with potato and leek soup. Brazilian tofu stew with coconut milk, tomatoes, bell pepper and Thai basil. Oh, and would you like a glass of cucumber sage or citrus rosemary water with that?

If you’re looking for healthy menu options at a hospital, you might expect to come across a grilled chicken salad or a hummus plate. But the offerings at Sharp HealthCare, whose dining program is managed by Sodexo, sound more like the kind of thing you’d find at a farm-to-table restaurant with a five-star Yelp rating. 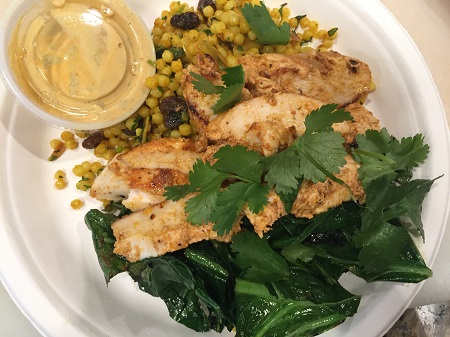 “Inflammation and oxidative stress are major contributors to illness and disease,” explains Champagne Luu-Carey, marketing communications manager for Sodexo at Sharp HealthCare, located in San Diego. “Through science, we know that certain foods can influence genes that can turn on or off inflammatory processes in the body.” That’s where Nourish comes in. By utilizing nutrient-dense foods prepared in specific ways, menu items can help support health at the genetic level by managing inflammation and oxidative stress.

• Master foods like cruciferous vegetables are rich in specific bioactive compounds that activate genes to reduce or prevent inflammation.
• Influencer foods like avocado and salmon are detoxifying and rich in B vitamins and omega-3 fatty acids.
• Superfoods like chickpeas and flaxseeds are nutrient-dense foods with a wide variety of vitamins and minerals per bite.
• Enabler foods like bananas and yogurt are foods that contain prebiotics and probiotics to support gut health. 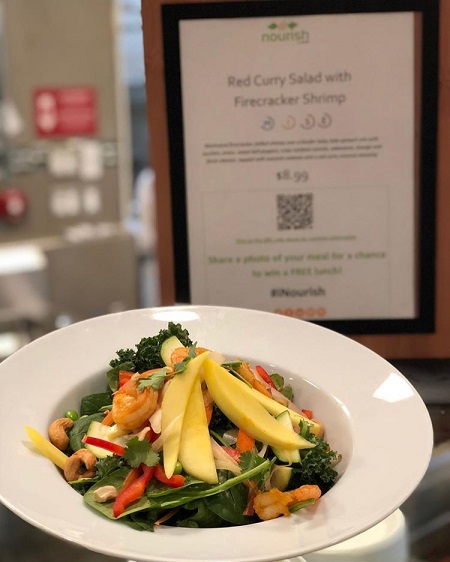 At the same time, specific culinary techniques aim to extract the maximum amount of nutrition from each food. For instance, “we understand that when you cook broccoli, a lot of the bioactive compounds are destroyed by the heat,” Luu-Carey says. “So for our broccoli pesto recipe, we’ll use the ‘cooked-raw’ approach. We’ll steam and puree broccoli and top it with shaved raw broccoli to put those bioactives back in.” The “hack-and-hold” method is another example: By chopping cruciferous vegetables 15 to 30 minutes before serving, more protective bioactive compounds are released from the vegetables.

If you think this all sounds way too complicated for a hospital patient menu, you’re not alone. “Initially our chefs were like, ‘we can’t do this.’ Some of them were worried about costs, while others were worried about familiarity,” says Lauren Blacker, resident district manager for Sodexo at Sharp Healthcare. But giving the chefs a list of ingredients and cooking techniques empowered them to get creative with recipe development, which took two years to complete. “Once we gave them the operating principles, they ran with it,” she says.

Cost problems, for instance, were solved by bringing more ingredient prep in-house. Rather than buy chickpea flour from a vendor, the chefs made their own by roasting dried chickpeas and grinding them into a powder. Keeping the emphasis on plant-based ingredients also makes a difference. “We don’t use meat as the star of the show,” says Serena Kleen, operations manager for Sodexo at Sharp Healthcare. Focusing on portion control helps too. “Satiety lasts a long time [with these ingredients], so people don’t need to eat a ton of food to meet their needs,” she adds.

Nourish’s retail offerings launched earlier this year in Sharp’s Mindful Cafes, located across the healthcare system’s five hospital sites. Within months, sales had spiked by as much as 72 percent, while the number of customers swelled by more than 40 percent in some locations. “The feedback from the hospital staff is extremely positive. They love the food and appreciate the concept,” says Luu-Carey, who adds that the healthier menu has also increased staff nutrition knowledge.

With so much success on the retail side, the expectations are high for the patient menu launch slated for fall of 2018. “These deeply beautiful, flavorful meals are designed to leverage the menu as an education platform,” says Archibald. “It no longer lets us just feed you. It engages the customer fully.” 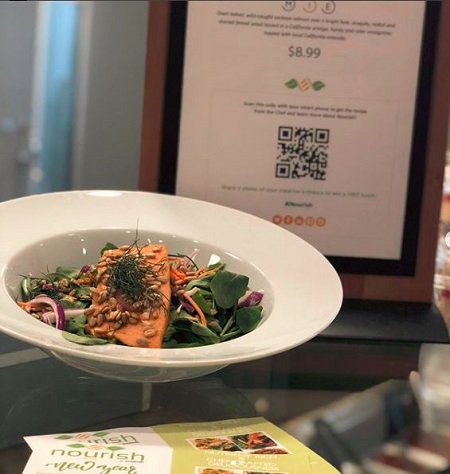