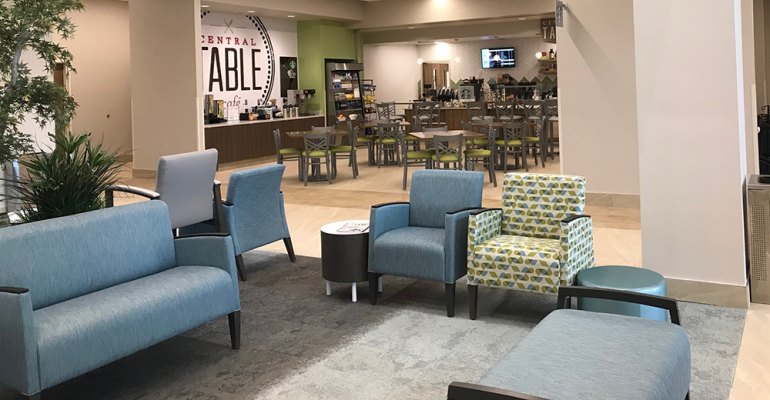 A hospital restaurant competes beyond the four walls

Central Table Café looks and feels like a standalone restaurant—one that just happens to be in a hospital.

Actually, three hospitals, with more on the way. Morrison Healthcare’s answer to demand for a health- and wellness-centered product, Central Table is up and running in three locations: Regional Health Orthopedic & Specialty Hospital in Rapid City, S.D.; Mayo Clinic in Jacksonville, Fla.; and University of Miami Health System in Miami, Fla. Two more are in the pipeline.

The cafes, with a plant-forward menu, sustainable and efficient operations, minimal labor and infrastructure requirements and a design modeled on a commercial fast-casual restaurant, have won over patients, visitors and Morrison’s healthcare clients—along with the general public.

Because they tend to operate in satellite markets—away from a main hospital campus, with few options for healthy fare, Central Table sites also draw in guests from beyond the four walls of the facility. The Rapid City site, for example, is adjacent to a hotel and office buildings, which have fed traffic into the restaurant. 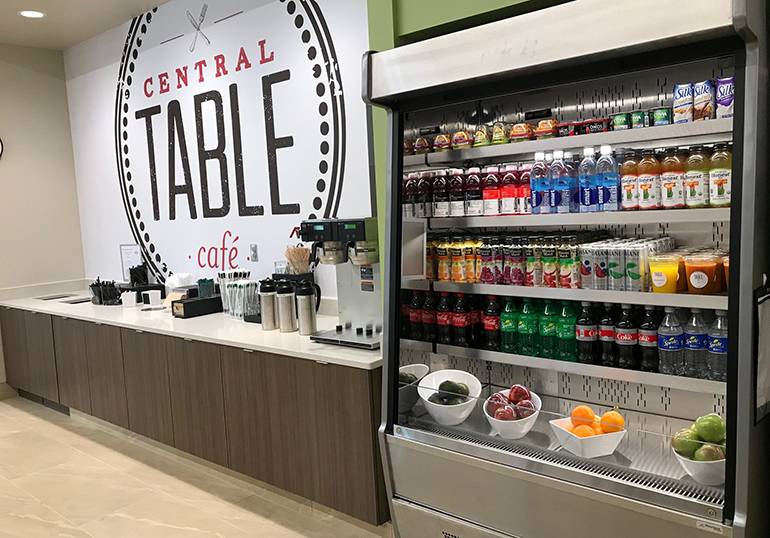 Since opening last January in Rapid City, for example, that strong response has resulted in sales 144% ahead of projections.

“Whenever clients approach us asking about health and wellness concepts, this is the first thing we pull out,” says Justin Newgaard, a corporate executive chef at Morrison.

Menu choices at Central Table, while streamlined, offer enough variety to appeal to a broad base. It’s a mix of oatmeal, greens, noodle and grain bowls along with smoothies, soups, salads and folded flatbreads, with flatbreads and a Southwestern-style bowl leading in orders. Bone broth and vegetable broth are available throughout the day.

The Rapid City location caters to a lot of orthopedic rehab patients—many of them athletes—so it’s logical that the menu stresses protein. “Add a protein” options for salads and bowls include braised pork or beef, grilled chicken, roasted turkey, vegan sausage, bacon, turkey bacon, egg or hummus. Whey powder, almond butter, spinach, flax and other seeds can be blended into smoothies.

Each location has the same core menu, with some nods to the local preferences. In Miami, café con leche and Cuban toast are a breakfast special, Cuban bread is an option for the flatbreads and Latin chicken soup is a choice. The Rapid City operation has partnered to buy locally butchered beef from a cattle supplier that specializes in animals with a smaller frame, lower weight and lower carbon footprint than conventional cattle. Onsite beehives supply the hospital with honey and help pollinate a seasonal garden. And about 65% of produce on the menu comes from local farmers during the warmer months. While it’s been challenging to find local grower partners near Miami, the Mayo Clinic location in Jacksonville buys about 45% of its produce from nearby farms during the growing season, Newgaard says.

How much each location pursues local partners depends on the individual hospitals’ purchasing policies and commitment, he adds.

Central Tables are also designed to minimize food waste. Pulp from a juicer is used to produce veggie patties and faux crab cakes; food scraps go to farmers. Sous vide is another tool that helps eliminate unused product. “If we have meatloaf on the menu, we can cook off a whole meatloaf, individually portion and vacuum seal it, then freeze it,” says Newgaard.

The menu is deliberately simple and can be executed with minimal equipment. About 35 ingredients can be combined for 20 or more build-your-own variations on entrees. The concept “is self-contained,” adds Pete McQuiston, senior director of food and nutrition for Rapid City Regional Health, Morrison Healthcare. The menu can be produced using induction burners, ventless ovens, juicers, blenders and an egg cooker. Because there is no grease and no hood, the cost to build out a space is about $1.4 million.

Three to four full-time equivalent employees can run the concept, which is typically open from breakfast through midafternoon. Central Tables range around 2,200 square feet and seat about 50 guests. About half of meals are takeout orders.

The restaurant in Rapid City has done such a good job winning over locals that online ordering and delivery are under consideration. “We’re moving toward partnering with Food Dudes or Bite Squad to make the menu available to the whole town,” says McQuiston.