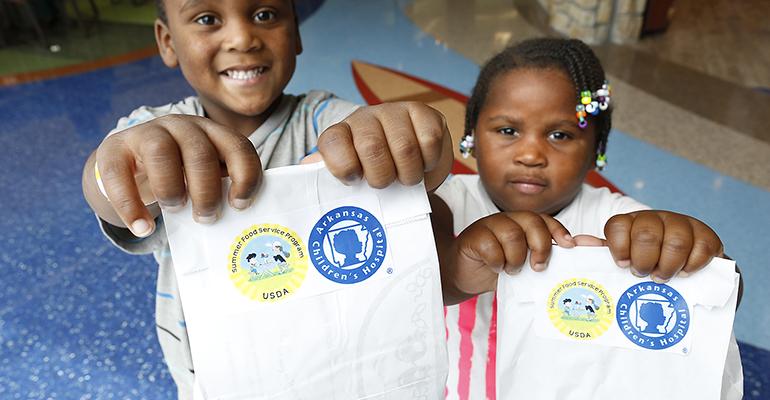 <p>Since the summer of 2013, free meals have been served to all children. About 75 meals are served each day, although the number peaks in the summer when school is out.</p>
News & Trends>Healthcare

Arkansas Children’s Hospital is screening patients for food insecurity and is serving free lunches to all children.

When food banks alone can’t solve a community’s childhood hunger problem, who should step in to help? If you’re Arkansas Children’s Hospital Harvey & Bernice Jones Professor of Developmental Pediatrics Patrick Casey, M.D., you might say that the answer ought to be hospitals.

More than 27 percent of families with children living in the state of Arkansas are food insecure, according to an April 2015 report from the pediatric health network Children’s HealthWatch. Officially, childhood food insecurity is defined as kids experiencing a reduction in the quality or quantity of meals because their caregivers can no longer protect them from inadequate household food resources. More simply? It’s kids just not having enough to eat.

Childhood food insecurity rates in Arkansas had remained relatively stable since Casey began studying the issue in the 1990s. But when the financial crisis hit in 2008, rates of food insecurity in the Little Rock area roughly doubled—and have yet to recover.

Pediatricians like Casey know that for kids, food insecurity can become a healthcare problem. Children who are food insecure are 19 percent more likely to be hospitalized and 31 percent more likely to be at risk for developmental delays than their well-fed counterparts, found the Children’s HealthWatch report. Childhood hunger is also linked to a higher prevalence of asthma, says Casey.

As rates of food insecurity began to spiral out of control, Casey knew it was time to take action. Serving on the hospital’s committee for community development, he explained the problem to the committee chairman. “We started thinking about what steps we could take on campus to try to influence food insecurity. As we started to develop ideas, it became obvious that we needed hospital administration on board,” he says. Before long, the hospital’s CEO agreed to support Casey’s mission to bring about change.

Recently, Arkansas Children’s Hospital (ACH) began screening patients for food insecurity in one of their general pediatric clinics. To determine whether a child is food insecure, pediatric residents ask parents two simple screening questions designed to suss out potential hunger problems. The first asks whether a parent recently worried about food running out before they had money to buy more; the second asks whether a family recently ran out of food before they had money to buy more.

Still, “diagnosing” a child with food insecurity isn’t much help unless you can feed them, too. And over the last few years, ACH has developed a number of programs to do just that. The hospital works with national hunger organization Share Our Strength to offer Cooking Matters and Cooking Matters at the Store—eight-week programs that teach families how to prepare healthier meals using inexpensive foods.

But that’s not all. In addition to learning how to cook healthier and more cheaply at home, food insecure families can get nutritious fare for their kids within the hospital itself. Starting in the summer of 2013, ACH partnered with Arkansas’ Department of Human Services to launch an at-risk feeding program that made free bagged meals available to children under 18.

The meals consist of prepackaged items like peanut butter and jelly or turkey sandwiches, fruit cups, cheese and raw vegetables like carrots or broccoli, which are usually put together assembly line style, says Director of Nutrition Services Will Walker, MS, RD. The meals are kept in a designated refrigerator in a retail outlet near the hospital entrance, and children can request a meal at the cash register.

Pediatricians who deem patients as food insecure will mention the feeding program to parents so they can take advantage, but the free meals are available to all kids. Walker spreads the word by posting signage in hospital clinics and elevators, as well as sending email blasts. Sometimes, he even has enough volunteers to place some in front of the retail outlet and invite kids and parents to take a meal.

This time of year, ACH typically gives out around 75 meals a day. But participation really spikes during the summer months, when kids don’t have access to free or reduced priced meals at school. “Then, it’s closer to 150 or 200 meals a day. Sometimes it’s as high as 300,” Walker says.

At $1.90 a meal, the cost can start to add up—but it’s an expense that Walker’s food program is able to budget for. “Being a hospital that’s doing well financially, we’re able to afford it,” he says. The real challenge is staffing the program. “We don’t really have a staff dedicated to doing this on a regular basis,” says Walker. Instead, the meals are put together by teen volunteers from local schools or by hospital volunteers. “But if we can’t get any, sometimes we’ll have to utilize our own staff for a week or two.”