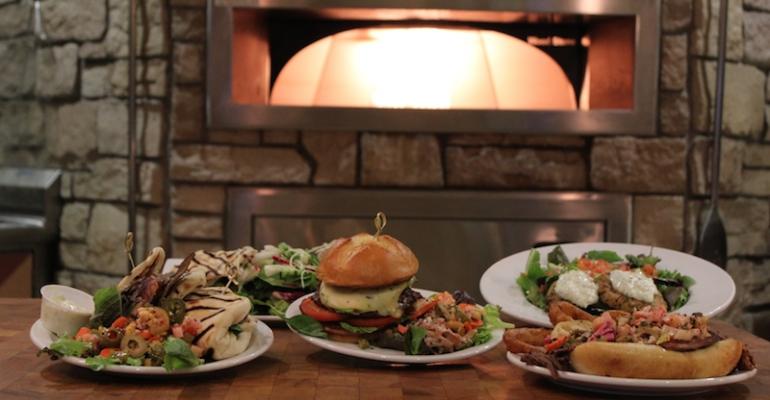 <p>Some of the dishes served recently at Montrose Hospital&#39;s Lobby Grille restaurant, which have drawn customers from nearby businesses and offices to the eatery.</p>
News & Trends>Healthcare

The Lobby Grille inside Montrose Memorial Hospital draws a wide clientele from the area with its food quality and convenient ordering.

The Lobby Grille is usually packed for lunch. The retail venue located inside Montrose Memorial Hospital in Colorado serves not only the healthcare facility’s staff and visitors, but also a large contingent of outsiders from nearby offices who have discovered that this hospital is a great place for a gourmet-quality—and very reasonably priced—lunch.

Making things even simpler is the Lobby Grill’s robust online ordering platform, along with a 15-minute ticket window designed to accommodate the hurried and harried hungry. The online ordering can be done either from computers or mobile devices, or from tablets at kiosks near the entrance set to the ordering web page.

Currently, Lobby Grill serves an average of 650 to 700 customers a day, with up to 40 percent coming from the outside to eat. Most customers these days are repeat business. There are doctor’s offices, businesses and fire and police departments nearby, and the word is out about Lobby Grille.

What brings them in? Mainly the food, of course, which is all made to order at a series of four serving stations. The menu is fixed for three-month periods, changing seasonally.

There is a flex station with a rotating menu, a hearth oven station serving pizzas and hot sandwiches, a Southwest station that emphasizes salads and a deli/grill station.

Also getting rave reviews is the new grass-fed beef burgers, which will remain on the menu over the next three months as well.

“We get the cedar plank salmon in fresh three times a week and it is cleaned on the premises,” says Vincent Loco, who mans the stir-fry station in addition to doing the salmon cleaning, sushi rolling and various other specialized tasks. “There are three or four of us who are capable of handling that [i.e., sushi rolling],” Loco says.

The restaurant also makes its own stock from leftover bones and carcasses from roasted chickens, and from the bones of steer that are purchased whole. The restaurant team buys 16 steer and 13 or 14 pigs each year from local farms.

“We get just about everything but the heads,” says Fulvia Lanier, who serves as director of food services for Montrose Memorial. That includes oxtail and shanks, which are used in osso bucco, while some of the other lesser cuts are used to make beef stock.

“We keep the briskets to use for barbecues in the warm months,” Lanier says. “We try to use the local pork and briskets for that.”

Lobby Grille is open 7:30 a.m. to 7 p.m. weekdays serving the full menu, and offers a limited selection of grab-and-go choices and pizza by the slice over the weekend.

The hot breakfast menu during the week revolves around dishes like a breakfast burrito and smoked carnita skillet that emphasize fresh, locally sourced products like pork and eggs, which are certified organic. “We buy almost 3,500 dozen eggs a year,” Lanier says proudly.

Those locally laid eggs also boost the visuals at the serving station because of their appearance. “They are all different colors—green, brown, white—because they come from different kinds of hens,” Lanier explains.

Local production also extends to the tortillas, made by a local bakery called Milpa, the green chili sauce (“We make 510 pounds of green chili each year,” Lanier says), the pork sausage and the sweet corn, which is a special type called Mirai.

“A local farmer buys the seeds and grows it mostly for us,” Lanier says.

Last year they bought almost 5,000 ears that were cleaned, roasted, cut up and vacuum packed in freezer storage to have over the winter. Similar process/vacuum-pack/freeze strategies are used to secure extended supplies of bell peppers, Sonora chilies and tomatoes (which are pureed for use in various sauces).

“We get tomatoes in from our farmer at the tail end of the season when they’ve got a lot of wonderful flavors going on,” Loco says.

There is enough freezer storage—including two walk-ins—for about eight months worth of product.

An onsite garden supplies the kitchen with herbs and some exotic produce such as edible flowers and watermelon radishes.

The kitchen behind the Lobby Grille also accommodates patient dining, which is based on a room service model. The hospital has 65 beds with an average daily in-patient census of around 40.

Patients can order off the same menu as retail customers, minus any diet restrictions imposed by their physicians, between 7 a.m. and 6:30 p.m. Meal orders are taken by staff using tablet computers for order entry before each meal period, but patients are also free to call down between meals.

Connecting Farms to Hospitals in the Northeast
Jan 12, 2015