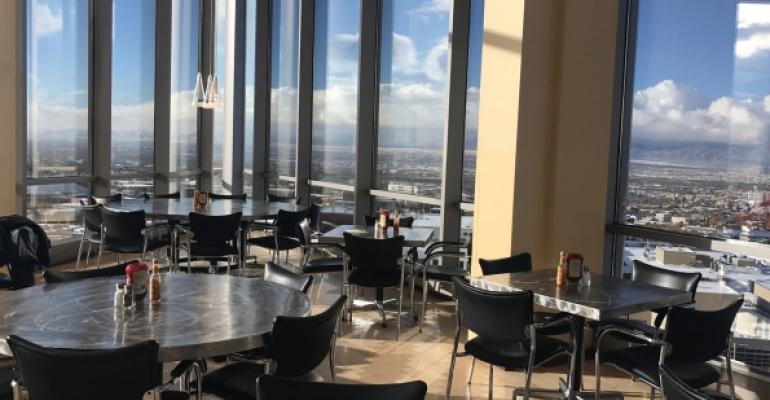 Hospital’s cafe is a room with a view

The Point restaurant at the Huntsville Cancer Institute offers staff and visitors not only excellent food at reasonable prices, but a spectacular ambiance as well.

On a clear day you can see forever—or at least a lot of Salt Lake City—from the windows of the Point restaurant atop the Huntsman Cancer Institute (HCI), which is the highest man-made point in the city.

HCI, part of the University of Utah Health Care system, has two dining operations on that level, the building’s sixth floor. The other venue, the Sheila S. and David P. Gardner Bistro, just doesn’t have quite the same view as the Point.

What it does have is longer hours. While the Point serves only breakfast and lunch—it’s open from 7 a.m. to 2 p.m. weekdays—the Bistro serves up to 9 p.m. and is also open weekends from 11 a.m. to 7 p.m.

The Point doesn’t serve dinner because there isn’t enough traffic at night to support the operation, says Alyson Harding, director of patient support services. “After about six o’clock a lot of the employees are done with their workday and we don’t need two restaurants open at that time,” she says. However, she adds, “both are very busy at lunch.”

The twin eateries provide HCI staff, visitors and even some patients with enviable dining options. The Point offers freshly prepared salads, including daily salad specials, as well as Mexican dishes, entrees off a chef’s station and a grill, plus selections from a local guest restaurant’s menu. A recent week featured local Asian, Greek and Indian restaurants preparing their fare. The Point also includes a Starbucks branded coffee station.

The Bistro, meanwhile, has a salad bar and grab-and-go selections as well as freshly made pizza, burgers, entrees, panini sandwiches and a potato bar. The two eateries each offer two distinct soups daily.

Patient dining for the 100-bed facility is handled out of the Bistro’s production kitchen. The two restaurants operate separate production operations and almost totally distinct menus though they are adjacent on the same floor.

The patient menus are customized to the needs of different diets. However, while some patients require specialized eating regimens such as liquid diets, many suffer from loss of appetite due to the treatment they receive, so “frankly, a lot of our patients’ doctors just want them to eat,” Harding says. “So if they want to order a steak or whatever they can eat, we encourage them. They can order off the menu or request something else.”

Patient room service starts at 7 a.m. and extends to 9 p.m., an unusually late hour for hospital room service, but “since we have people in the Bistro cleaning up anyway up to that time, we thought we might as well keep the kitchen open so that if patients want something [that late] they can still get it.”

They are certainly doing something right as HCI has been in the 99th percentile in Press Ganey’s patient satisfaction survey scores every quarter for the past three years, Harding proudly notes.

The Bistro and its patient meal operation debuted in 2004 when the Cancer Hospital opened, bringing in-patients to the site for the first time. The HCI, along with the Point restaurant, had opened five years earlier as a cancer research facility.