Unidine at New Milford Hospital launched a meal order program with curbside pickup that lets the hospital dining program add some of the external business it lost when coronavirus forced it to bar visitors.

The cafeteria at New Milford Hospital in Connecticut has traditionally enjoyed a robust street business with members of the community—especially the elderly—congregating in the eatery to enjoy its fresh, healthy, scratch-prepared—and economically priced—offerings along with the socialization opportunities. Well, the coronavirus pandemic put at least a temporary end to that as the hospital had to bar outsiders from the premises unless they were coming for medical services.

To help make up for the resulting loss of retail business and to provide at least some of the service it had previously extended to the community, New Milford Hospital and its dining services management partner Unidine in mid-September launched OrderIn, a remote order/curbside meal pickup service.

Related: How onsite dining met the coronavirus challenge with innovation 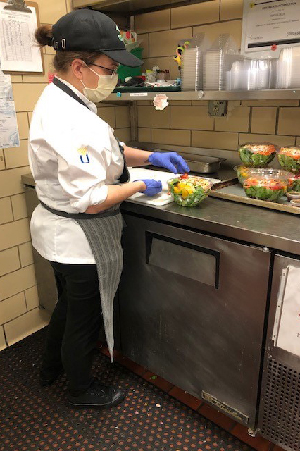 Photo: OrderIn meals are phoned in, then prepared fresh in the new Milford Hospital kitchen.

“It’s pretty simple,” explains Anthony Pacchioni, district manager for Unidine’s Healthcare Culinary Group. “You call the number and place your order, which will be ready in 30 minutes. You then just pull up at one of the six designated spots marked ‘Foodservice Pickup’ and call in to let us know you’re there; a dining representative then delivers the order to your car. We have a wireless credit card reader that takes payment, or you have the option to pay cash.”

The idea, initiated by Site Director/Executive Chef Kerry Gold back in July, was necessitated by the barring of visitors that forced changes in the hospital’s retail dining program. By that point, the dining team had already put in place some initiatives to better serve the in-house customers, such as enhancing the Fresh & Good grab-and-go program, launching an onsite micro market selling grocery essentials and debuting a family-meals-to-go program that lets hospital staff preorder prepared meals for four to eight people.

But that still left the community.

“The New Milford Hospital has always been a dining destination for the community,” Pacchioni notes. “People would jokingly say that we’re the best restaurant in town, but when COVID hit, it all just stopped. So we really needed a way to engage the community and support the seniors who had been supporting our program from the start.” 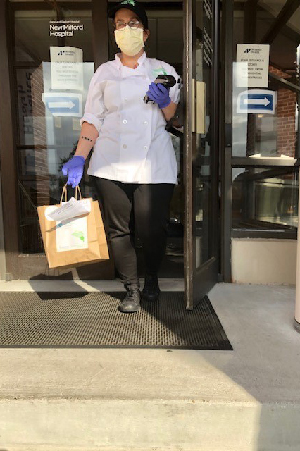 Photo: The orders are ready within 30 minutes and brought out to curbside when the customers calls to say they have arrived.

The dining team started by creating a separate restaurant-style menu for external OrderIn customers. “We’d never done anything like that before and a lot of thought went into that as far as logistics and execution,” Pacchioni explains. “One of the biggest pieces was the marketing piece and the Unidine marketing team turned it around in 30 days.”

Promotion for OrderIn included external signage, an email blast to the community and postcards sent by the hospital foundation to its mailing list, but perhaps the most impactful effort came because the hospital had already been delivering to the local fire and police departments and the mayor’s office, “so we got a lot of feedback there,” Pacchioni laughs. “The mayor actually contacted us and did a video blog to promote the order-in. I heard he has like 20,000 followers, so we should get some traffic through that, which would be fantastic.”

OrderIn officially launched on Sept. 14 and is available 11 a.m. to 6 p.m. Monday through Friday. There is no minimum order. Traffic had been running at about two dozen orders a day, though the day Food Management spoke with Pacchioni, he said the previous day saw a new high of 38.

To do production, the individual who had previously manned the action station in the cafeteria was assigned to produce for the curbside program from a special station in the kitchen complete with phone and ticket system. Pacchioni says there is little difference in the production protocols except that instead of the scratch-made food being handed to a customer in the servery, it is now packaged and taken out to a car.

He describes the menu as a “seasonal restaurant-style menu with great variety” including daily soup, sandwich and salad specials. Sandwiches can be built to order and there are also grill items, paninis, pasta dishes, entrees and housemade dessert specials. 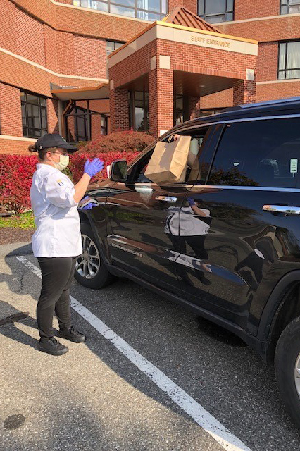 Photo: The meal is then given to the customer all packaged up and ready to eat.

Especially popular items so far have included a Thanksgiving sandwich featuring house-roasted turkey with herb stuffing, sweet potato and cranberry mayo as well as the pan-seared salmon entrée and the rigatoni Bolognese, made with chicken instead of the traditional veal and beef for a healthier nutritional profile.

A special adjunct of OrderIn is an adaptation of New Milford Hospital’s Senior Suppers initiative, which was started in 2009 to give local seniors an opportunity to get together and enjoy a good, healthy meal. It offered a seasonal weekly menu with two entrée options, starch, vegetable, and choice of soup or dessert for $5.

“It was never designed to be takeout,” Pacchioni says, but now, with COVID restrictions in place, especially for seniors, Senior Suppers has been modified to offer curbside pickup same as OrderIn, and both are integrated with New Milford Hospital’s Plow to Plate healthy eating initiative.

“Plow to Plate was developed originally in response to upward trends in obesity and related diseases, and it advocates healthy food as a direct path to disease prevention while promoting the local farm community,” Pacchioni explains. “It was really born from the work of New Milford Hospital executives along with physicians, farmers and town officials in collaboration with Unidine. It’s scratch cooking with a focus on whole foods—we don’t use any processed foods and there are no fried foods on our menu and the majority of the produce you’re seeing on our menus is procured through our local farm partners. The turkey and roast beef are made fresh in-house and all the dressings are made from scratch.”