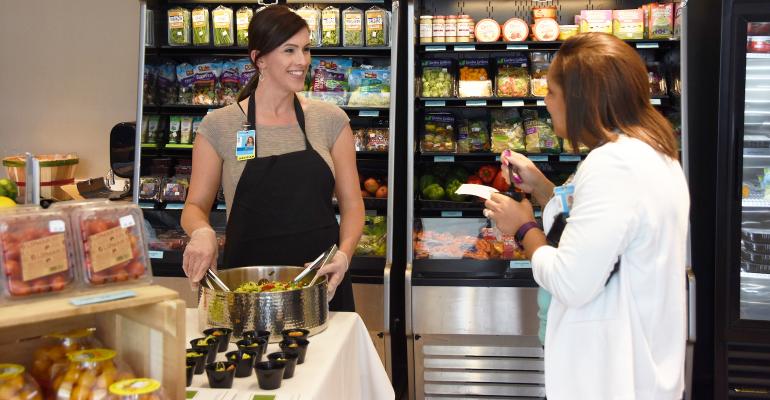 Eskenazi Health gives staff and community members a convenient source of fresh ingredients along with education on how to make them into nutritious meals.

The Fresh For You Market at Eskenazi Health in Indianapolis is more than just an onsite grocery store where staff and visitors can pick up fresh produce, dried beans, healthful cooking oils and other items from which to compose a nutritious meal. It is also a sign of the commitment the hospital has to encouraging healthy behaviors among a population coping with numerous obstacles to healthy dining.

“Our goal is to get people to cook at home, but to do that, we have to provide them with access to fresh, healthy ingredients and that’s something that unfortunately a lot of the population that we serve doesn’t have access to at grocery stores,” explains Seth Grant, associate director of culinary services & business operations for Eskenazi.

“We rotate the items offered [at the store] based on the meal plans and recipes [the outpatient nutrition team] is developing,” Grant says.

The store puts on cooking demos several times a month showing how to prepare recipes that are provided to attendees and for which the market carries the ingredients.

“We have one [demo session] that’s set every other Wednesday that’s getting quite a following in which [a member of the outpatient nutrition team] demonstrates a recipe and we provide the recipe as well as make sure we have the ingredients for it,” Grant notes.

The recipes tend to be based on themes, explains Amy Carter, director of outpatient nutrition.

“The last one we did was meals you can make in 30 minutes or less, so we demoed a new potato with some seasonings that could be microwaved or roasted,” she notes. “As people get ready for going back to school, we’ll be preparing one on healthier items you can put in a lunchbox, like veggie wraps that could be sent to school with children taken to work by parents.”

The recipes are generally simple, needing only a handful of ingredients—the general goal is five or less, though that may vary—to minimize preparation complexity and shopping needs. “And they should have as many fresh items as possible,” Carter adds.

She is happy to note that items like beet and zucchini noodles have actually sold well. In fact, one of the first recipes featured was a zucchini noodle-based pasta salad “and people loved it—they had no idea it wasn’t pasta” when it was first sampled, Carter recalls. “While we were clear it wasn’t pasta [when we were smapling it] it was interesting to see that when people got the opportunity to taste it and then see how to prepare it, [they realized] that it was truly something they could make at home.”

The demos can draw several hundred over the course of a couple hours, with people wandering in and trying the samples of the dish being demonstrated.

“We have a pretty good following of probably 150 to 200 people who come through each week based on the number of samples we’ve giving away,” Carter offers.

What helps enormously is the store’s location, as it is directly attached to Eskenazi’s main dining venue, Ingram Micro Mobility Marketplace, with its hands-on culinary atmosphere.

“We like to think of [Ingram] as a kitchen with cash registers because there’s so much cooking in that space,” Grant quips. “It’s not a traditional cafeteria where we’re just putting food on plates that was prepared elsewhere. A lot of what we do in there is action station related, cooking in front of the customer.” The Food Network-ish activities customers see in Ingram would naturally motivate some to check out the recipes being demonstrated in Fresh For You Market and perhaps pick up the ingredients to try it themselves at home, Grant theorizes. Certainly, the café’s presence and the crowds it draws help draw traffic to the market just by sheer proximity.

The recipe demonstrations also serve to promote products the store is carrying that are lagging in sales. “We usually notice that a product sells real well after we’ve completed a demo using it, so I believe it is helping people try new produce like the zucchini and squash that they don’t normally eat,” Carter says.

“One of the things that we’ve really tried to do—with the produce in particular—is to recognize folks have different levels of experience in the kitchen,” adds Grant, “so we sell some further processed vegetables like the zucchini noodles and vegetable kebab and salad kits [for those with minimal kitchen experience], but we’ve also got a decent balance of whole raw vegetables for those who are prepared to take that next step and utilize a knife and cut the vegetables.”

That means satisfying different grade levels, almost like at a school. “To be honest, some of these folks have never cooked before in their lives so it’s a new experience for them,” Grant says. “So, we’re trying to teach these people the basics, but then we have another set of people who I would say are beyond the basics, so we’re trying to cater to them as well and make sure we have whole produce for them to select from.”

Unlike the typical onsite c-store that carries a lot of packaged snacks, beverages and convenience items, the 450-square-foot Fresh For You Market specializes in ingredients designed to serve as meal components, along with some prepared items like hummus, pico de gallo and salsas. It also carries an array of minimally priced basic cooking utensils and cutting boards in recognition of the fact that some customers wishing to try their hand at cooking at home may not even have the basic tools.

Fresh For You Market was originally open the same hours as Ingram—6 a.m. to 2 a.m. daily—but that was recently extended to 24 hours during the week to serve overnight populations like police and ambulance crews who regularly are on the premises in the wee hours of the night.

Also, Eskenazi is within walking distance of two other healthcare campuses in downtown Indianapolis, “and we see a significant number of their employees coming to our operation both at night and during the day,” Grant explains, noting that both of those nearby healthcare campuses close their foodservice by mid-afternoon.

Keeping the café and grocery open overnight is made more feasible by the fact that labor can be leveraged over both operations as they are adjoining, and also by the fact that Eskenazi’s kitchen often operates overnight to prepare some 5,000 meals a month for a Meals on Wheels client. That necessitates the presence of a supervisor to oversee that operation and so “I might as well go ahead and have my [retail] operations open as well,” Grant says.

And of course, the overnight production crew represents an additional potential customer base for both the café and the grocery. Since the café and grocery expanded to round-the-clock service, customer counts in the formerly shuttered 2 a.m. to 6 a.m. window have been averaging over 150 transactions, certainly making it viable, if not spectacularly profitable.

But then, the Fresh For You Market is not meant to be a profit center, and pricing is kept as low as possible to aid customers on fixed incomes in getting fresh products. That’s helped by using the hospital’s kitchen’s considerable buying clout with vendors but even at that, “at best, we hope to break even,” Grant says. “Honestly, we’re subsidizing a lot of what we do [at Fresh For You Market] because it ties in well with our mission and really something we’re driven to.”