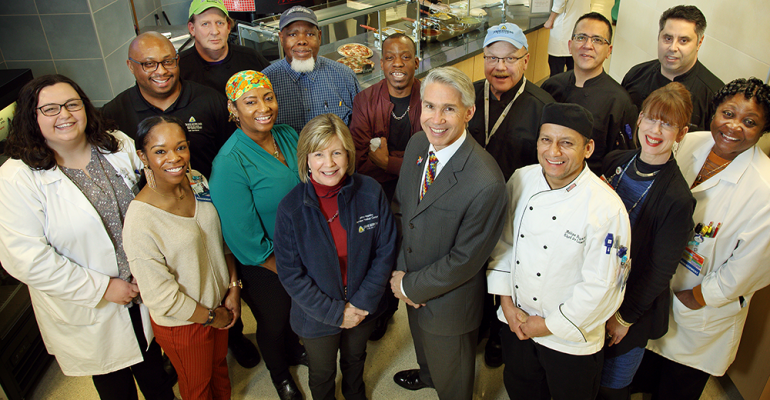 A new food court offers plenty of options, from composed salads to pizza, including meatless options every day at each station.

The multistation retail café in the Johns Hopkins Bayview Medical Center complex in Baltimore not only features seven modern cuisine stations emphasizing customization and to-order preparation, but they also promote healthy and plant-based dining through both the menu approach and the pricing structure.

Healthy dining is encouraged by offering discounts based on the meal components chosen by customers while plant-based dining goes beyond the “Meatless Monday” approach of single-day promotion to a “meatless every day” model, in the words of Angelo Mojica, senior director of nutrition & culinary services for the Hopkins Health system.

“There’s at least one plant-based option at each station every day,” he explains.

For instance, the Italian cuisine station, called Rocco’s Pizza, where customers can create not only their own pies but also their own pasta dishes, always offers at least one vegan sauce option as well as a choice of regular, high-protein and whole-wheat pasta. 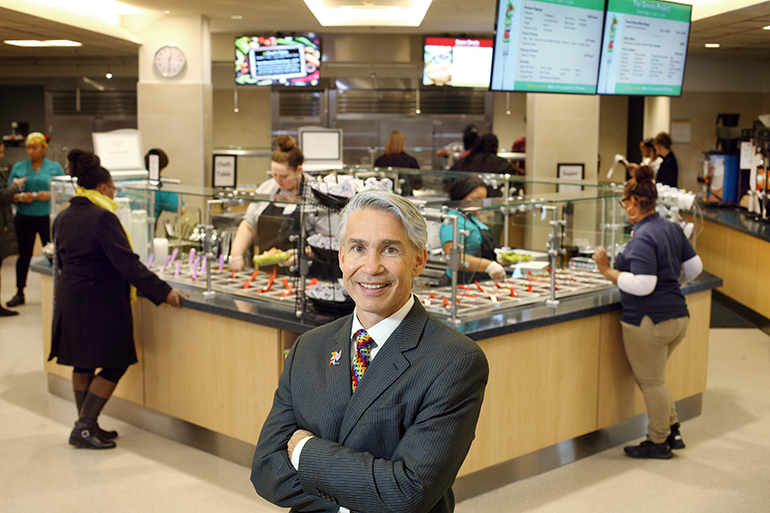 The station’s pizzas, meanwhile, are baked in what Mojica says is the first Marra Forni pizza oven in a healthcare venue. The units are capable of temperatures up to a thousand degrees Fahrenheit, Mojica notes.

“It has a kind of lazy Susan inside that spins a pizza around 360 degrees in one rotation in 90 seconds, so we can make a 10- to 12-inch pie to your specs in a minute and a half,” he explains.

Customization is the order of the day at this station as at most others in the café, not only to allow diners to create their own dishes but also make ingredient decisions that trigger discounts. For instance, choosing whole-wheat crust over standard for a pizza earns a discount on the price. The same with the cheese choice, where the option is either the traditional shredded mozzarella or fresh mozzarella, with the latter accruing the discount—though not if the customer then chooses to add a less healthy item like bacon as a topping.

“You can build it however you want, but if you build it the right way you save more money,” Mojica summarizes. “We try to help people make good choices by not making it an all or nothing proposition.”

The composed salad station, Greens Project, is of course a relatively easy fit into the goal to offer at least one vegan option a day. Other than its array of plant-based ingredient choices it offers baked tofu as a vegan protein.

Greens Project is also a healthy choice dining discount hot spot, as choosing from here automatically qualifies for a 20% discount. “We’re applying a discount just because you got a salad,” Mojica quips.

A meatless “chicken” product called Chick’n is a popular component in vegan dishes at Bayview, such as this vegan Chick'n salad sandwich from the AJ’s Deli station. Each station offers at least one vegan option daily.

The station is not a self-serve salad bar but build-to-order salad station where staff assemble the components customers choose. Even the station’s soups are served out by staff rather than self-served: “As long as I live I’ll never let people serve their own soups if I have any control over it!” Mojica declares.

The previous version of Bayview’s retail dining operation had featured a traditional self-serve salad bar and some of the staff worried that customers may not like having to cede control in the new format, but that has turned out to be a non-issue, Mojica says, noting that “there wasn’t one complaint, in part because of greater choice—we went from about 20 toppings to about 70—and also because it’s [more sanitary] and it looks great.”

The Super Bowl station has a weekly rotation of five bowl concepts—Mexican, Indian, Mediterranean, American and Korean—with three others— Cajun, noodle and Latin—in the planning stages. This station includes a daily value option that offers a starch (usually a rice) and a bean plus one topping for $3. For instance, the Indian themed option has a choice of white or brown rice, chickpeas and topping options like tikka masala chicken breast, tandoori chicken thigh and curry shrimp.

“We figured that if you have a starch and a bean and you fill a bowl with those, it’s a really healthy, filling item, especially if you then you top it with a bunch of vegetables,” Mojica explains. Providing a vegan option here is fairly simple, given all the plant-based topping options.

The Chef’s Table station offers composed healthy choice meals—for example, grilled salmon with asparagus, roasted potatoes, fresh fruit and a dinner roll—defined by specific calorie, fat, saturated fat and sodium counts that automatically qualify the dishes for the healthy choice discount. Because the combination of items for each dish is specifically designed to meet the station’s nutritional targets—each combination is less than 700 calories, for example—this is the only station where there is no customization option nor the choice of getting only certain individual components.

Rounding out the station mix are AJ’s Deli, Lemongrass—a pan Asian concept offering to-order stir-fries and freshly rolled sushi—and Prime Grill, with build-to-order burgers, including a homemade vegan black bean burger, as well as a grilled portabella mushroom option and grilled chicken or salmon. The beef burgers are 6-ounce patties from specialty supplier Pat LaFrieda Meats, and all the burgers are customizable with a choice of healthy-dining-discount-eligible wheat or white and toppings like fried egg, guacamole and sautéed onions and peppers.

Instead of french fries—there are no deep fryers to make them—there is a baked potato hash.

The Bayview café is open round the clock, though after 7:30 p.m. only the grill and a well-stocked grab-and-go section—including sushi—are operative.

Breakfast is served from the salad station, where “Sunrise Selections,” such as bagels with housemade cream cheese, build-you-own yogurt bowls and omelets, as well as traditional choices like pancakes and French toast, are available.