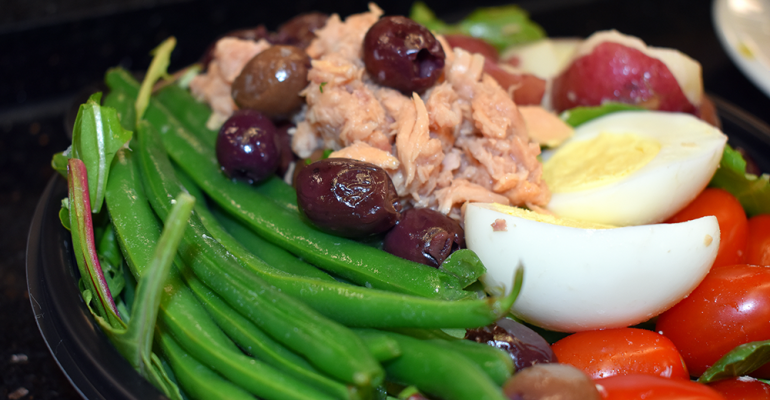 After streamlining its systems and re-thinking “hospital food,” UCHealth in Northern Colorado wins fans for its restaurant-style meals.

In two northern Colorado communities, people in search of a good meal can drop into one of the UCHealth facilities and get a restaurant-style, made-to-order meal.

At Poudre Valley Hospital and Harmony Campus in Fort Collins and at the Medical Center of the Rockies in Loveland, visitors might choose from carved ham and sweet potatoes, an orange chicken wrap and shrimp etouffée. Or potato-crusted cod, a nicoise salad with tuna and a pork tortilla. Patients might order a hot turkey sandwich smothered with gravy, a strawberry spinach salad or a veggie hummus pita sandwich.

Seasonal menus and build-your-own entrées give visitors and patients a bounty of options. Build-your-own omelets and pizzas are especially popular.

UCHealth's director of hospitality in northern Colorado, Liz Hollowell, says the foodservice team is changing the quality of its meals, but also the perception of “hospital food.” 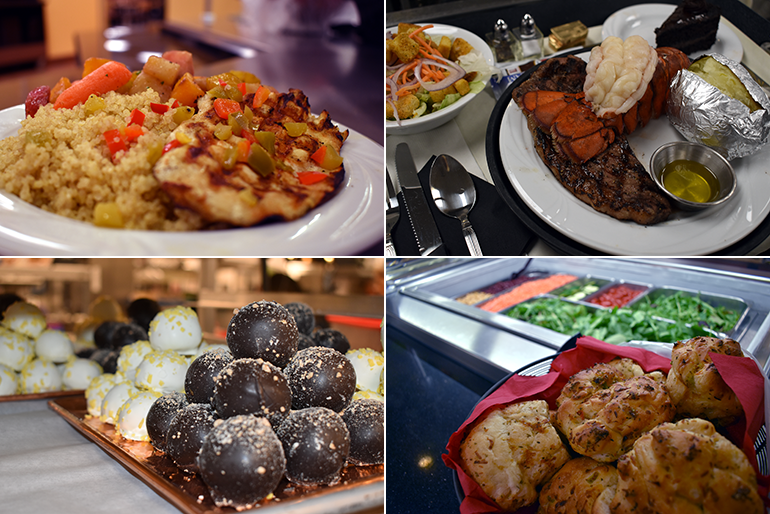 They combat bad optics by refusing to serve green Jell-O. They got rid of their deep-fat fryer. And they highlight their baked goods, which are made by a resident baker who has been making rolls, cookies and his signature lemon torte on site for 25 years.

They also have a special menu for new parents. The surf-and-turf “Just-Had-a-Baby Bistro” meal features steak and lobster tail. (New grandparents can even opt in for a fee.) They also serve the decadent meal on special occasions, such as a significant anniversary or to celebrate when a patient completes chemotherapy treatment

These are some of the end deliverables of a program that has been changing for a number of years.

Hollowell, who has worked at the facility for 14 years, says they made a big shift in the late ’90s when they moved from an institutional food system to room service for patients.

Before the change, “people had to pick what they wanted to eat the day before,” she says. “No one does that. We want all our patients to be able to order what they want.”

The staff of 160 serves about 7,000 meals per day across the three facilities. To deliver so many meals, they updated their system three years ago to help facilitate bedside meal orders for patients and to ensure they receive their meals hot.

Patients who are unable to use the phone can order through hospital tablets, with personal help from staff. The software allows staff to indicate a patient’s condition, which makes appropriate food choices clickable and grays out options that are not diet-compliant. 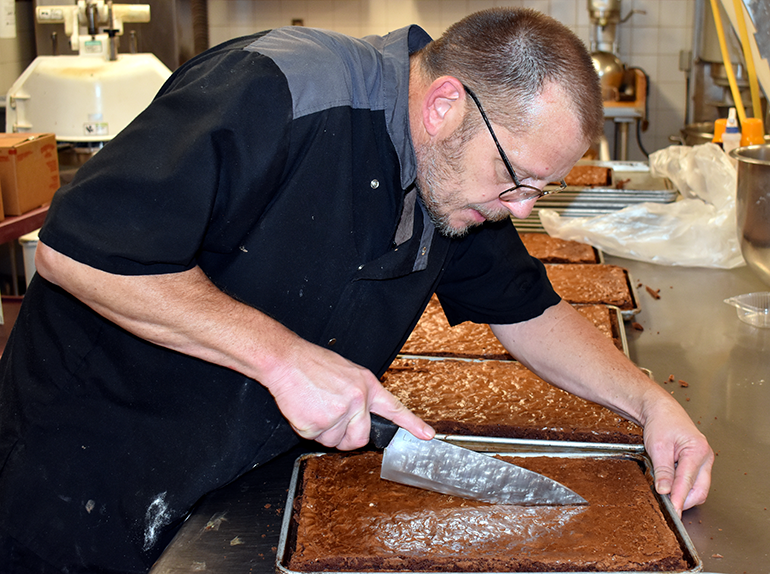 A Poudre Valley Hospital staffer cuts into some fresh-baked brownies.

Hollowell says a big part of their training program was to develop scripts for assistants and phone staff that encourage patient autonomy and positive framing of meal choices.

To deliver meals quickly and at the right temperature, they made two major changes.

They replaced their long, U-shaped prep line with a short, straight one, which helps keep meals hot. They also invested in cold counters for sandwich preparation and carts for delivering meals to patient rooms. 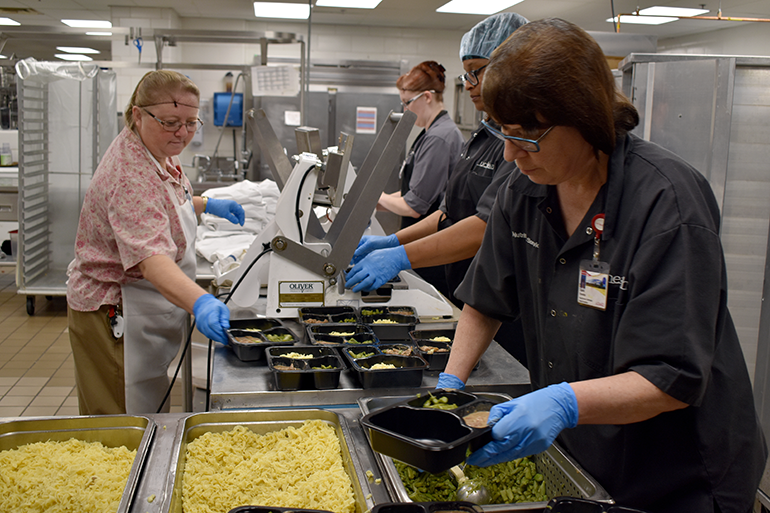 Meals on wheels are prepared at Poudre Valley Hospital.

They also changed the timing of their meal delivery system to keep meals from sitting too long. Once the first tray reaches the cart, it goes up seven minutes later, whether it’s full or not.

“If the seven-minute timer goes off and there’s only one tray on the cart, it has to go,” Hollowell explains. Once a cart is full, she adds, they send it up immediately.

They also extended their hours, she says. Made-to-order patient meals are available from 6:30 a.m. to 9:00 p.m. Eventually, they would like to offer late-night hot meals, especially for new parents, “so they can have something other than a cold sandwich.”

To help transition the staff, they took employees to observe in restaurant kitchens. Many new staff members have experience on restaurant lines.

In November, they hired someone from the restaurant world, Billy Charters, as the new executive chef of the joint dining programs. He was immediately impressed with the program.

“These are the kinds of meals you’d expect to see on a restaurant menu, not in a hospital,” he says. “The quality of the food and the quality of the staff is a level above what I expected.”

To keep choices interesting, Holloway, Charters and their team develop five-week seasonal menu cycles for the cafeteria and two seasonal menus (spring/summer and fall/winter) for patients.

They also cook with local ingredients whenever they can. Their vendor, US Foods, sometimes supplies enough local cantaloupe, corn or zucchini for the facilities. Last summer, Hollowell says they made Colorado peaches into cobbler and even grilled some for an entrée. 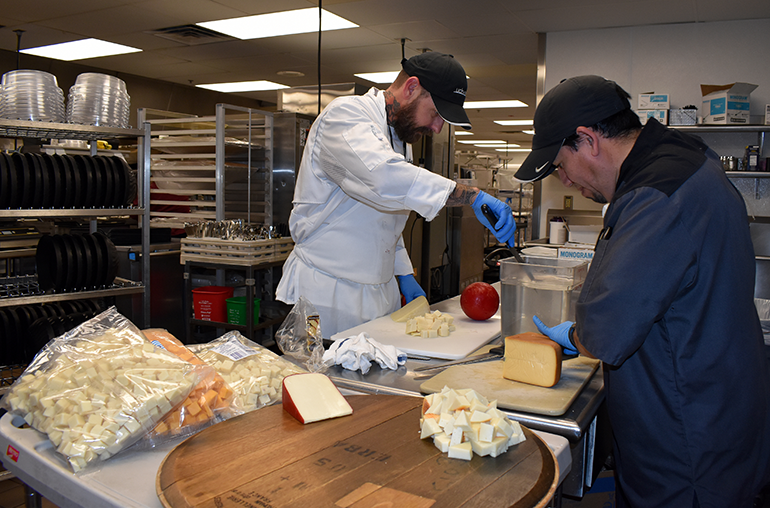 Preparing for a catering event at Poudre Valley Hospital.