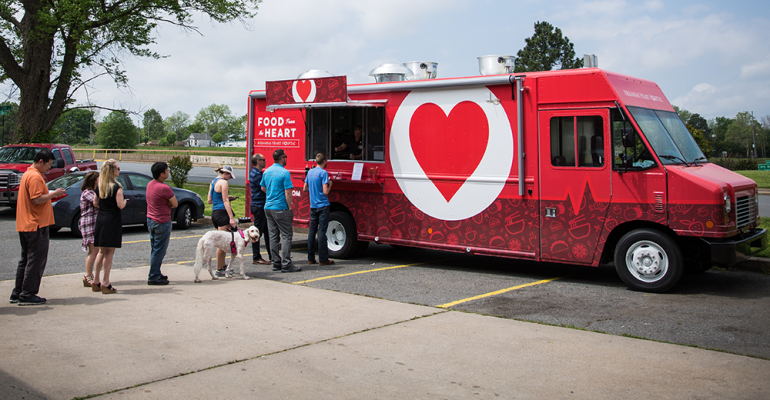 Last month, Arkansas Heart Hospital and its chef, Coby Smith, launched Food From the Heart, a bright red food truck making stops all over Arkansas. The truck features the hospital’s café’s authentic Japanese ramen, a fare so unexpected and popular that it recently landed Smith and the hospital a spot on national TV news.

“Honestly our ramen had gotten so successful, we needed another outlet for it,” says Smith of the motivation behind the food truck. “I did a little research and couldn’t find any other hospital in the country that operated a food truck. I thought it would be a great way to get our food and message to people.” The food truck is just the latest bold move in foodservice for the hospital, a 110-bed facility in Little Rock centered on the prevention, diagnosis and treatment of cardiovascular disease. While the hospital café was being renovated, the hospital’s CEO sent Smith to Tokyo for a week to visit 40 ramen shops and speak with their chefs. Smith then developed the recipe for a pork-base broth that takes 16 hours to make. Next, he adds a Southern twist with ingredients such as andouille sausage, seared scallops, jumbo lump crabmeat, crawfish and house-cured pork belly.

Smith’s ramen quickly became so popular that people would drive 30 miles for it and there was standing-room-only in the café. Thanks to the new food truck, Smith’s coveted ramen can now be enjoyed across Arkansas. “Every time we do a public event with the truck, we’re going to serve ramen – it has too much of a following,” says Smith. “If I showed up somewhere and didn’t have ramen, people would be upset with me.”

While the ramen’s reputation drives interest in the truck, other fare is served as well. “We also do fresh salads with what we harvest in our garden – lettuce, blueberries, strawberries – whatever is in season,” says Smith. “We also do roasted vegetables and grilled organic chicken. Although people complain when I serve chicken, so I try to keep options fresh and exciting.”

Food From the Heart made its first stop May 2nd at the Food Truck Stop in Little Rock with lunch from 11 a.m. to 1 p.m. Smith says when he takes the truck through small towns – many of which have never seen a food truck before – they get waved down and asked to come back and serve lunch.

In addition to stops for the general public, Food From the Heart will also provide outreach to Arkansas Heart Hospital’s close to 40 clinics throughout the state. “We hope to use Food From the Heart to serve lunch to clinic employees as a thank you,” says Smith who took the truck to seven clinics just last week. In addition to taking the food truck to serve lunch at private and public stops an average of three days a week, Smith says he and his team hope to use the truck for disaster relief. “Good community outreach is particularly important to me,” says Smith. “We’ve been talking to FEMA because I’d love to partner with our food distributor to help feed affected areas when needed.”

For Smith, who claims no prior food truck experience, launching the food truck has been a success both in reception and execution. As an example, he arrives at the hospital at 6 a.m. before departing at 9 a.m. for a food truck lunch in Hot Springs, Ark., an hour’s drive away. He’s back at the hospital at 1 p.m. in order to start prep on the following day’s ramen menu.

“The biggest challenge so far has been the heat. It’s incredibly hot in the truck,” says Smith, adding that the food truck team usually consist of three staff inside to cook and a few outside to run the register. “Pulling this off takes a team because there’s a lot of delegation and trust involved. And I have a heck of a team.”