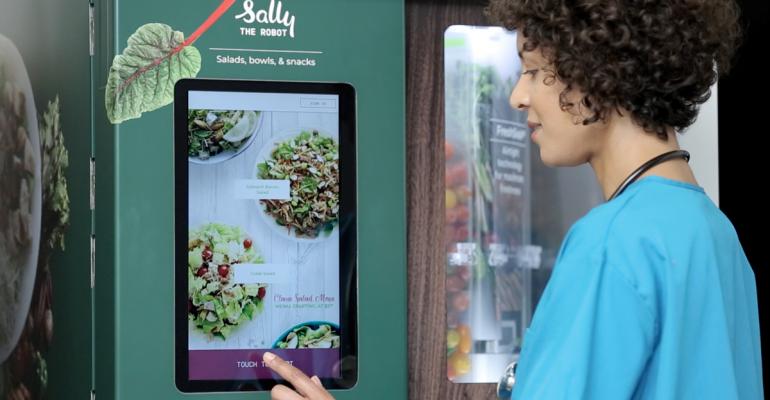 The lower-level cafeteria at Carle Foundation Hospital is currently closed for remodeling. But customers can still get fresh, custom salads nearby from Sally the Robot, a robotic vending machine that can churn out made-to-order salads quickly and efficiently.

Sally made her debut at Carle in early November, though plans to bring her to campus had been in the works for some time. "The pandemic hit and we were in the middle of our remodel in our main dining space, and the question came up of whether we'd put a self-serve salad bar back in," says Kevin Steffes, Carle Health Director of Food and Nutrition. "We thought Sally would be the perfect way to provide self-serve, made-to-order salads for folks and not require as much labor." (While the main dining space is under construction, customers can still get hot, made-to-order food at Carle's North Side Cafe, which was remodeled a few years earlier.)

Steffes opted to put a second Sally at the South Clinic coffee bar on the other side of Carle's Urbana, Illinois campus, since that area had been lacking in fresh food options.

Sally, a product of Chowbiotics by DoorDash, has 22 refrigerated canisters filled with a variety of fresh salad ingredients like leafy greens, fresh vegetables, diced eggs, chicken, shredded cheese, and salad dressings. Next to the compartments is a touchscreen where customers can choose from five pre-set base salads (developed by Chowbiotics) or choose a custom mix of ingredients. The salads are assembled in individual disposable bowls, and then it's time to eat.

It takes Sally just one to two minutes to make a salad. It takes some customers a bit longer to get the hang of ordering from the touchscreen, but the pace quickly picks up. "The longest delay we've seen is people learning how to navigate the tablet and make their choices. But now we have some folks order from the robot four times a week, and it's like boom boom boom," Steffes says. Customers can also place orders ahead of time via an app. "They can flash their QR code and Sally will start making the salad for them," he explains.

Foodservice employees make sure Sally's ingredient canisters are stocked before 10:00 AM, and they typically don't have to replenish anything until the lunch rush ends around 2:30. "We can get through that period without having to restock. But we may get a notification that Sally has moved on to a backup canister," Steffes says.

Together, the two robots average around 100 sales per day, Monday through Friday. "My expectations were that, if we did more than 50 a day I would have been happy," says Steffes. The 10:00 AM to 2:00 PM lunch rush is the busiest part of the day, with a second wave between 8:00 PM and 2:00 AM. "We see another spike with the late night staff as well," Steffes says. Hospital staff make up the bulk of Sally's customer base for now, but Steffe attributes much of that to current pandemic restrictions. "Visitors aren't as present right now. But when they do find the robot, they utilize it," he says.

Steffes plans to move both robots to the remodeled cafeteria when it reopens within the next month, but the decision isn't set in stone. If two robots side-by-side weren't getting enough business, he'd put one back in the South Clinic coffee bar. ("Or if it proves really popular in South Clinic, that would be the first location I'd think about putting an additional Sally," he says.)

Salads in the remodeled cafeteria won't only be available by robot though. "We'll man a station where we can make salads to order, but that will only be available during peak periods," says Steffes. "This provides a fresh salad option 24/7."

And with staffing shortages affecting Carle just like other foodservice operations across the country, having automated service is a big help. "I could put two Sally robots out and not have anybody man a salad station, and I think we could get a decent number of folks through the operation," Steffes explains. That said, trading employees for robots isn't the goal. "While I might not have eliminated labor, I've repurposed it to a more customer-facing role, or I will be able to in the remodeled space," he says.