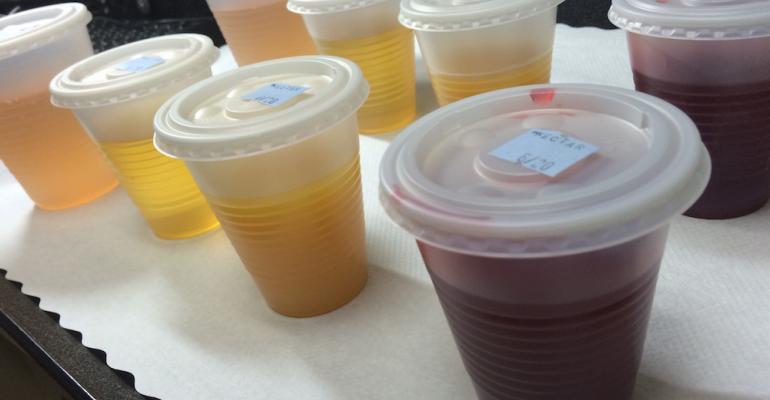 At Amsterdam Nursing Home in New York City, residents with dysphagia often suffered a lack of enjoyment as well as reduced sense of dignity and independence during meal times due to their need for thickened liquids. This was because they generally had to wait while an aide mixed a thickener into their soup or beverage while other residents dove into their meals.

The delays often translated into impatient residents risking their health and eating before their meals were modified or, for those that waited, finding an unappetizing, lumpy result that led to them not eating.

For Howard Rosenberg, director of foodservices, these risks of aspiration or malnutrition were major calls to action, which eventually led to several operational changes designed to increase fluid intake of residents with swallowing difficulties; restore resident dignity, quality of life and desire to enjoy mealtime; and re-establish a personal level of independence during meal service.

A key component of the new approach was serving beverages ready-to-drink through the use of a stable prethickened water or juice as the base of each recipe, thus eliminating the need to thicken liquids in front of the residents.

In addition, all beverages were poured below the top of the cup—for example, 4 ounces of juice were put in a 7-ounce cup—to minimize spillage from shaking hands, and thickened soups and various flavored broths were pre-prepared with water thickened to a honey consistency. Also, a variety of prethickened beverage flavors began to be served in each unit with snacks at the bedside and when taking medications, a change that delivered a 44 percent increase in hydration throughout the day.

“These relatively simple changes delivered significant improvements in multiple areas, including increased independence while eating—measured by fewer requests for help during each meal—a 13 percent increase in fluid intake and a 23 percent increase in caloric consumption at mealtimes,” Rosenberg says.

To prepare for the changes, the Amsterdam team had measured consumption and alternative service approaches in a variety of ways, including conducting an eight-week study of 16 residents with dysphagia. In a four-week assessment period, the staff observed that residents tried to open packages rather than wait for assistance, drank thin beverages before they were thickened or refused them altogether after watching them be thickened.

Another study of juice consumption among non-dysphagia residents compared foil-sealed plastic cups of juice, which most often require assistance to open, with juice poured into transparent cups (using the 4 ounce juice in the 7-ounce cup approach). It found that some residents used utensils to poke holes through the foil seal before waiting for assistance, but when served in a cup they could confidently hold and readily drink from, residents consumed 15 to 25 percent more juice.

The program change required a capital expense of $3,200, which was spent on a two-door reach-in refrigerator to support advanced preparation, while existing budgeted man-hours of 4.5 per day (.6 FTE) were allotted as needed to the program at an annual cost of $32,500.

“When using the original standard, packaged prethickened beverages and thickening packets, our average daily total fluid cost for a resident requiring thickened liquids was $7,” Rosenberg explains. “Through the independent tray service program, we reduced the average daily cost of fluids for a resident requiring thickened liquids by 40 percent (from $7 to $4.25 a day)—including the cost of the cup and lid. This is based on serving three meals a day, nourishment/snacks and medicine pass.”

When directly comparing costs of the old service method to the new program, Rosenberg estimates a savings of $1,000 per resident per year, or $60,000.

In addition, due to an overwhelming acceptance of the new program and residents consuming significantly more liquids—“even more than we expected, leading to even better hydration, which has been an exciting result,” Rosenberg says—Amsterdam saved some $46,000 in annual costs dealing with dehydration issues.

“With the cultural and social significance placed on mealtime in the U.S., one’s quality of life can be greatly affected by loss of enjoyment and/or independence during meal time” he concludes. “A program like Amsterdam Nursing Home’s independent tray service offers simple, measureable changes that can be implemented at any assisted or senior living facility—and even ideas that can translate to at-home care for a loved one. This initiative can improve quality of life—not to mention safety and well-being—for those with dysphagia as well as for all senior citizens.”