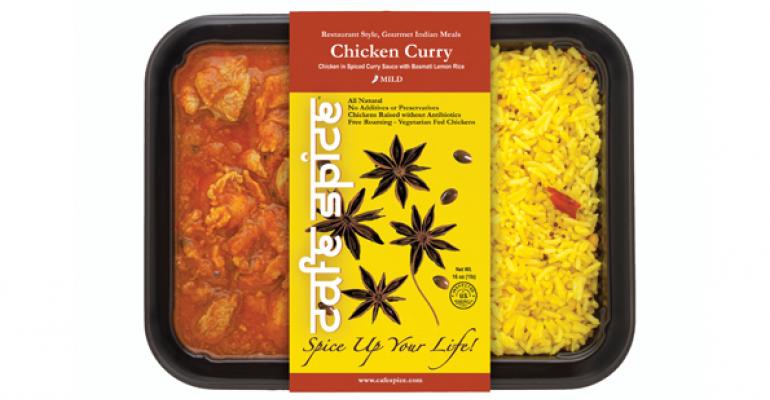 Indian Cuisine: Are Ready-Made Concepts Right for You?

Looking for an authentic Indian concept? Established vendors may be the route to recognized brands, customizable menus, and complex curries done right.

Complex, diverse, mysterious, nuanced, polarizing…Indian cuisine invites a myriad of compelling and inviting adjectives. And National Restaurant Association surveys describe it as an up-and-coming trend in this country.

Yet Indian cuisine still remains unfamiliar to many consumers and daunting to some chefs. Even chefs who can pull off classic French cuisine with their eyes closed have to take a deep breath before toasting cardamom pods. Many chefs quickly realize what they don’t know about Indian food is a lot.

“There are incremental nuances that differentiate good Indian food from bad,” says Van Sullivan, manager, Campus Center Food Services at the University of Massachusetts-Amherst. “They are not stunning, they are subtle. It’s a massive country and the food varies greatly. It’s hard to get it right and it’s easy to get it wrong.”

Add to that the desire to have a successful concept that will consistently wow customers with a cuisine that, while delicious, can be challenging to present in an inviting way…and it’s starting to get a little hot in the tandoori oven.

That’s why a number of onsite decision makers have opted to stand back and let specialists do their thing rather than tackle it on their own.

No doubt, Indian food vendors take the guesswork out of spice ratios and cooking methods. The pros of going “pre-made” in one way or another include: consistency, reduced labor costs and speed. The cons of turning to outside vendors to provide a finished product are the same that arise in any situation in which a chef turns over prep to an outsider—disconnection from what he or she is serving.

“There are chefs who are extremely well-versed in preparing world cuisine,” says Swati Elavia, president of Monsoon Kitchens, a company that sells ready-to-serve Indian food to both commercial and non-commercial accounts. “They like to add their own signature and we’ll work with them. If we’re too detailed, that’s not good. You don’t have to sell vindaloo the exact way I do.”

Chefs who know their customers can conjure up signature items that will sell. Think Indian combo meals with rice, chicken tikka wraps and spiced potato naan sandwiches that fly off the shelves.

Still, pre-made is hardly risk-free. The food can taste great, but if it’s not presented invitingly or the options aren’t right for the daypart, then the station flops.
So how does a chef/operator get Indian food “right?” FM interviewed several operators and Indian food purveyors to find out how to work with a vendor to develop tailored menus, and—in the end—introduce more customers to Indian cuisine in a way that helps them appreciate its addictive fire, mystery and flavors.

Often times, the first thing you may know for sure about your new Indian concept is the location. What’s the situation there? How much space do you have? This is where the Café Spice concept began at the University of Kansas, Lawrence, last year.

The time had come to replace an old concept in The Underground, the largest retail outlet on the KU campus. In a student survey, Indian food was voted as one of the top three types of new concepts they would like to see, just behind pizza and Asian cuisine. Since both pizza and Asian were pretty well represented at a few different venues, KU decided to delve into the world of chana masala, curries and vindaloo.

“We knew the area we were going to use for the concept didn’t have a lot of kitchen space, so it was as simple as that: we knew we wanted to outsource,” says Janna Traver, executive chef and assistant director of dining services at KU.

KU Dining met with Café Spice, a family-owned company based in New Windsor, NY, that’s in hundreds of onsite locations ranging from colleges like NYU to B&I sites like Morgan Stanley and medical centers like Hurley Medical Center in Flint, MI. The company also sells packaged meals at a few supermarkets and about 250 Whole Foods stores.

Working together with Chef Hari Nayak of Café Spice, Traver and her team embarked on a two-week training and ideation time, getting to know the product and teaching staff how to work with it.

Café Spice provides mostly frozen sauces, and KU addsfresh chicken, vegetables and rice. Training for staff in putting the components together is necessary for the concept to work.

Pre-made complete Indian meals and handmade samosas are also part of the mix at KU. The samosas are going to be used for catering as well, they’ve been such a big hit.

Traver says when working with an outside vendor like this, one thing to keep in mind is proprietary products.

“You have to use the same prime vendor stock for ingredients you’ll need. If your agreement is very restrictive, and you run out of an ingredient, then you can’t run that concept,” Traver says, adding that it helps to have a little built-in flexibility with the vendor.

Café Spice does follow up visits and even connects with individual campus communities to spread the joy of Indian fare, with Chef Hari slated to do a lecture with a culinary group on campus.

Translating  to Grab and Go

Reaching out to customers is important for any new concept to gain the lightning-in-a-bottle momentum required for success. One problem operators sometimes site as an obstacle in getting people to try Indian food is that it just looks unfamiliar.

“A lot of Indian food is basically stew,” Traver says. “It’s a challenge to make it look good and garnish it well when you’re scooping it out on a serving line.”

Pre-packaged Indian meals neatly sidestep that problem, (picture chicken tikka on top of rice in an eco-conscious to-go container) and also fit into the grab-and-go demographic of just about any busy onsite operation—college, school, B&I, you name it.

Another great solution that pops up regularly in branded Indian concepts is to use naan bread to present unfamiliar Indian flavors in a familiar way—a sandwich.

Knowing what kind of items click with your customers is a key point in determining the success of an Indian (or any) concept.

At UMass, grab and go Indian food has been the key to boosting sales at Café Spice.

The formula has been partly due to Indian food catching on also the way UMass has been presenting it.

“I don’t think ten years ago that Indian food was seen as an everyday lunch,” Sullivan says. “Our area of expertise is that we know how to put together good, convenient dishes for students,” Sullivan says.

With the brand-power of Café Spice, 250 customers per day are enjoying Indian food and Café Spice accounts for about $2,500 of sales, Sullivan says, something he attributes to the rising popularity of Indian food but also to the attractive branding and a menu that speaks to busy students rushing from class to class.

So an important part of the collaboration has been combining Café Spice’s right-on authentic flavors and pre-made products into student-friendly items like Naan Sandwiches with Tandoori Chicken, Paneer Tikka or Spiced Potato.

Wraps do well with students, so those same naan toppings are available in that form, too. There are sides of vegetables, chutneys and samosas, and entrees that resemble a quick-serve restaurant combo meal: For $8.95, a customer can choose one chicken entrée or one vegetarian entrée with rice, naan, a samosa or bhajia (look up), a vegetable or chutney and a soda. There are also rice bowls.

Many onsite operations have found that partnering with a local Indian restaurant is a win-win-win: getting authentic Indian flavors, breaking monotony for customers and building good relationships in the community.

At University of Utah Health Care, Salt Lake City, UT, different local restaurants are featured on a rotating basis every day at a dedicated station. A local Indian restaurant has been the most successful of all for about five years, according to Jay Oberst, retail services manager.

“We developed a contract and we take a percentage of their ticket,” Oberst says. “Customers look forward to it and for us, there’s no labor and no food cost.” Another way for Indian food to become a craveable concept.