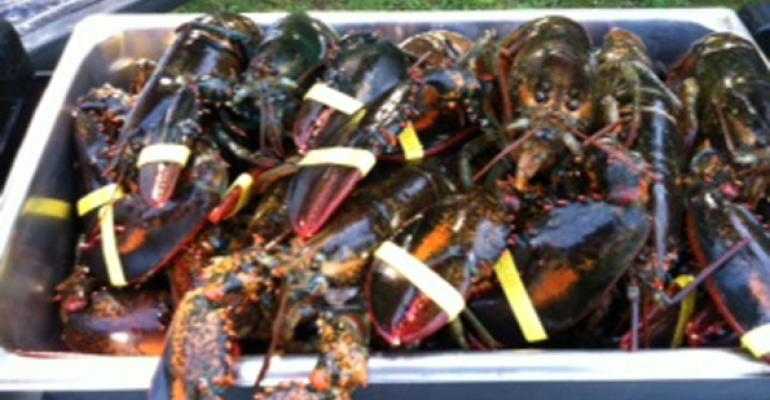 Connections with local lobstermen can be a link to great seafood (for employees to order and on both patient and retail menus) for East-Coast healthcare operations.

We’ve all heard about (and pretty much love) the idea of farm to table. Farmers markets, making the local bounty of sweet corn, tomatoes, squash and more available to employees to purchase for use at home are a fairly common site in the common areas of many hospitals.

So in New England, it’s only natural to look not just to nearby farms, but to the Atlantic Ocean as well.

Fletcher Allen Healthcare, Burlington, VT, and Brattleboro (VT) Memorial Hospital are two operations that have made a connection with lobstermen who provide employees and the hospital foodservice operation with fresh Maine lobster, just caught that morning.

Brattleboro has been having a four or five lobster sales a year for about three years.

Live lobsters and their sweet frozen meat as well as the occasional crab are a sweet deal for customers at Brattleboro Memorial. With a minimum order of two, 1 ¼ lb.-lobsters are just $6, each, a very good price, Baribeau says. Cleaned lobster meat is available in 2 lb. packs for $50, and live Maine crabs are $1.50 each. 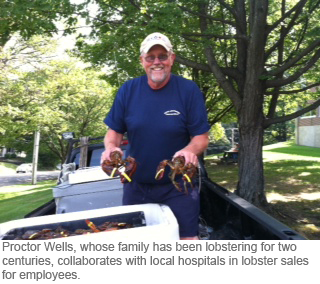 Employees make their orders on a spreadsheet prior to the four or five lobster sale days per year. They can pick up and pay for their orders between 10:30 a.m. and 1 p.m.

They must bring a cooler and ice packs, Baribeau says, also cautioning that “they have to be careful with the crabs. They’re not banded, like lobsters, and they’re a lot more feisty.”

Crustacean pinches aside, “it’s a win-win for the employees, for us and for the lobstermen, too. And there’s very little labor involvement from us.” In exchange for the promotional arrangement, the lobstermen donate seafood to be used for lucky patients and retail customers in the hospital.

Baribeau is enthusiastic about the menu items that result. “Steamed lobster with drawn butter is my favorite food,” he says. Maine Seafood Chowder with Maine lobster, shrimp and clams is on the patient menu after the sales. Lobster rolls, that classic, simple New England favorite (lightly dressed lobster salad on hot-dog-bun-like rolls, with maybe a spritz of lemon) are on both the patient and retail menus.

The setup has been working just as well at Fletcher Allen, where the Wells brothers bring lobsters to the hospital farmers market to sell to staff who have pre-ordered. More than 750 live lobsters have been sold, along with 60 lbs. of frozen meat.

After the sale, the lobstermen donate 30 lbs. of lobster meat to the hospital, “which we use for a special for patients,” Jarmusz says. “How’s that for getting a great meal to patients with a low food cost?”