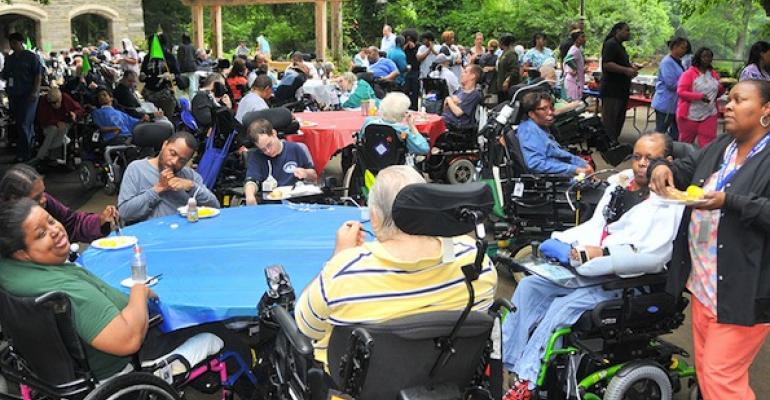 Inglis House in downtown Philadelphia supports nearly 300 residents, all in wheelchairs due to severe neurodegenerative physical disabilities resulting in paraplegia and quadriplegia. Naturally, dining in such a facility requires a specialized approach as the majority of the residents cannot feed themselves without assistance.

Beyond that is the psychological factor of being debilitated, which affects how residents approach dining. And that is why Inglis House has embarked on a major remodel program that will see the successive conversion of its congregate dining rooms into a “household model” approach that promotes “little neighborhoods” within the facility with more flexibility in dining hours and more inviting decor, says Thomas Cooley, MA, RD, who is director of dining experience for Inglis.

“We do have six dining rooms, but half the people still receive trays in their rooms at lunch and dinner when they have the option, if they are able, of coming down to the dining rooms,” Cooley explains [everyone receives a tray at breakfast because they all have to be gotten out of bed in the morning and that can’t be done quickly enough to make a dining room breakfast service practical].

“Most of the people who stay in their rooms are actually my highest functioning people,” Cooley adds. “They’re not depressed. They’re there because their co-residents require so much care and they’re so debilitated that it’s not fun for them to be in the dining room. They’d rather be working on their computers or watching TV or doing things in their room instead of being around everybody who’s receiving care and being fed by hand.”

Cooley hopes the new household model of dining will help change that. For one thing, it will allow residents to come down for the meals in a larger window so that the attendance is more spaced out. Currently, there are small daypart windows that essentially force everyone into the dining rooms at the same time.

“We are doing a pilot on one of the six units and over the next three years we’ll be doing all six of the units,” he says. “We’ve already finished our design work with our designer and architect.” One goal of the design works to make each dining area more distinctive and welcoming.

Colors, flooring, window treatments and style of service will change more than anything, he says. "Each dining room will have different colored table cloths, different china, different stations on the radio and watch different TV shows. Each is chosen by the neighborhood members. Then my team and I will try to tailor the menus to the preferences of each distinct group. There are amazing differences is the choice of flavored coffees and smoothies for example."

Cooley, a veteran of healthcare foodservice whose resume includes stops at Temple University Hospital and Cooper Hospital in Camden, NJ, had been working as a consultant when Inglis approached him two years ago to help the institution transition its foodservice from contract to self-operation.

“They knew how hard the culture change was going to be so they decided to hire me outright to get the transition done,” he says.
Initially, Cooley had adopted the menu served by the contractor but has since been slowly changing and enhancing it. It’s a challenge because the four-week cycle must accommodate a patient population that ranges from age 19 to age 90 and is a mix of demographic backgrounds, from inner city residents to those coming from suburbs and small towns. Almost all are on Medicare or Medicaid.

“We’re a magnet for multiple sclerosis patients from all over,” Cooley says. “Although we’re based in downtown Philadelphia, we serve most of the states from the Eastern Seaboard.“

The condition of the patients poses several food-related problems.

For one thing, because they are paralyzed, the residents tend to develop bed sores, which necessitates more protein in the diet, Cooley says.

Weight gain is another issue, especially since it is difficult for multiple sclerosis sufferers to exercise sufficiently. Meanwhile, degeneration of nerve tissue due to MS also causes patients to lose their ability to maintain and monitor their body temperatures.

“As a result some are either cold all the time or hot all the time, and that seems to burn a lot of calories,” Cooley says. “In addition, sometimes they lose the nerves in the tongue and the ability to taste, so I have people really hooked on junk food because they can still taste the extreme salty and sweet flavors, but not the more subtle flavors in the more nutritious foods.”

A little less than half of the residents can feed themselves, so certified nursing assistants provide help. From the food production standpoint, the biggest issue is to provide attractive ground, pureed and thickened alternatives because many residents lose the swallowing reflex as their condition worsens.

“We have one of those Robot Coupe Blixers and make a lot of our own purees,” Cooley says. “While we buy all the thickened beverages we can, we also stock powdered thickeners to thicken soft drinks, apple cider and other drinks [even including beer]. We’re going through that culture change where we’re trying to make it as even for everyone as we can so they can have the same things if they choose.”

On the positive side, Cooley has found that the residents of Inglis House are highly motivated to engage with the dining department about menus.

“Paralyzed people have a lot of time to just think about their next meal, so I have much higher participation on my dining committee than most LTCs,” Cooley explains. “People really want to come in if they have an axe to grind and tell me what they want and what we can do for them. So we do more things off the menu, things for specific people, than most places, to please them. This is their home, where they live, and we want it to be as pleasant and comfortable as possible.”