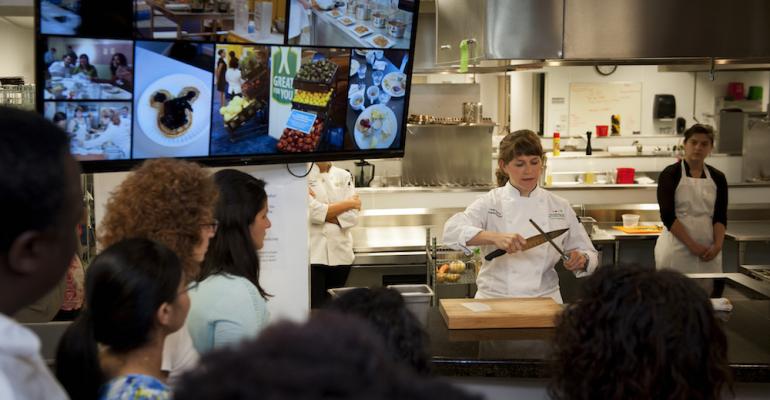 <p>Chef Leah Sarris leads a knife skills instruction at an event at the Goldring Center hosted for licensee schools and organizations across the country.</p>
News & Trends>Healthcare

Tulane’s Goldring Center for Culinary Medicine is teaching doctors the importance of a healthy diet and culinary skills to help them better serve their patients.

About six and a half years ago, the dean of Tulane University School of Medicine came to Dr. Timothy Harlan with an idea. He wanted to teach medical students how to cook.

At the time, no medical school in the country was incorporating culinary teaching into med students' studies. But to Dr. Harlan, who is know as Dr. Gourmet, thanks to his website with that name and his books on healthy eating, the connection between culinarily capable doctors and healthy patients was clear.

So Tulane University created the Goldring Center for Culinary Medicine with the goal of teaching medical students culinary skills so they can help patients make dietary changes to improve their health—but the center has become much more.

The team decided to expand the culinary teachings to the community as well. This made sense financially: “The reason that some of the philanthropy [for the center] occurred was because we decided to put this out in the community.” Harlan declined to give specifics on donations, but said patrons were more likely to help the community rather than just medical students.

"When you start talking about the community, that’s a completely different conversation," Harlan says. "We’re talking about reaching hundreds and thousands of community members in New Orleans on a perpetual basis."

For the first few years, the Goldring Center for Culinary Medicine was located in what Harlan calls an ad-hoc space in the medical school. It was a former catering space, with a few induction burners. It didn’t offer room for many more than eight students at a time. At first staff members taught small groups of medical students and community members while they honed the center's curriculums. The center also hosts classes for continuing medical education where physician assistants, pharmacists, physicians, dietitians and others can gain certificates.

The less-than-ideal space was a blessing in disguise, Harlan says. "We were able to develop programming that we now can easily share with our partner medical schools around the country. We can say, ‘Look, if you don’t have a lot of funding to start out, here’s how we did it on a shoestring,’” he says. Today the Goldring Center licenses the curriculum to 21 schools around the country.

It’s clear that medical schools are beginning to understand the importance of culinary training.

Many of the courses Sarris teaches center around the principles of the Mediterranean diet, which include cooking with plant-based foods, whole grains, legumes and nuts, and replacing butter and salt with oils and spices.

“Essentially we take the information that medical students learn in the first two years of medical school or preclinical work—physiology, biochemistry, metabolism, information about vitamins, cofactors, etc., etc., etc.—and we translate that into the conversation that you will have in the examination room with your patient about food,” Harlan says. The medical students cooking classes have a case study component where they discuss how they might use their new cooking knowledge to help patients.

Medical students also help to teach the community classes. “Students get the opportunity almost immediately to be able to have that patient interaction in this lifestyle medicine food arena that they might not get until they’re a third year,” Harlan says.

Feedback from medical students has been largely positive, Sarris adds. “This generation is ready for this, and they understand the importance of this. I don’t know if it would have been like that 10 or so years ago.”

The classes for medical students had been electives since the center’s inception, but last year the school decided to make a series of classes required for medical students, in addition to offering elective courses. The new requirement was well timed with the opening of the center’s new 4,600-square-foot kitchen in the Refresh Project, a “health hub” off campus, which includes a Whole Foods and a teaching farm.

The school also offers a month-long rotation where students from Johnson & Wales come to learn the medical side of cooking, and Tulane students work on more advanced cooking techniques at the culinary school.

The on-campus dining service works with the center, too, collaborating on events and recipes. “We’re both having a positive influence on each other,” Sarris says.