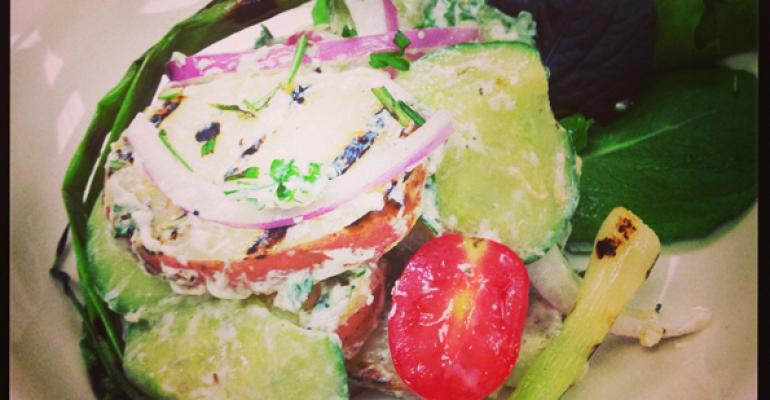 From gloppy to light and refreshing, changing a classic side dish. The recipe from James Roth, CEC

Making a few meaningful switches, adding a surprise ingredient and herbing it up with sharper flavors was all it took for James Roth, CEC, to lighten up the potato salad. But the executive chef at Elmhurst Memorial Hospital, Elmhurst, IL, says “healthy” isn’t the first thing he wants customers to notice about this salad and other better-for-you menu items he’s been developing.

“I don’t want to focus too much on communicating to customers that a dish is 'healthy' or 'better for you,'” Roth says. “We’re continually striving to substitute ingredients to make things much healthier, but if people see it as a mandate, ‘We’re not longer offering this item,’ then that rubs them the wrong way.

The potato salad has actually come out better tasting after lightening up, “delivering an unexpected brightness in taste and texture,” Roth says, thanks to Greek yogurt, red onion and fresh herbs.

The Greek yogurt takes the place of old school mayo and/or sour cream, making the dish healthier from the get-go. The surprise ingredient, which is occasionally seen in some potato salad recipes, is the cool cucumber.

Instead of loading up on more potatoes, the cucumber gives shape and heft to the salad, and also the hint of a delicate, refreshing crunch. Here’s the recipe:

Honey mustard. (whisk a tablespoon of your favorite honey to 2 tablespoons of Dijon or Creole mustard)

1.    In a large saucepan, cover the potatoes with water and bring to a boil. Add a generous pinch of salt and simmer over moderately low heat until just tender, about 15 minutes. Drain the potatoes and let cool completely, then cut them in half lengthwise.

2.    Meanwhile, in a large bowl, whisk the sour cream and yogurt, vinegar, corn syrup, mustard, celery seeds and garlic. Gradually whisk in the 1/4 cup of olive oil. Stir in the crushed red pepper, ½ the oregano and 1 teaspoon of minced parsley and season the dressing with salt and pepper.

3.    Light a grill or preheat a grill pan. Generously brush the potatoes with oil and season with salt and pepper and minced rosemary. Grill the potatoes, cut side down, over moderately high heat, turning once, until lightly charred and hot, 5 minutes. Transfer to a plate and let cool slightly.

4.    Toss the potatoes with the yogurt dressing and season them with salt and pepper. Fold in the cucumber, red onion and the 1/2 cup of chopped parsley and serve molded loosely on a bed of favorite greens with a grilled scallion wrap around the potato salad. Drizzle with honey mustard.