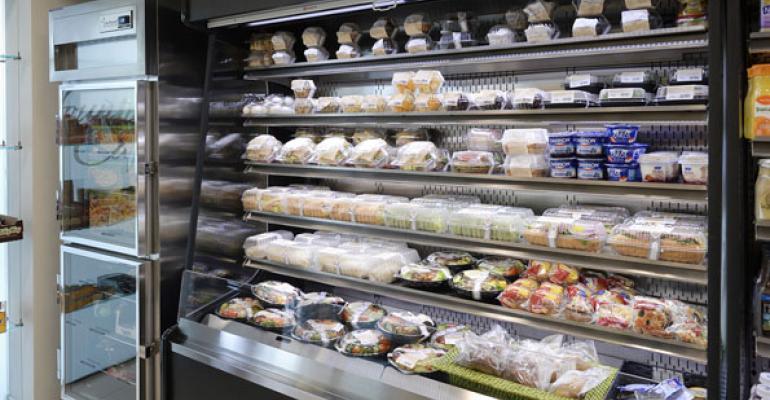 <p>Florida Hospital produces fresh grab-and-go for its micro market in its own central kitchen.</p>
News & Trends>Healthcare

In its efforts to provide all employees with healthful dining choices, Florida Hospital has gone the micro-market route at two locations where there is enough of a population base and adequate available space. The system had experimented with a “meal plan” style system but sees the micro-market as a better solution, at least for now, in select sites, says Nutritional Services Administrative Director Don Bartlett.

The micro-markets are in two offsite office locations with 400 and 800 employees, respectively, that are manned around the clock (call centers, etc.) and are lockdown buildings with no external traffic. “They are ideal setups for micro-markets,” Bartlett says.

“You want to have enough traffic so that it’s worth your while to do deliveries because once you get out of the vending realm, now you’re talking about perishables,” Bartlett says. “To be even somewhat healthy, you’ve got to get into some perishable food sources.”

The first one opened in partnership with the hospital’s vending services provider, which continues to provide the majority of the product for that location. The second one was established by the hospital itself in its corporate headquarters, using its own automated POS. The fresh food inventory is made in Florida Hospital’s central production kitchen. Selections include parfaits and various salads and sandwiches.

“It’s doing a great business, has boosted revenue and has been very well received,” Bartlett says. The hospital is considering bringing operation of the other micro-market in-house as well, he says.

The initiative may expand to hospital sites at some point, Bartlett notes. “We had always shied away from that because of the outside traffic, but we have this huge base of nightshift employees in all of our facilities.”

Currently, the café in the largest hospital stays open until 2 a.m. but most others are closed by midnight, leaving vending and bring-your-own as the only options. Security issues could be addressed in the same way they are in doctors’ lounges, which require badge access and have remained fairly secure. “So why not have a micro-market with badge access?” Bartlett says. “Employees would know it was there but it wouldn’t be open for external customers, who would still have vending options.”

Space might be found in employee relaxation/fitness areas the hospital system is contemplating setting up as a way to promote wellness and stress reduction among its staff. “We might be able to carve out some space in these areas for micro-markets filled with healthier dining options,” Bartlett says.