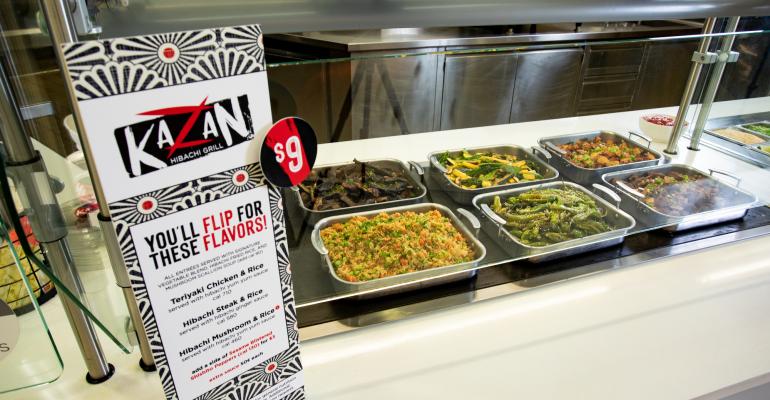 The only regret Jeffrey Quasha has about Morrison Healthcare’s Kazan teppanyaki popup is that he didn’t roll it out sooner.

“When we run it, we get slammed,” says Quasha, senior director of culinary innovation at Morrison. Some hospitals see dozens of hungry guests lined up out the door for three hours straight on days Kazan is on the schedule.

Because the lure of teppanyaki draws in many new guests, Kazan is not cannibalizing sales at other stations. They also tend to spend more—check averages increase by 14 percent on Kazan-designated days, according to Morrison.

Introduced in 2021 as a fast casual, innovative spin on the classic Japanese steakhouse, Kazan is a complete grill takeover. Hospitals without grill stations can adapt the concept by organizing an assembly station where team members combine ingredients prepped in advance.

“It’s not difficult to convert the stations, as long as the mise en place is ready,” Quasha says.

“It’s just a matter of assembling or cooking the orders.”

Developing a menu that could be easily executed at hospitals of various sizes, while still offering authentic teppanyaki flavor, was an early hurdle. Quasha opted to structure the menu around a signature fried rice. Bowls start with a flavorful jasmine rice fried in sesame oil with garlic, ginger and lemon grass and tossed with shelled edamame, scallions, peas, carrots, hoisin sauce, gluten-free soy sauce and fresh lime juice.

Guests can order the bowls with items like teriyaki chicken, hibachi-style steak, shiitake mushrooms, blistered shishito peppers, mushrooms, scallion broth and homemade ginger and yum yum sauces. The steak option is a big seller, and a vegetable bowl topped with a hibachi-style mushroom has been a popular entrée.

The concept can work for lunch or dinner, and it’s also an option for doctors’ dining spaces.

Chefs at some Morrison locations have lent their own twist to the menu. The initial choices didn’t include items like shrimp or pork, in consideration of hospitals with kosher-style menus, but some locations have added shrimp or wild Alaskan salmon as an option. One hospital offered crispy tofu marinated in ginger sauce as a protein choice.

Quasha says he loves to see that kind of unit-level creativity—in fact, it’s one of the goals of the takeovers. Besides offering guests more variety and keeping hospitals competitive with outside eateries, “we do popups to drive innovation and inspire our chefs,” he notes.

So far, Morrison has rolled out 58 popups, with four more in the works for next year. They typically run for a day on a rotating schedule. Considering Kazan’s popularity, client hospitals try to offer it at least once in a four-week cycle, Quasha notes.

Quasha, who has been focused on retail concept development, has recently turned his attention to patient dining as well. He sees a place for limited time offers on patient menus that mirror the retail side. “Why can’t a patient get a hibachi meal if it’s being done on the retail side?” he reasons.