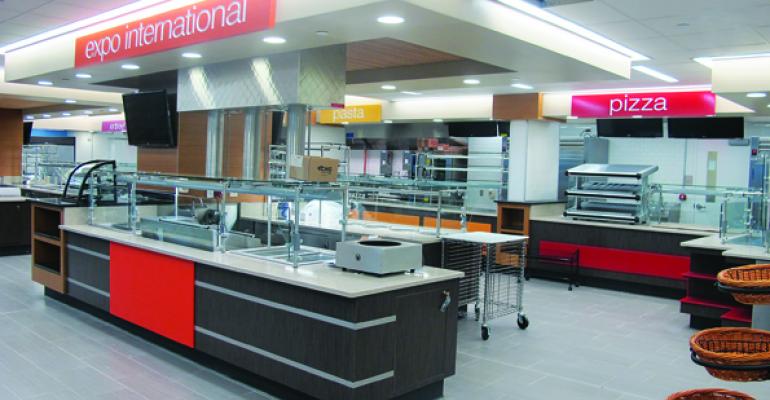 The new cafe at Geisinger Medical Center includes a dozen new serving stations with everything from international dishes to pizza.
News & Trends>Healthcare

The new facility, which opened at the beginning of January, replaces three older retail operations, including the former main café located at the other end of the campus.

Forty-two monitors ring the new café, some of them with interactive features that let customers dig into the station menus and call up nutritional information.

Also new is a 50-seat demo kitchen in the new complex, where the culinary staff hold cooking and nutrition education events that can be video taped.

The café remains open 24 hours a day, seven days a week, though only a few stations (on a rotating basis to provide variety) are open at off hours.

The one downside of the new venue is its location away from the existing production kitchen at the other end of campus.

“This new area didn’t include a production space in this phase of construction,” explains Associate VP of Guest Services Bruce Thomas. “We do plan to break ground on a new production kitchen to be located at this end of campus in two years,” he adds. “This is all part of a long-term construction project.”

The shift in locations hasn’t seemed to affect traffic, which has been up about 25 percent from the combined traffic of the three closed facilities so far.

Thomas says he plans to open a kiosk operation in the lobby of the lab building to accommodate those most inconvenienced. There is also a new 24-hour Subway at the site of the old café.