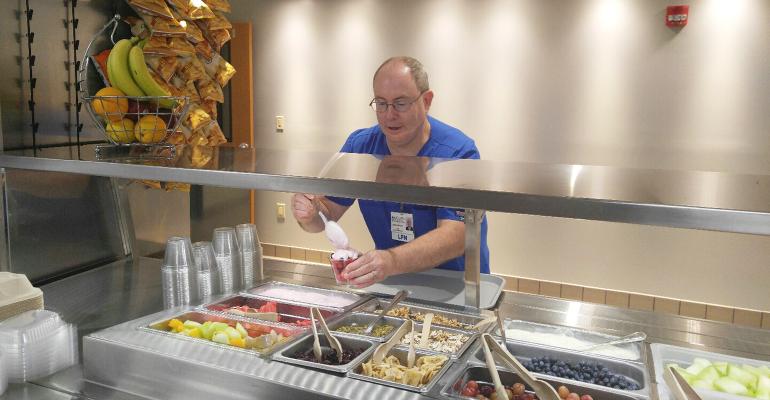 Rockcastle Regional has increased both its in-patient beds and staff size, and a new building allowed the addition of greatly expanded foodservice space.

It’s a challenge a number of dining departments at healthcare facilities are facing: the institution expands, straining foodservice infrastructure that wasn’t designed to deal with the increased volume. But investment dollars for new, larger kitchen and café facilities are hard to come by.

That was the situation facing the dining department at Rockcastle Regional Hospital & Respiratory Care Center in Mt. Vernon, Ky., recently as the institution added patient beds and saw its employee base grow to more than 800 from the 100 to 150 who were there when the dining facilities were originally constructed, explains Jana Bray, community relation director at Rockcastle.

“Our old kitchen was extremely small,” she says. “It was very appropriate for a staff of 100 to 200 and a few beds, but we’re now up to 121 ventilator-dependent beds and 20 acute-care beds, so between that and the [increased number of] employees, we just outgrew the site.”

Fortunately, there was a solution as Rockcastle was planning an expansion of its respiratory care center, “so when we added the new building there was enough room to expand our kitchen plus [put in] a very large cafeteria,” Bray says.

The opening of the new cafeteria space solved another problem: the lack of a designated dining area for Rockcastle’s long-term care patients. Now, the old cafeteria’s servery and seating space is filling that need while the old kitchen space is slated to be converted to clinical uses in all likelihood.

The new cafeteria with its much larger footprint has allowed the dining department to offer a more expansive menu and much more choice, including for the first time a grab-and-go cooler stocked with selections such as fresh-made sandwiches (using freshly baked breads thanks to a proofing cabinet the new kitchen now boasts), wraps, salads, parfaits, fresh fruit and heat-and-eat meals. That’s a major step up from the takeout boxes on the hot line that were the only to-go option in the old cafeteria.

“That has become the biggest hit of the new cafeteria,” Bray notes. “It’s great for employees because it’s all already prepared and ready in the morning, so when they go down for breakfast and know they’ll have a busy lunchtime, they can get something to take back.”

As for breakfast itself, the new, expanded space has allowed the installation of an everyday yogurt bar complete with fresh-cut fruit, seeds, nuts and other healthy components. That has been another big hit, Bray says, and helps raise the nutritional profile of the offerings.

At lunchtime, the old cafeteria’s single hot line was limited to a couple of entrée choices and three or four sides each day while the very rudimentary salad bar was difficult for the dining staff to access and keep replenished, especially at busy times. The expanded salad bar is not only larger than the previous one but more easily accessible for staff to replenish and keep neat.

The new cafeteria’s much larger salad bar by contrast is conveniently located for the staff to access from the back of the house, making restocking and tidying up easy. Daily entrée choices have also basically doubled and are augmented by selections like burgers from a grill in the back of the house (another first for Rockcastle—the old cafeteria lacked a grill) and by another popular new feature: a pizza oven that operates more or less continuously, “continuously” meaning round the clock as the new cafeteria is a 24/7 operation.

That’s significant because the Rockcastle cafeteria is now the only 24-hour restaurant (other than a McDonald’s) in the county. “We’re now seeing a lot of the third-shift employees from companies in the area come here to eat,” Bray says.

To prepare for the expanded and altered operational procedures, Dining Services Director Jonas Adams had his cooks spend several hours several days a week working in the new surroundings for a couple of weeks before the changeover (one major change that took getting used to: the new space uses gas stoves while the old space used electric). The new kitchen, like the old one, turns out components for both the retail cafeteria and for room service meals for both long-term and acute-care patients.

The conversion from the old space to the new took place over a weekend to minimize disruption. On the Friday leading to that weekend, the dining team offered free breakfasts and lunches at the new cafeteria to encourage a crowd it could use as a test run without alienating paying customers as the glitches were worked out.

It seems to be working as meal counts are up by about a third since the new kitchen and cafeteria opened. Helping that is the fact that the new registers take credit and debit cards now for the first time.

Rockcastle is also becoming a destination restaurant for outsiders, something no one would have imagined of the old cafeteria.

“We don’t have a lot of restaurant selection in our town, so a lot of the community comes in and eats here even if they don’t have any hospital business,” Bray offers. “It’s been a really nice addition for the community in terms of options to eat—and to eat healthy food—and because our price point is extremely low, it gives a very affordable healthy option for everyone.”