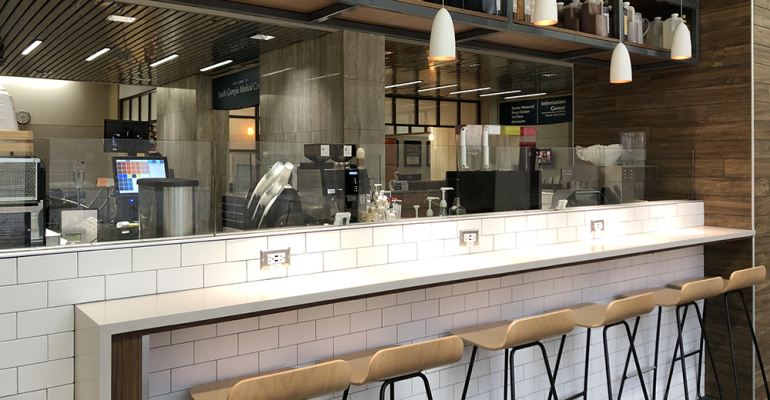 Employees and visitors of South Georgia Medical Center (SGMC) long had the option of grabbing a basic cup of coffee at the hospital’s cafeteria. But when a shiny new coffee bar set up shop in the main lobby, the ambiance of the hospital’s entrance area was transformed. And even better, their revenue skyrocketed.

SGMC’s dining contractor Morrison Healthcare had been looking for a way to give the ho-hum lobby an exciting lift and turn it into a revenue-generating space. Eventually they settled on Market Coffee, a Starbucks-branded communal coffee bar complete with coffee and espresso drinks, professionally trained baristas, charging stations, snacks, and trendy design details like warm wood paneling and clean, white subway tile.

The lobby had always served as the waiting area for patients and loved ones, who were often on the lookout for quick refreshments. But the cafeteria was a long walk away, and it wasn’t open for breakfast in the morning. Putting a modern coffee bar in a space where people were already spending long chunks of time was an easy way to make the area feel a little homier and help the hospital earn more money at the same time. “It feels more like an airport lounge than a hospital. It has become a profitable space of respite and delight,” explains Kevin Dorr, Morrison Healthcare vice president of retail solutions. 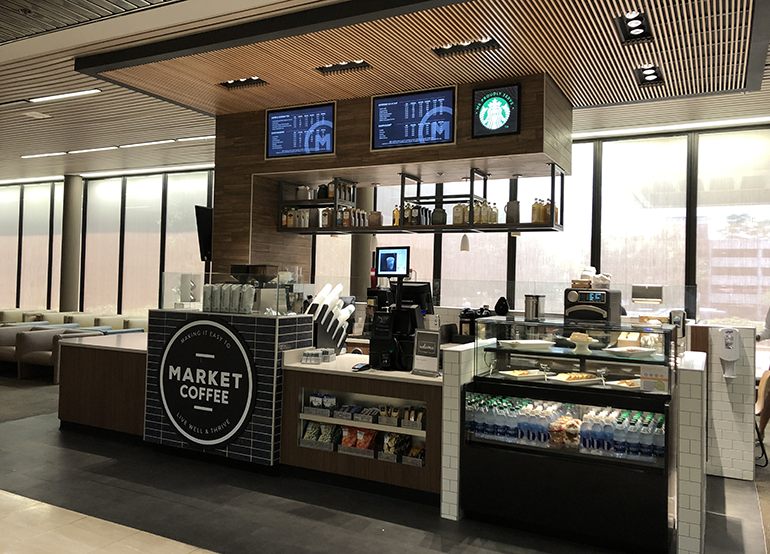 Another great reason to sell coffee in the lobby? Valdosta State University’s campus was located right across the street, providing the kiosk with a second built-in customer base. “SGMC shares a parking deck with the university, and Morrison wanted to leverage foot traffic into revenue,” Dorr says. And with the next-closest Starbucks located 1.5 miles away, it seemed likely that even students who weren’t coming from the parking deck would walk over from campus to grab a quick drink. “They wouldn’t have to drive to get their coffee,” says SGMC Systems Director Gary Harrell.

Market Coffee offers Starbucks-branded blended coffee and espresso drinks that are available hot or iced. All of the drinks are handcrafted to order. Scones, bagels, muffins and cinnamon rolls are available for purchase during breakfast hours. And fresh-baked cookies, cheesecake, brownies and yogurt parfaits are available in the afternoon and early evening. There’s a selection of healthier snacks too, including Lara and KIND bars, dark chocolate, nuts and fresh fruit. The coffee bar is open from 6:30 a.m. to 7 p.m.

Rolling out the coffee bar was a fairly straightforward process. Morrison and SGMC started planning the concept in May 2018 with the help of the Baton Rouge-based branding firm Street Collaborative. Atlanta-based JB+J Construction began the build-out in November 2018, and Market Coffee opened for business in early January 2019. “There were no real challenges,” Harrell says.

Installing Market Coffee called for reconfiguring some of the lobby seating. But it didn’t result in less space for guests to sit overall, Harrell points out. In fact, the only downside of putting a coffee bar in the waiting area was the lack of nearby storage space. “Product is currently being stored in the foodservices storeroom,” Harrell says. The kiosk does have a small amount of storage under the cabinets and in the overhead area, though, which is enough to house a day’s worth of product.

If you suspected that a hospital lobby coffee bar would prove hugely successful, you’d be right. Market Coffee has consistently generated around $22,000 per month in sales since opening in January, reports Dorr. “Visitors have been pleased,” Harrell says. Hospital employees are thrilled with the option of having another place to caffeinate quickly. The community at large, including Valdosta University students, are excited about the space too.

In all, Morrison spent $415,000 in design, construction and equipment, as well as Starbucks-branded merchandising expenses. But the hefty sum wasn’t just an investment in SGMC. “The Market Coffee kiosk was built as a corporately developed prototype concept with intention for broad implementation,” Dorr says. “What began as a simple client request for creating a more dynamic sense of place for the hospital main entrance lobby grew a new lucrative coffee concept worthy of rolling out to hospital lobbies across the country.”