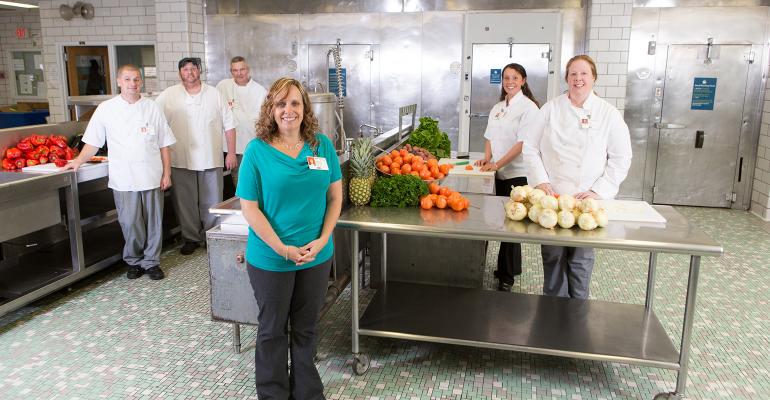 Community supported agriculture (CSA) is supporting the community’s health at Southwestern Vermont Medical Center (SVMC) in Bennington, Vt. For the past four years, the hospital has connected farmers to patients and set out to improve the overall health of the community with the power of fresh produce…plus a lot of collaboration and coordination.

“We came up with a collaborative program that met the needs of our community partners and our partners here,” says Tiffany Tobin, director of dietary services at SVMC. “There were folks in the community who didn’t have access to fresh fruits and vegetables. And there’s a rehab group that spends 12 weeks together trying to learn good habits while they’re recovering.”

A weekly CSA program over 12 weeks of summer has been the answer, mainly because “we know fresh fruits and vegetables are linked to better health,” Tobin says.

The demand for locally grown produce has contributed to a CSA boom, according to research from the Department of Agriculture at the University of Kentucky, which estimates there are now more than 4,000 CSAs across the country. The increasing awareness about the lifestyle-diet-health link makes a multifaceted project like the one at SVMC especially timely.

When SVMC Executive Chef Laura LaCroix and Retail Manager Andrea Wheeler got involved, the CSA took on even more dimensions.

When the produce arrives from local farms, Wheeler handles the logistics of distributing the harvest to different parts of the hospital’s foodservice operations, and LaCroix prepares samples of a different recipe each week and demonstrates to the rehab class how to make simple, healthy dishes like tomato chickpea salad, sautéed greens, watermelon-mint salad, spring greens with cilantro dressing and roasted summer vegetables.

Participants in the rehab class get a CSA cookbook (written through a partnership with other healthcare systems) that also includes basics on measuring, freezing food and even shopping on a low income.

“Watching Laura demo these items in front of folks…I have to say that this is a way of showing that this isn’t as complicated as it looks on paper,” Tobin says. “It’s great for the patients because it puts them at ease.”

None of the recipes have hard-to-find ingredients or too much prep work since “they may be coming out of surgery and they can’t stand for long periods of time,” Tobin says. “You can’t spend 20 minutes chopping.”

LaCroix has also experimented with many varieties of agua fresca to be served with the cooking demo food, including cucumber-melon, fennel, grapefruit, apple-cinnamon and even tomato-basil.

Another piece of the project is research. Data on fruit and vegetable consumption for the rehab group has been gathered through surveys.

Last year, the numbers showed that more than 80 percent of participating patients said that their intake of fruits and vegetables had increased over the 12-week program. And more than 85 percent reported they were “very likely” to continue with it.

Because of patient confidentiality laws, produce consumption was one area that could be studied unobtrusively. The surveys also provided information on the food deserts of the area.

SVMC also partners with Veggie Van Go, a program that brings fresh produce directly out into food deserts, and Grateful Hearts, the hospital’s summer initiative where the Vermont Food Bank provides healthy groceries to those in the community who need it, data that’s also tracked, “to get an idea of what the community is challenged with,” Tobin says. “We know we’re making a difference for the relief of food insecurity.”

Taking things a step further, the leftover parts of the CSA deliveries are processed in the hospital’s central production kitchen and then given out to local soup kitchens and churches.

“Last week we had leftover rainbow carrots, onions and cauliflower, so for small amounts of time, groups of people prepped chili and packaged it into about 200 five-serving packets, froze that and gave it to soup kitchens,” LaCroix says. “We donated over 30,000 meals last year. It’s a way to get wholesome, nutritious food to people.”