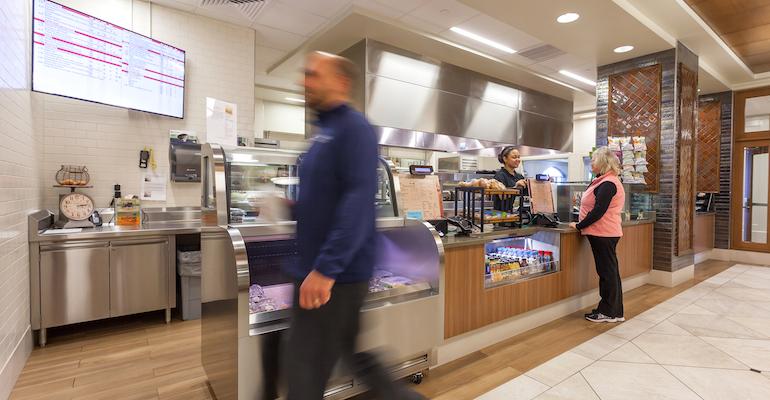 Mike Smith/Sanford Health
One advantage Sanford Health has in the current crisis is its retail dining model built on individual restaurants, which makes adapting to changes in customer traffic easier to handle.
News & Trends>Healthcare

How the culinary services crew operating retail and patient dining for Sanford Health in North Dakota deals with the threats and realities posed by COVID-19.

Sanford Health in North Dakota is a major regional healthcare system in an area of the country that may not have been hit with coronavirus as much as some other more densely populated parts, but has been significantly impacted nevertheless.

While formal shelter-in-place mandates had not been issued in the state (as of the end of March) as they have in many others, there are still social distancing requirements that have many individuals working from home who are able to do so. Also, all schools and colleges in the state have suspended face-to-face classes.

Related: Stories from the front lines: An Indiana K-12 food service director’s story of feeding kids during the coronavirus crisis

The Sanford system’s dining program, which was named FM’s Healthcare Innovator of the Year in 2018, relies on commercial-style self-branded restaurant concepts for its retail dining and on-demand room service for patient dining.

Both have been affected, though in different ways.

Retail dining has seen customer counts drop dramatically as visitors have been barred from the premises since March 27th, except for limited exceptions made for pediatric, birth and end-of-life cases (and even previously, only one visitor per patient per day was the allowed limit). 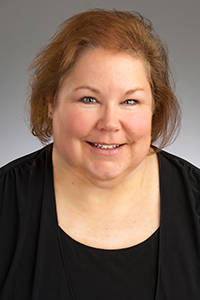 Meanwhile, up until a few weeks ago, the patient census was running as usual, but then general public messaging about the need to limit non-critical surgeries and procedures while the coronavirus threat existed has reduced the in-patient census by about 40%, says Culinary Services Director Lisa Gibson, a situation markedly different from some much more heavily populated areas of the country where hospital capacities are already being strained.

“We have plenty of beds and have created our own special care unit just for the surge of COVID patients,” she explains. “Were we to get that here in the Dakotas, we have plenty of open beds throughout the state and would be able to care for any critical-care needs patients might have.”

As for dining operations, “we haven’t changed much when it comes to patient meals,” Gibson says. “We have full room service and we can flex up or down pretty easily,” while in retail dining, “we don’t have the big cafeteria, so we’re able to open and close the free-standing restaurant concepts, such as the three at our main medical center, based on volume and need.”

Hours have already been reduced at the retail dining outlets at the main facility, and, starting the week of March 30, one is closed over the lunch hour while a second one closes shortly afterward, leaving one that can be operated with minimum staff.

“We have that approach at all of our campuses for the most part and it works really well because we’re able to flex up and down as the volume [fluctuates] while still serving all of our clinicians and providers,” Gibson offers.

The free-standing restaurants already were mostly operated as fast-casual concepts offering order and pickup for takeout. One sit-down venue remains open, but only for breakfast and seating has been spread out to limit potential virus transmission. The venue only takes online to-go orders at lunch.

One interesting result of the operational changes forced by coronavirus has been in the area of online ordering, Gibson observes.

“I think it’s going to be one of those things where while we had it in place, not a lot of people used it prior to COVID, but now I think a lot of people have found out that’s it’s pretty slick. I think one of the good things that’s going to come out of this is to have a higher number of users of online order among employees because they’ve figured out that it actually works pretty well.”

As for the menus, they haven’t changed very much so far even with more emphasis on takeout and grab and go.

“We had a pretty robust grab-and-go [menu] to begin with because we operate three micro markets 24 hours a day, and so a lot of our grab and go is available in those, as well as packaged food and beverages and so forth,” Gibson says. “I don’t know if we necessarily implemented any more recipes, but we have put different products in different locations where they haven’t necessarily been before, so we’ve enhanced that whole grab-and-go feature in most of our restaurants.”

The micro markets are located in all three of Sanford’s medical center locations and they had all been doing very well even before the coronavirus crisis.

“Staff can go in and either use their ID badge to pay or set up an online credit card account, and that has been really well received,” Gibson explains. “We have a lot of refrigerated and freezer food they can choose from, as well as beverages and a whole range of snacks.”

One possible addition being contemplated is a pantry from which staff could grab basics like eggs, milk and bread, and perhaps even prepared entrées.

“The only problem is that we are having a bit of a shortage on eggs and milk, at least in North Dakota,” she notes. “It’s not that we’re completely out of it, but we’re not getting everything in that we need at this point, so we’re a little reluctant to start [the pantry] program—but we’re working on it.”

She notes that the shortfalls don’t extend to other staples like fresh produce or meats. “The only shortages we’re seeing in consumables [currently] are in dairy, eggs and bread. We get our bread from a huge manufacturer here in Fargo, but we do have other sources we can go to for bread if we have to.”

In the area of cleaning and sanitizing chemicals, Gibson there was early concern in the Sanford system, which in addition to its hospitals and medical centers also operates some 600 long-term-care facilities under the Good Samaritan brand.

“Very early on, we had to gather all our tabletop sanitizers from all the non-clinical areas and sent those to our Good Sam division because they were struggling with getting sanitizer,” she says.

In the food production area, Sanford’s central kitchen model allows quite a bit of flexibility and adaptability to new situations, Gibson says.

“We can control a lot of the things that we’re sending out. We’ve reduced the numbers and portions of what we’re producing and trying to produce in smaller batches. Where it makes sense, we’ve taken things off that are just really hard to produce and hard to manage in terms of how much we make. We’ve made some tweaks to the menu [and] reduced some overall selections. Of course, we don’t have any salad bars or anything like that still in operation anymore.”

“In our physicians’ lounge, where we used to have plates before, we now encourage them to come in and take what they need [using disposable takeout containers], then go back to their offices,” Gibson says. At the retail dining outlets, single-use packages and cutlery were already the norm, so there has been little change.

As for staffing, “we’re not scheduling any of what we call our casual staff,” Gibson explains. “Our part-time staff are only filling in where the full-time staff are not able to pick up the slack, but what we’ve done is move staff from one restaurant over to another to ensure that we’re able to handle the volume of people coming through faster than when we were split up and had three areas operating. We’re trying to make sure that we give [our employees] as many hours as possible, given that we have to reduce our overall operational hours.”

“We want to make sure that we’re educating staff so there’s more of a touch-base or rounding—even though we’ve already been rounding on a daily basis—in terms of the managers and supervisors being out and about and really being there and answering questions and trying to help any of the staff who have questions,” Gibson says.

Nutrition services has also been lending a hand to other departments in terms of regularly sanitizing high-touch surfaces—handrails, desktops, elevator buttons—so those tasks don’t get left until the end of the day after a lot of germs have already piled up.

“We’re doing those more on an hourly rounding or frequent basis just to help them out,” she adds. All in all, Gibson feels that an institution like Sanford is better prepared than most for the kind of pivot to emergency footing the coronavirus threat has required.

“As a hospital facility, we’re constantly planning for something like this, whether it’s a pandemic or some other kind of emergency, like the storms we can have here in North Dakota,” she says, “so I think we’re set pretty well in terms of being able to handle the additional patients, the surge of patients and the type of patients. It’s something we plan for all the time, in healthcare anyway.”