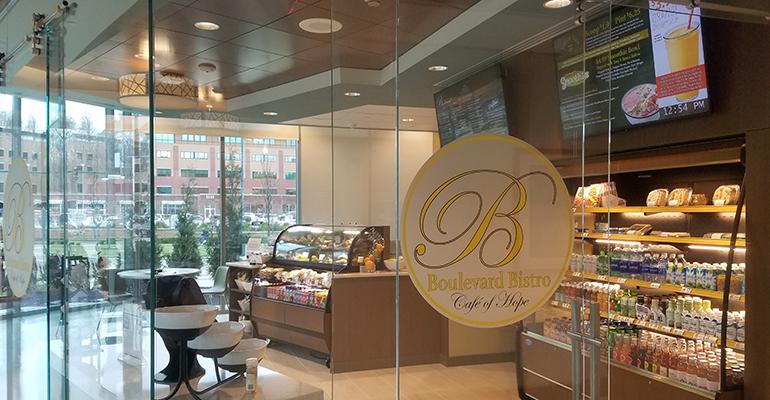 Kettering Cancer Center
The Boulevard Bistro offers a menu based on cancer-fighting foods served in a relaxing environment.
News & Trends>Healthcare

A menu centered on organic, high-protein, and antioxidant-rich foods caters to the needs—and tastes—of patients

The creators of Kettering Cancer Center thought through every detail that could enhance the patient experience, including food choices. Along with home-like infusion bays and a stylish boutique that sells post-surgical products, the 120,000-square-foot facility houses Boulevard Bistro, a café centered around high-nutrient foods.

The idea originated with the members of a patient advisory council. The group played an integral role in everything from interior design to patient amenities during the development and design of the Ohio facility, which opened in December. The council wanted the café to be a source for antioxidant-rich, high-protein foods. They also wanted big flavor.

They ended up with a menu that’s novel in the Kettering network, one based on the top 25 foods with cancer-fighting components, as identified by the American Institute for Cancer Research. A list of these foods reads like a tutorial on whole foods eating: beans, legumes, whole grains, and fruits and vegetables lauded for their phytonutrient-packed profiles: apples, cherries, strawberries, dark leafy greens, cranberries, garlic, peas, and grapefruit, to name a few.

Most items, including a daily vegetarian soup, sandwiches, wraps, entrées, and a la carte items, are packed with fresh produce. The soba noodle salad, for instance, is made with cilantro, basil, onion, red peppers, and carrots. Their rosemary-almond white bean dip is served with a selection of crudités. Joan Fisher-Hatton, culinary retail manager, says the café sells a few sodas, but the rest of the grab-and-go drinks are more nutritious choices, such as sparkling water, coconut water, organic milk, and cold-pressed juices. Boulevard Bistro is the only venue in the Kettering network that serves organic coffee, sourced through H.C. Valentine.

Like a kiosk, the café is staffed by one barista who prepares custom coffee drinks and flatbreads and serves prepared salads. Unlike a kiosk, the space holds two coolers with drinks and menu items and a snack center stocked with nuts, fruit chips, and other packaged items.

Boulevard Bistro sources foods from UNFI; Kettering Health Network has an account with US Foods. Deliveries from both distributors are received at a single point in the main hospital where foods for all locations are prepared. Boulevard Bistro’s menu items are walked to the cancer center daily. “There was a lot to do, since this was an entire build. We had a year and half of meetings with the advisory council to make sure that every step of the way we were hitting the mark as far as equipment, products, and design.”

To allow staff members to have more time with each customer, Morgan purchased an automatic espresso machine. The other two major equipment purchases for the space were a Menumaster and a Vitamix.

So far, the café is outperforming other kiosks in the system.

“Our numbers in January and February show that the bistro has not taken away from any of the business we’ve done on our main campus,” Fisher-Hatton notes. “We are getting a new customer base.”

The café mainly serves patients, visitors and staff at the new building. But the design of the space may also be contributing to its success. The advisory council emphasized the need for the cancer center to be a warm, welcoming space. Accordingly, the café is light and open. Enclosed by floor-to-ceiling glass doors and walls, it opens onto a bright foyer with tables that overlook a landscaped courtyard with a fire pit.

“When we had our open houses, it was very heartwarming when people from the community came in and said, ‘We needed something like this,’” Cheryl Shimmin says. “That affirmed for me that we hit the nail on the head.”

In fact, some customers from the surrounding community have already become regulars.

“To pull people off the street is a sign of success for us.”