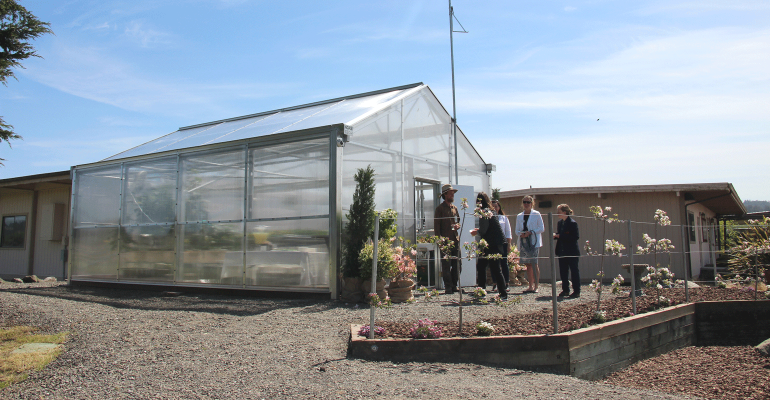 An increasing number of onsite dining programs are attempting to increase the amount of product they get from local sources, but it’s hard to get much more locally focused than Mad River Community Hospital in Arcata, Calif. That’s because the kitchens at Mad River have a practically year-round supply of fresh produce coming in from that most local of sources—the hospital’s own farm.

The two-acre plot, plus two greenhouses encompassing some 4,000 square feet, is located adjacent to the healthcare facility and supplies as much as 80 percent of the hospital kitchen’s produce needs from about June into November. That number has traditionally dropped to as little as 20 percent in the depth of winter—a relative term in Arcata, where temperatures almost never dip below the freezing point—but it will now grow significantly thanks to a new hydroponic greenhouse launched last November that is impervious to impact from the weather.

“[The winter] is where the controlled environment agriculture will really start to supplement [the farm fields] because we can now grow significantly more produce in the wintertime,” Heustis says.

The existing traditional fields already do a robust job of production, so much so that not only did it meet much of the hospital’s retail, patient dining and catering produce needs over the past year but was also able to donate some 4,500 pounds to the local food bank. Some produce from the farm is also sold at a food stand that operates in the hospital’s dining courtyard area two hours each week.

Mad River is a fairly small hospital licensed for 78 beds that rarely sees a daily census over 35, Heustis says. The kitchen also supplies meals to an onsite adult daycare operation and averages 400 to 600 meals a day across all aspects of its foodservice operations.

The introduction of hydroponic production will even out menus across seasons, Heustis says, since it will allow certain popular crops to be available year-round.

“With the controlled environment agriculture, we can have, say, strawberries or cherry tomatoes year-round,” he notes, “things we can specifically state we have and are serving on the menu as opposed to [rotating] more seasonal items.” Mad River Hospital has maintained a two-acre farm complete with two traditional greenhouses to grow much of its own fresh produce in an organic manner.

The use of onsite-grown produce is not advertised on either patient or retail menus, but customers generally know where it comes from, Heustis says.

“We get comments constantly about the produce coming from the farm on our Press Ganey surveys,” he notes. “We have a very agriculturally oriented community, and most people know about it.”

The availability of so much fresh-from-the-fields produce certainly influences menus in the hospital, with selections tilted toward dishes incorporating plenty of vegetables. Even traditionally meat or starch heavy dishes get an extra dose of veggies. Heustis cites the hospital’s beef stroganoff, which includes kale and winter squash leaves, as an example.

“Our salad bar is phenomenal, loaded with veggies from the farm,” he says proudly. “I have a huge following for the salad bar. It’s really been a long road from the hamburgers and french fries people used to like to eat here.”

The transition did have its ups and downs, not only in acclimating the customers to a more veggie-heavy menu, but familiarizing the staff with some of the new ingredients as well.

“I remember the first time I brought in a crate of beets,” Heustis laughs. “One of the cooks looked at me and asked, ‘What the heck do you want me to do with this?’ So we had this huge push to train staff how to process produce coming in in its natural form.”

Not everything that could be grown found a place on the menu. “There are a lot of things we can grow that we weren’t able to really find a good application for, like celeriac root and daikon radishes,” Heustis notes. “Also parsnips and turnips, the kinds of things that people will eat but they won’t eat a lot of. They grow really well and they’re easy to grow, but we really had to refine what was coming out of the farm on a consistent basis.”

Labor costs have definitely increased because, while the produce comes in clean—it is thoroughly washed at the farm—it is otherwise totally unprocessed, so trimming, peeling and chopping has to take place in the kitchen. In addition, the staff had to learn new recipes and get more creative as the kitchen has to depend on what the farm has available on relatively short notice.

On the other hand, procurement costs for fresh produce are significantly lower, especially as the farm’s crops are grown organically, so the proper price comparison is with commercially available organic substitutes, not standard mass-farmed product.

Heustis says the reason of the onsite farm and greenhouses can’t meet all of the hospital’s fresh produce needs even at the height of the growing season is either because the farm can’t grow some needed crops because of the climate or because of significant interruptions due to weather, pests, disease outbreaks and other natural phenomena farmers have had to deal with since the rise of agriculture. In those cases, a commercial supplier has to fill the gap.