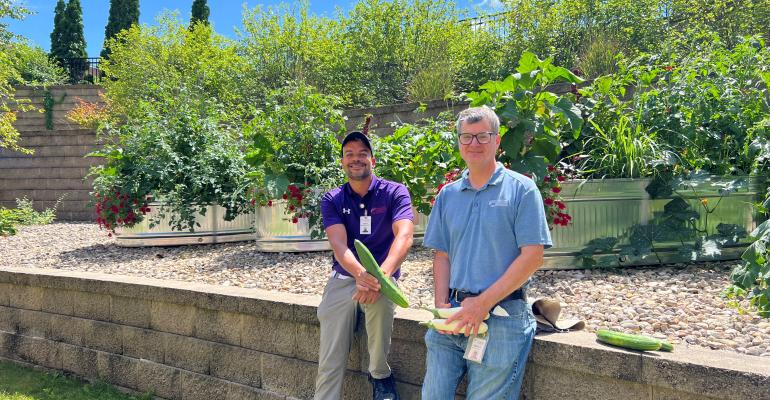 After success with a new container garden at Edgerton Hospital, the chef looks forward to expanding it next year.

A new garden at Edgerton Hospital in Edgerton, Wis., is providing a farm-to-table experience for patients, staff and visitors.

Located on a terrace near the café and kitchen, crops in the garden included about 15 varieties of herbs and vegetables, including several types of tomatoes, cucumbers, hot peppers, squash and eggplant.

Executive chef Joshua Ciafullo, who has made an effort to steer menus away from canned and frozen foods and adopt more scratch cooking, says the onsite garden has been a boon in several ways.

“The biggest benefit is that patients know they are getting fresh produce instead of having it shipped in,” he observes. “Having our own garden is definitely work, but it can also help with food costs.” He also appreciates the idea that the hospital has control over whether pesticides and other chemicals are used in growing. “We’re trying to keep those out and have it be a healthier alternative,” Ciafullo says. 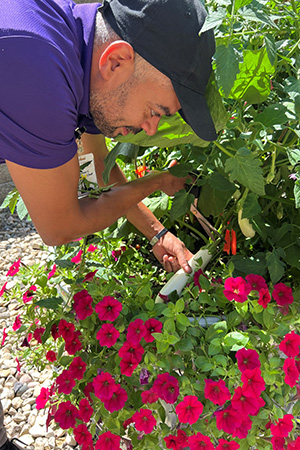 Photo: Planting and tending the garden have been team efforts.

The idea for the garden started with an unused space that Ciafullo and Mark Dwyer—who manages a separate healing garden on the hospital campus—decided would make an ideal environment for growing herbs and vegetables. The hospital brought in horse water troughs to serve as growing containers and the two worked out which crops would make sense, considering the space and climate.

Planting and tending the garden have been team efforts. Dwyer and hospital volunteers water the plants, and the dining staff and volunteers harvest product when it’s ripe.

By the end of the growing season, both Ciafullo and Dywer were pleasantly surprised at how productive the garden was. Cucumbers and tomato plants were the most prolific, followed by squash.

“Every day we were going out there to pick,” Ciafullo says. The kitchen made use of the crops by preparing items like cucumber and onion salads, Caprese salads and homemade tomato soup for the café line. When the fresh yellow squash was offered an option to patients, it was a big hit. Herbs have added fresh flavor accents across the menu. 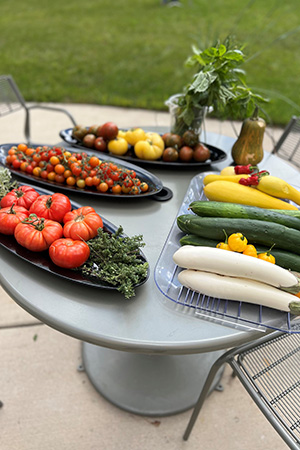 Photo: The containers yielded a bountiful harvest of vegetables and herbs for the hospital.

Wisconsin winters aren’t exactly conducive to most crops, but Ciafullo hasn’t ruled out trying to grow some hardier items. “Right now, it’s probably not possible, but hopefully if we can get a tarp or covering, we might try winter squash or pumpkins. It’s something we’ll be talking about in January,” he says.

This winter the containers will lie fallow, but Ciafullo is already looking forward to next spring.

“We want to expand into two more containers and probably do more herbs and a few more squash varieties,” Ciafullo says. “We’re looking at potatoes—maybe baby red potatoes, carrots, green onions and garlic, since we use plenty of garlic.” Next year, he and Dwyer intend to stagger plantings to stretch the growing season further and ensure more variety from spring through fall.

Ciafullo is a big fan of raising crops on the premises and says any hospital would benefit from adopting the practice, whether it’s through containers, a greenhouse or hydroponics. If he had his way and it were feasible, he says he would grow all the hospital’s produce onsite.