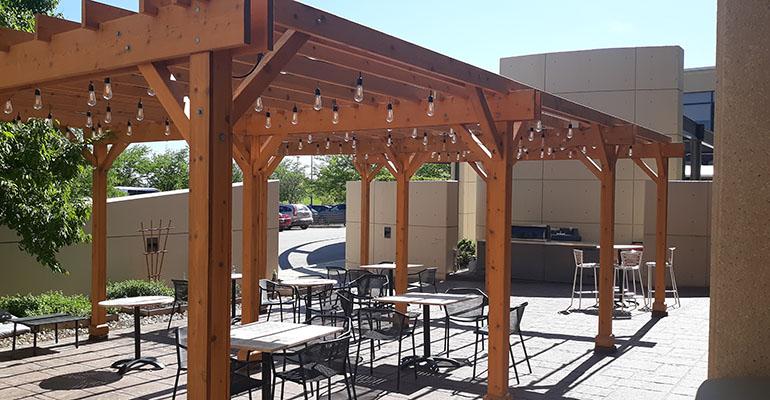 When Regional Hospital decided to update its retail dining, it not only renovated the interior café but added an outdoor component.

Café Nourish is the new retail dining operation for Regional Health Rapid City Hospital in South Dakota, and it has both the ins and outs of a great onsite eating establishment. The “ins” come from the newly renovated interior café space, vastly upgraded from the badly outdated cafeteria that the space held until last fall, while the “outs” is a new outdoor area with a grill and patio seating, plus a smoker unit to produce various smoked meats for Café Nourish.

The upgrades are one significant result of Regional Health’s engaging Morrison Healthcare to operate its dining services beginning about a year ago. Café Nourish opened last fall and does about 1,500 covers a day, including some walk-ins from the local community and nearby businesses.

The indoor renovation included new flooring and décor as well as new cooking and holding equipment, including a built-in salad bar, new display units for refrigerated grab and go options and a new deli bar with made-to-order service. The café also has a grill with a daily grilled sandwich special along with a regular menu, a “super foods” station that emphasizes a different super food each month in its offerings, an Italian station offering house-made pizzas, strombolis and calzones, and an entrée station on a three-week rotation. 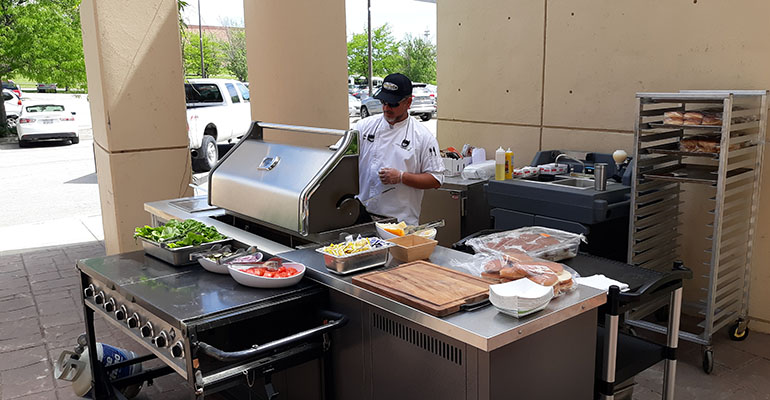 The new outdoor grill offers an alternative to the indoor serving stations.

The latter also serves as a platform for a special program to highlight the diversity and culinary knowledge of the dining staff by turning it over for a meal period to one of the team members to show off their cultural heritage. Among these special events will be days featuring traditional dishes prepared by staffers from the Philippines and Puerto Rico.

“We have an action station with induction burners where we usually cook items to order, and with the kind of diversity we have here, we like to show it off,” says Executive Chef Scott Brinker. “So, for example, we’ll have one of our staff who is from the Philippines out there one day to cook some of his own recipes and make a traditional Filipino meal out there.”

The new outdoor patio area has seating for around 50 and is located near the kitchen’s herb garden, which makes for a relaxing space. The grill offers daily specials, while the smoker turns out specialty items like brisket and pulled pork for service inside, often at the Liberty Grille micro-concept, one of Morrison’s Best Concept Award-winning rotating pop-up concepts program. 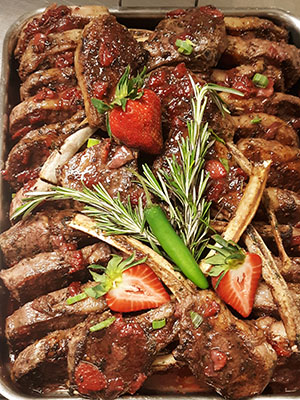 Photo: Smoked meats are turned out constantly by an outdoor smoker unit and served at various stations as well as in catering.
Credit: Regional Health/Morrison Healthcare

Smoked meats aren’t everyday offerings. Liberty Street rotates through the pop-up station about once a month and the rest of the time the smoker’s offerings appear about once a week—sometimes more—at other stations, as well as in onsite catering.

“People get hungry for it and we’ll run three or four things over a two-week cycle, then shut it down for a little while,” says Pete McQuiston, senior director of food & nutrition.

South Dakota’s climate isn’t much of a deterrent for the outdoor grill’s functioning. “We’re kind of used to it, so we will run specials out there come rain or shine just to say we can do it,” laughs Brinker.

“They even run breakfast specials there,” adds McQuiston. “They’ve done an omelet bar on the outside grill that is really cool.”

What else is really cool is the amount of local product Regional Health and the Nourish kitchen use as reportedly 90% of the produce and 80% of the beef is from local sources.

“We have several farms growing for us, one specifically just for us,” Brinker says, “and we try to adapt our menus to what’s available at any given time. We also have a local cheese producer that makes all our cheeses.”

Even the fact that South Dakota’s is not exactly tropical climate doesn’t deter that emphasis much, as the hospital is able to get extended dry storage of crops for a time after cold weather sets in. “Last year we were able to serve things like fresh squash, beets, carrots and turnips all the way into late November and early December,” Brinker says. The hospital also uses the fresh ingredients to make things like salsa, pico de gallo and tomato sauce in bulk, he adds, but they usually don’t last long because they are so popular.

Rapid City Regional is a 417-licensed-bed facility. The patient dining program, based on Morrison’s on-demand room service platform, serves about 300 meals a day per meal period, including orders off the Nourish menu if a patient’s diet restrictions permit that.

Currently, Café Nourish is the only retail dining option at the hospital, but a new bistro type outlet is expected to open next year near the emergency department, McQuiston says.